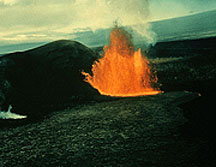 The Kilauea Iki lava lake during the first phase of the 1959 eruption. Details
On the morning of November 14, 1959, one of the most spectacular modern eruptions of basaltic magma occured in the Kilauea Iki pit crater on Kilauea, the newest and most active shield volcano on the 'big island' of Hawaii. Over the next 36 days, sixteen phases of eruptive activity released basaltic magma from surface vents halfway up the crater wall, which then flowed down into the crater. The erupting lava produced 'curtains of fire' and fire fountains reaching heights of 1,900 feet and filled the pit crater with lava to a depth of 365 feet. Throughout the eruption, USGS scientists monitored the volcanic activity and collected samples of the lava.

Drilling operations at Kilauea Iki. Details
Since the cessation of the eruption on December 20, 1959, the lava lake slowly began to cool. This allowed scientists an unprecedented opportunity to study an 'exposed' magma chamber of tholeiitic basalt, perhaps analogous to those at depth in the Kilauea magma reservoir. Drilling operations from the hardened surface of the lake were conducted in 1960-1962, 1967, 1975, 1976, 1979, 1981, and in 1988, resulting in a wealth of data concerning the thermal history and petrologic differentiation of the lava lake. To this day, Kilauea Iki remains the best studied lava lake in the world.


What happens to tholeiitic basalt as it cools and solidifies in small magma chambers? What minerals are precipitated, and how does the liquid change composition during crystallization? Students examine these questions with the use of the large Kilauea Iki dataset in this exercise.