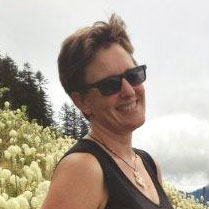 I am a professor of Geology and Oceanography at City College of San Francisco, where I have taught field, lab, and lecture classes since 1995. With degrees and training in the Earth and Ocean Sciences from Caltech and Oregon State University, and post-graduate work at Stanford University, my research background is in volcanic chemistry and processes. My field research experiences include tin-mineralizing granites in Australia, the Eyjafjöll Volcanic System in Iceland, and seafloor volcanism and hydrothermal vents in the Pacific Ocean offshore the Galapágos Islands and in the Atlantic off the Azores Islands. For the past 20 years, my primary focus has been on improving geoscience education at the college level, and towards this goal I have participated actively in national professional development programs.

Mineral Properties -- Learning through Experience part of Geoscience in Two-year Colleges:Activities
Students are each given a mineral and asked to locate all other students in the room with the same mineral (knowing there are a total of 5 different minerals). Once groups form, they need to decide what characteristics are similar for all their samples and ultimately report out to the whole class on their observations.

Pollution or fishing industry research project part of Integrate:Workshops and Webinars:Systems, Society, Sustainability and the Geosciences:Activities
Pick a particular type of pollution or fishing/commercial industry in the ocean. Describe its story – how humans are impacting global oceanic systems and how the ocean is responding.

Oceanography Lab (an introduction) part of Geoscience in Two-year Colleges:Courses
Lab class that meets 4 hrs per week (one day) -- the first hour starts with a 10-minute quiz on the previous week's lab, followed by hands-on group review of prereading preparatory lab assignment and then ...

Oceanography (an introduction) part of Geoscience in Two-year Colleges:Courses
Lecture class that meets 3 hrs per week (either 3 hrs/once a week at night or 1.5 hrs/twice a week) and covers the following topics. The ocean environment. Physical, chemical, biological, geological, and ecological ...

Preparing Students for Geoscience Careers -- CCSF part of SAGE 2YC:Workshops:Preparing Students in Two-year Colleges for Careers:Essays
After transferring to a 4YC, my 2YC students should feel competitive, confident, and supported. To achieve that goal means setting up a support network of faculty and fellow students and giving them strong foundational skills, knowledge, and experiences. It also means building career and workforce skills. Since I cannot supply all of this myself, I rely on colleagues at 4YCs and research labs and industry and consultants. And I strive to bring part-time faculty into my department who can help us stay fresh in what the workforce wants.

Katryn Wiese -- How I Make My Video Tutorials part of Videos:Videos Workshop 2014:Contributed Videos
This is a short how-to video meant to help people start making instructional videos of their own.

Igneous Rocks part of Videos:Videos Workshop 2014:Contributed Videos
How to classify and identify igneous rocks and what that tells us about the rock's formation environment and geologic history.

Minerals ID Addendum part of Videos:Videos Workshop 2014:Contributed Videos
How to classify and identify 5 minerals typically assigned to my lab class, but not my lecture.

Teaching Oceanography part of Earth Educators Rendezvous:Rendezvous 2020:Program:Roundtable Discussions
Oceans cover about 70% of the globe and have a major influence on all of Earth's systems. Teaching Oceanography integrates a wide range of disciplines including physics, chemistry, biology, and geology. ...

What Makes a Good Teaching Video? part of Earth Educators Rendezvous:Previous Rendezvous:Rendezvous 2016:Program:Panel Discussions
Summary Video is increasingly being used as an educational tool in college science courses. Even if we are not assigning videos, students are independently looking to places like YouTube to supplement their ...