Introduction to Nanoscience: Some Basics 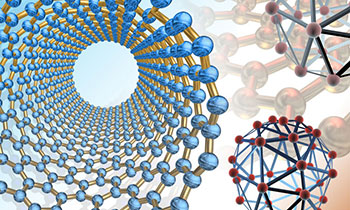 ×
Most of what we think we know about the properties of materials and chemical or mechanical processes on the macroscale is either wrong, or at least incomplete, at the nanoscale. The "rules" are completely different. Materials of a given composition exhibit different chemical and mechanical properties on the nanaoscale compared to the macroscale. Surface energies are very large with respect to volumes, and therefore, the energetics of reactions (and rates) are different because of the increased influence of surface energies (e.g., interatomic coulombic interactions). As an introduction to this brave new world of nanoscience, start with these resources from the National Nanotechnology Initative (Nano.gov) Nanotechnology 101.

See the online presentations on:

A nanometer is one-billionth of a meter. The National Nanotechnology Initiative provides some excellent comparisons of materials on different scales at Size of Nanoscale. The following are some graphics that demonstrate the relative size of numerous types of materials ranging from the nano- to the macro-scale. Nanomaterials have at least two dimensions that are between 1 and 100 nanometers in size. On this scale, interatomic (coulombic) forces become large, and must be considered when undertaking studies to characterize, experiment, and model the behaviors of nanomaterials. 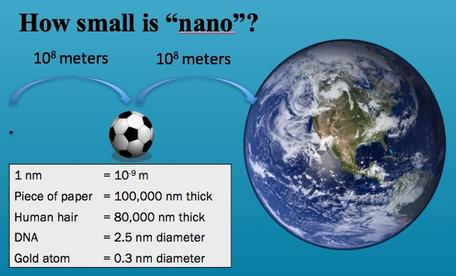 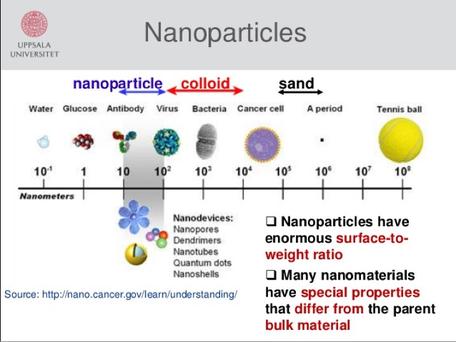 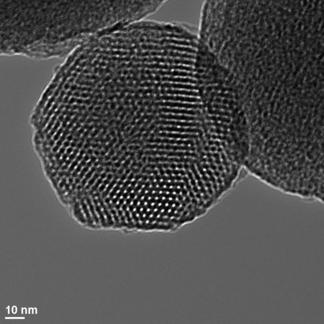 Provenance: Courtesey of Dr Victor Lin group at Iowa State University
Reuse: This item is in the public domain and maybe reused freely without restriction.
Nanomaterials (NMs) are functional materials consisting of particulates with at least one dimension below 100 nanometers (nm) (Grimsdale, A. C., and Müllen, K., 2005, The chemistry of organic nanomaterials: Angewandte Chemie International Edition, v. 44, no. 35, p. 5592-5629). 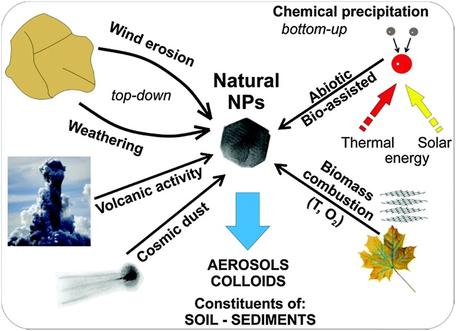 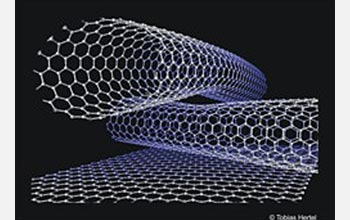 Provenance: Image from the National Science Foundation; Credit: Tobias Hertel, Institute for Physical Chemistry, University of Wurzburg
Reuse: This item is in the public domain and maybe reused freely without restriction.
Hochella et al., (2008) Nanominerals, mineral nanoparticles, and earth systems: Science, v. 319, no. 5870, p. 1631-1635, provide some useful definitions for the shapes of nanomaterials: Nanoparticles "are as small as ~1 nM and may range up to several tens of nanometers in at least one dimension".

New Understanding of the Nano-World: Contexts and Concepts

The nanoscience revolution requires a fundamentally new understanding of the properties of matter at the nanoscale. These concepts, their significance, and applications are explored in more detail throughout this website. Here are some contexts and concepts that require special consideration when dealing with the nanoscale compared with micro- or mesoscale: 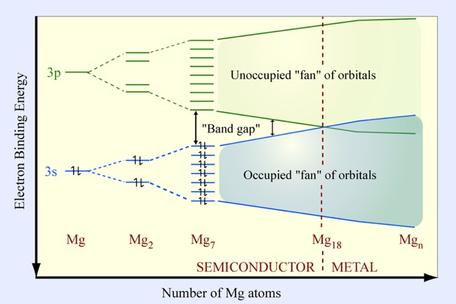 Processes that Occur on the Nanoscale

The interfaces between material surfaces and their environment at the atomic scale is where all the (chemical) action takes place! Some of the surface-mediated reactions that affect the rates and pathways of Earth processes and global biogeochemical cycling include: 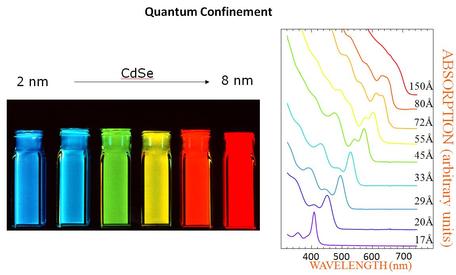 ×
" Semiconductor nanocrystallites (quantum dots, QDs) whose radii are smaller than the bulk exciton Bohr radius constitute a class of materials intermediate between molecular and bulk forms of matter. Quantum confinement of both the electron and hole in all three dimensions leads to an increase in the effective band gap of the material with decreasing crystallite size (Figure 1). Consequently, both the optical absorption and emission of quantum dots shift to the blue (higher energies) as the size of the dots gets smaller." See the detailed description of this phenomenon from the Bawendi Research Group at MIT.

Gold and silver nanoparticles also show size-dependence in their optical properties. An example of changing optical properties (color) as related to nanoparticle shape (prisms v. spheres) and size can be found at Dr. Shengli Zou's (Chemistry, University of Central Florida) website on Optical properties of nanoparticles and their applications. An explanation of this phenomenon, from the nanoComposix website on Nanoparticles: Optical Properties: "Gold nanoparticles absorb and scatter light with extraordinary efficiency. Their strong interaction with light occurs because the conduction electrons on the metal surface undergo a collective oscillation when they are excited by light at specific wavelengths. This oscillation is known as a surface plasmon resonance (SPR), and it causes the absorption and scattering intensities of gold nanoparticles to be much higher than identically sized non-plasmonic nanoparticles. Gold nanoparticle absorption and scattering properties can be tuned by controlling the particle size, shape, and the local refractive index near the particle surface". An example of the application of Au nanoparticles to biomedicine can be found in the article Gold and Silver Nanoparticles: Synthesis Methods, Characterization Routes and Applications towards Drugs byDhalid Alaquad and Tawfik Saleh, 2016, Journal of Environmental and Analytical Toxicology, 6:384. doi:10.4172/2161-0525.1000384

×
Classic theory of nucleation and growth of crystals assumes that crystals grow by ordering atoms (monomers) one at at a time in prescribed positions in the crystal structure. However, modern studies of growth mechanisms of crystals shows that crystals more typically grow by aggregation of nanoparticles. Crystallization pathways may involve formation of multi-ion complexes from dissociated ions, to organization of these complexes into isolated nanoparticles with very short range order, to oriented aggregates of nanoparticles, and ultimate formation of macroscopic crystals. Examples of this type of crystallization pathway of crystals forming from aggregates of nanoparticles can be found in calcium carbonates, calcium phosphates, ferric hydroxides and hydroxyl-sulfates, and aluminosilicate nanoparticles. For a more detailed description of crystallization by particle attachment (CPA), see DeYoreo et al., 2015, Crystallization by particle attachment in synthetic, biogenic, and geologic environments, Science, vol 349, issue 6247, aaa6760-1. 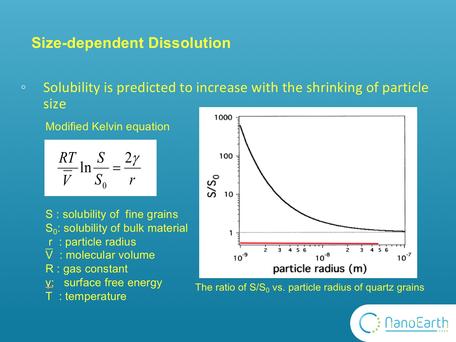 ×
One of the most important properties of nanominerals is solubility. The size effect on dissolution has long been described by this modified version of Kelvin equation.The Kelvin equation may be written in the form:
`ln(p/p_0) = (2gammaV_m)/(rRT)`
where p is the actual vapour pressure, p0 is the saturated vapour pressure, γ is the surface tension, Vm is the molar volume of the liquid, R is the universal gas constant, r is the radius of the droplet, and T is temperature. In the diagram, So is the solubility of the bulk (macro) material and can be substituted for Po. It is typically measured in conventional dissolution studies. S is the solubility of fine (nano-scale) particles and can be substituted for P. This equation indicates that, as the particle size decreases, the solubility is expected to exponentially increase. This plot shows the ratio of S to So vs particle radius for quartz grains. It was calculated according to this equation using the parameters of quartz grains. You can see that when the size is larger than 10-7 m that is 100nm, this ratio equals ~1. Nothing changes with the size. Only when the size goes down to the nanoscale, the ratio substantially deviates from 1 and the size effect on solubility can be observed. However, this equation was proposed based on theoretic calculation. Very few experimental studies have been reported to support it. The image and explanation was contributed by Michael Hochella, Virginia Tech, NanoEarth NNCI project. 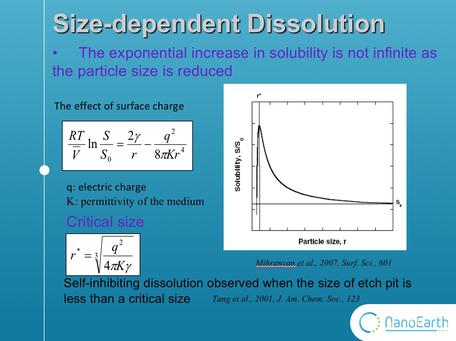 ×
But wait! There's more! In addition, the range of validity of the modified kelvin equation has been questioned. This equation is a correction to the kelvin equation. This added term shows the effect of surface charge. In this case, the increase in solubility is not infinite as the size is reduced. There is a critical size, which is always at the nanoscale. When the size is smaller than the critical value, the solubility will decrease with the shrinking of particle size. Moreover, a recent study found that dissolution slows down or even stop at undersaturation when the size of dissolution etch pit is smaller than a critical size. However, this study was conducted on bulk mineral surface, not on nanoparticles. Therefore, the size effect on dissolution is not totally understood. Our work is the first study to really see the dissolution of nanoparticles under microscope. (Tang et al., 2001, J. Am. Chem. Soc., 123).

Here are some examples of size-dependent dissolution reactions at the nanoscale:

We have a lot to learn about the solubility of particles at the nanoscale!