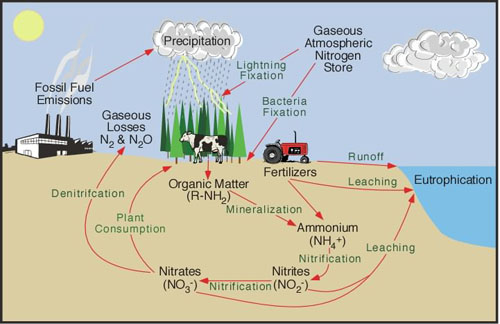 Hide
Figure created by Michael Pidwirny at Okanagan University College.
The nitrogen cycle represents one of the most important nutrient cycles found in terrestrial ecosystems. Nitrogen is used by living organisms to produce a number of complex organic molecules like amino acids, proteins, and nucleic acids. The store of nitrogen found in the atmosphere, where it exists as a gas (mainly N2), plays an important role for life. This store is about one million times larger than the total nitrogen contained in living organisms.
Nitrogen is an essential nutrient for all life on this planet. Although atmospheric nitrogen (N2) is abundant, the vast majority of organisms can use nitrogen only when it is combined with oxygen, hydrogen, or carbon. Only microorganisms are able to transform nitrogen from the abundant gaseous form to usable combined nitrogen compounds. There are specific types of microorganisms that are capable of carrying out different types of transformations, such as the oxidation of nitrogen compounds to nitrate or nitrite, the reduction of oxidized nitrogen compounds to ammonium, or the "fixation" of N2 from the atmosphere into ammonium.

Hide
Micrograph of diazotrophs by katsuki Adachi.
Bacteria that fix atmospheric N2 into biologically useable ammonium are referred to as "diazotrophic." These mainly plant-associated organisms provide an important mechanism for bringing "new" nitrogen into salt marsh ecosystems, where availability of nitrogen is often the most important factor limiting marsh productivity. While the process of nitrogen fixation in salt marshes has been studied for decades, the organisms responsible for this key activity remain poorly understood. Yet we do know that the diazotrophic Bacteria in these environments are extraordinarily diverse, and salt marsh diazotrophs include a large number of species that are apparently new to science. 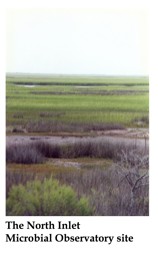 The North Inlet Microbial Observatory (NIMO) focuses on diazotroph diversity in a salt marsh ecosystem that is characterized by a very limited number of plant species. The plants largely occur as single species stands that form a strong zonation moving from the marsh's edge to higher elevations. Although the plant community is relatively "simple," there is a great diversity of plant root-associated diazotrophs. The vegetation zones occupied by the salt marsh plants are defined by specific physical, chemical, and biological parameters at those locations and these parameters also influence nitrogen fixation. 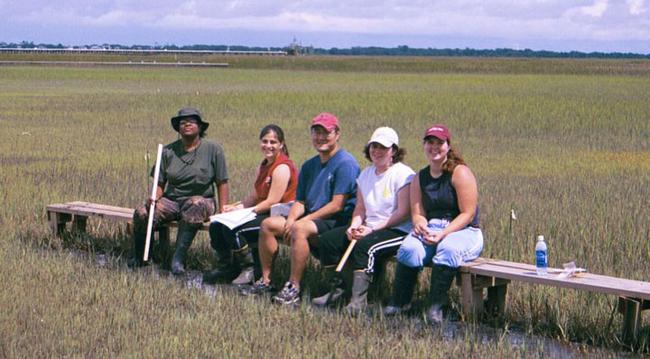 Copyright on all images and material by Charles R. Lovell 2005.