Hide
The Point Lobos crew and MBARI scientists from the Biological Oceanography Group manning the CTD, used for collecting water and oceanographic data from the water column on the left, and the locations of three stations in Monterey Bay that are sampled during monthly cruises in an onshore-to-offshore transect.

Previous efforts by the DeLong Lab in Monterey Bay have generated large-insert genomic "libraries" from genomic fragments of Monterey Bay microbes (each "book" in the library containing a large fragment of the DNA from a single marine microbe from the Bay). These libraries have been characterized extensively, both phylogenetically (what type of organisms are there?) through surveys of rDNA genes and functionally (what might they be doing?) through surveys of genes known to be involved in, for example, pulling carbon dioxide out of the atmosphere and turning it into cellular building blocks, or capturing sunlight and transforming it into energy. In the Monterey Bay Microbial Observatory the genomic information in the libraries is now being used to develop microarrays targeting specific microbes within the Bay, to allow a high-throughput means for studying their ecology in the Bay across space and time. (Current technologies allow the tracking of one or a few microbial groups but not representatives across the whole community.) DNA samples from several sites and depths in Monterey Bay are collected and archived monthly by the DeLong Lab group, in conjunction with the MBARI Biological Oceanography Group's regular CTD cruises. The microarrays will be used to query these time-series DNA samples, in order to identify some of the organisms present in each sample and track their changes across depth, space and over time. 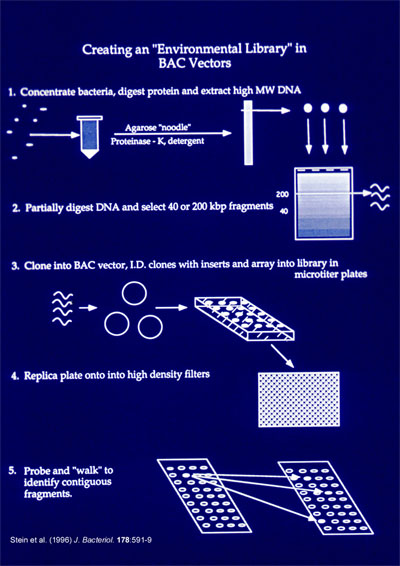 "Analysis of large genome fragments recovered directly from microbial communities represents one promising approach for characterizing uncultivated microbial species. To determine the utility of this approach, the lab constructed large-insert bacterial artificial chromosome (BAC) libraries from the genomic DNA of planktonic marine microbial assemblages. The BAC libraries we prepared had average insert sizes of 80 kb, with maximal insert sizes > 150 kb. A rapid screening method assessing the phylogenetic diversity and representation in the library was developed and applied. The introduction of bacterial artificial chromosome (BAC) cloning vectors has dramatically improved genomic cloning efforts. BACs are modified plasmids that contain an origin of replication derived from the Escherichia coli F factor. The replication of the BAC vector is strictly controlled, keeping the replicon at one or two copies per cell. Initial reports of BAC development and characterization (Shizuya et al., 1992) demonstrated that these vectors can stably maintain and replicate inserts larger than 300 kb. Shizuya et al. (1992) also suggested that BAC vectors display a low level of chimerism as a result of two genes carried on the plasmid (parA and parB). More recently, BAC vectors have been demonstrated to stably maintain inserts as large as 600 kb (Zimmer and Gibbins, 1997)."
(text from (Beja et al., Environmental Microbiology 2000, 2(5), 516-29))

DNA Microarray (Genome Chip): "An array is an orderly arrangement of samples. It provides a medium for matching known and unknown DNA samples based on base-pairing rules and automating the process of identifying the unknowns. An array experiment can make use of common assay systems such as microplates or standard blotting membranes, and can be created by hand or make use of robotics to deposit the sample. In general, arrays are described as macroarrays or microarrays, the difference being the size of the sample spots. Macroarrays contain sample spot sizes of about 300 microns or larger and can be easily imaged by existing gel and blot scanners. The sample spot sizes in microarray are typically less than 200 microns in diameter and these arrays usually contain thousands of spots. Microarrays require specialized robotics and imaging equipment that generally are not commercially available as a complete system. DNA microarray, or DNA chips are fabricated by high-speed robotics, generally on glass but sometimes on nylon substrates, for which probes with known identity are used to determine complementary binding, thus allowing massively parallel gene expression and gene discovery studies. An experiment with a single DNA chip can provide researchers information on thousands of genes simultaneously - a dramatic increase in throughput."

Using a microarray design approach developed by the DeRisi Lab at The University of California San Francisco for identifying and tracking viruses involved in human illness, the lab designed microarrays specific to the fragments of microbial DNA captured in the DeLong Lab genomic libraries. When tested against their perfect match target DNA, these microarrays show hybridization under standard conditions, and also can discriminate between closely related microbes (see image under "Data products"). Arrays are being further tested in the lab with increasingly complex mixtures of DNA, and diminishingly small amounts, to determine where the limit of detection is for this array, and also to develop the optimal DNA amplification protocol to allow us to work with environmental DNA samples without skewing the community composition captured.

Above a comparison is shown of the signal generated from two sets of probes designed to two closely-related (98% identity at the rDNA level) syntenic SAR-86 genome fragments, when queried with the DNA from the genome represented by the probes on the left. There is very little cross-hybridization with the other non-related probe sets in this experiment.


Copyright on all images and material by Ed DeLong, 2005.