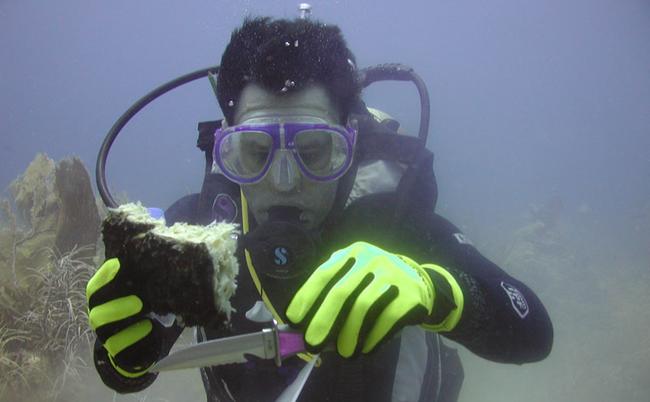 Research conducted at this Microbial Observatory will enhance understanding of large-scale microbial diversity by focusing on the diversity of microbial communities in the microcosm of sponges. The project has great potential for discovery of new marine bioactive compounds. Marine sponges have been shown to be a prolific source of these valuable compounds, many of which may be derived from the associated microbes. The project will contribute to a fundamental understanding of the scope and function of signaling compounds produced by bacteria, which can be applied in efforts to manipulate bacterial behavior by interference with signaling pathways. Elucidation of these compounds and signaling pathways has untold potential for development in industrial and medical applications.

Hide
Image on left is of Dr. Feng Chen, Anthony Agyapong, and Ammar Hanif taking a plankton sample from the Chesapeake Bay. Image on right is of Dr. Russell Hill explaining PCR amplification of DNA to a group of students.

Copyright on all images and material by Russell Hill, 2005.