Back to Teach Systems Thinking »

What is Systems Thinking?

This page builds on ideas and outcomes from faculty discussions at the workshop, Systems, Society, Sustainability and the Geosciences, held in July 2012. 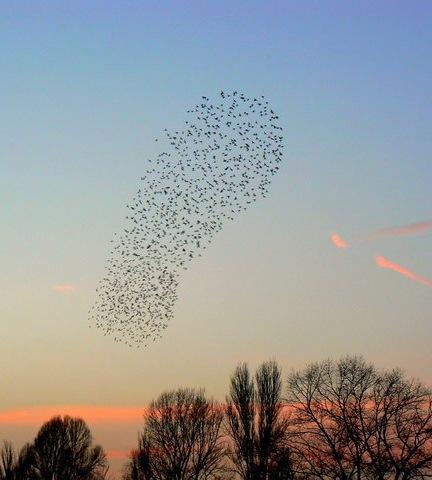 Hide
A compact flock of starlings swarms in the sky prior to roosting. The patterns created by a flock of birds is an example of an emergent behavior of a system. Copyrighted image by Brian Robert Marshall, reuse allowed under Creative Commons license.

Provenance: Copyrighted image by Brian Robert Marshall, reuse allowed under Creative Commons license.
Reuse: This item is offered under a Creative Commons Attribution-NonCommercial-ShareAlike license http://creativecommons.org/licenses/by-nc-sa/3.0/ You may reuse this item for non-commercial purposes as long as you provide attribution and offer any derivative works under a similar license.
Systems thinking is the study of complexity and the relationships and interactions among components of a system. Systems thinking is often introduced with the phrase, the whole is more than the sum of its parts.

Today's grand challenges cut across human and natural systems, involve multiple interdependent variables that are changing over time, and imply future changes that are both critically important yet complex to predict. These qualities are some of the defining characteristics of systems thinking, which is an essential tool for teaching and learning about societal challenges such as energy, climate change, food resources, poverty and hazards.