How do soils form in different places?

Soils around the world have different properties that affect their ability to supply nutrients and water to support food production, and these differences result from different factors that vary from place to place. For example the age of a soil -- the time over which rainfall, plants, and microbes have been able to alter rocks in the earth's crust via weathering-- varies greatly, from just a few years where soil has been recently deposited by glaciers or rivers, to millions of years in the Amazon or Congo River Basins. A soil's age plus the type of rock it is made from gives it different properties as a key resource for food systems. Knowing some basics of soil formation helps us to understand the soil resources that farmers use when they engage in food production. Below are some of the most important factors that contribute to creating a soil:

A Summary of Soil Formation: The Global Soils Map

These four factors along with the vegetation, microbes, and animals at a site, create different types of soils the world over. A basic global mapping of these soil types is given below in Fig. 5.1.2 We've attached some soil taxonomic names (for soil orders, categories used by soil taxonomists) to these basic soil types for those who are familiar with some of the terminology of soil classification. We should emphasize that understanding these orders is not essential to your understanding of food production and food systems, as long as you understand how the basic processes of soil formation described above, and the properties of soils described on the next page, contribute to the overall productivity of a soil. You should think about how the soil formation processes affect crop production in your capstone regions of your final project, and you should be able to find resources on how soils were formed in any place in the United States and around the world. 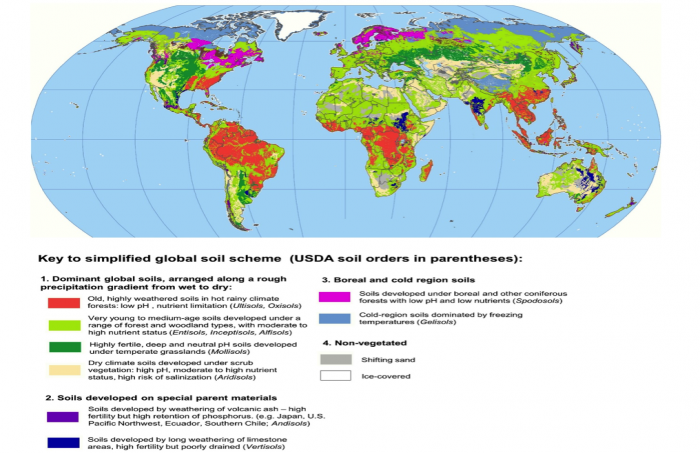 Another important point is that soil formation processes described above largely determine only the initialstate of a soil as this passes into human management as part of a coupled human-natural food system. Human management can have equally large effects as soil formation on productivity, either upgrading productivity or destroying it. The best management protects the soil from erosion, replenishes its nutrients and organic matter, and in some ways continues the process of soil formation in a positive way. &We'll describe these best practices as part of a systems approach to soil management in module 7. Inadequate human management can be said to "mine" the soil, only subtracting and never re-adding nutrients, and allowing rainfall and wind to carry away layers of topsoil.

The next page adds to this description of soil formation by focusing in on the basic properties that affect food production on soils, like acidity and pH which is discussed above.

Check Your Understanding: The Nature of Soil and Soil Formation

Answer the following questions on basic properties of soil and factors of soil formation:

The two basic types of chemical nature of materials in the solid part of soils (i.e. not air and not water) are mineral and __________.

Soils with what type of rock tend to resist the natural process of acidification that happens to soils in many climates?

Hide
ANSWER: These soils are relatively young. An additional note: this is especially true because of recent (100,000 to 10,000 years B.P.) glaciation and exposure of new ground rock and silt by glaciers that created the conditions for the formation of these young soils all through the temperate regions.

Which of the following is likely to have a low level of organic matter and why? A dry climate soil or a wet climate soil?

Hide
ANSWER: the dry climate soil, because plant growth is limited and there is less dead plant material going into the soil