These student materials complement the Coastal Processes, Hazards and Society Instructor Materials. If you would like your students to have access to the student materials, we suggest you either point them at the Student Version which omits the framing pages with information designed for faculty (and this box). Or you can download these pages in several formats that you can include in your course website or local Learning Managment System. Learn more about using, modifying, and sharing InTeGrate teaching materials.

Geologists have argued that extreme periods of erosion and deposition of large volumes of sediment to the ocean can elevate sea levels.

Erosion and sediment transported by wind, water, and ice can deliver sediments to the ocean and, although the impact is seemingly small, when averaged globally, a significant volume of sediment is delivered, and this can displace an equally significant volume of water. Think about it. If you cook a pot of pasta, and you fill the pot full of water and then add the pasta, what happens?

Locally, this newly deposited sediment will often produce an area that shows evidence of shallowing as sediment builds up to sea level. In the case above, your pasta will cause the water to become shallower, even though the water volume is the same -- right? Ultimately, depending on the distribution of the sediment load once it reaches the sea and the delivery rate, the seafloor can also subside (seafloor subsidence) under the weight of the deposited sediments, producing evidence of rising local/regional sea level.

So, when we consider sea level change for some areas - especially in deltas (i.e., Nile River Delta, or the Ganges River Delta, etc.) or in areas near glaciated terrains, we may see evidence for sea level shallowing as sediments fill up available space in the nearshore. However, water can also be displaced from these local areas producing higher sea levels elsewhere. Depending on the geography of tectonic plates and global climate processes, this effect appears to be strong and significant during certain times, and less significant at other times. Once sediments are delivered to the ocean, these sediments are reworked and moved by erosion processes. Storm activities, in particular, can influence local sea level patterns through the impact of erosion and re-mobilization of sediments.

Along many coastlines, coastal processes often act to produce piles of sediments that can build up to form barrier islands just off the mainland, especially in areas where tectonic activity is minimal. Refer back to Unit 2 for more details. So called passive tectonic margins (i.e., the East Coast of the United States) often respond to storm activity and sea level change in sometimes destructive ways. See this USGS photo. Barrier islands tend to build up, grow and expand above sea level when sea level remains stable, or even when sea level drops. However, when sea level changes (i.e., increases), these sediments are often reworked back into the sea where they can displace water. See Figure 4.20. 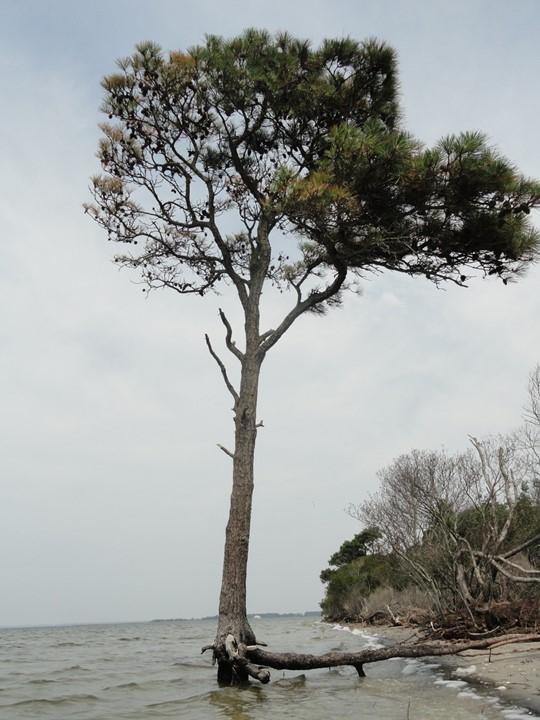 ×
Figure 4.20: Assateague Island, VA This photo shows a Loblolly Pine Tree (Pinus taeda) just after Hurricane Irene in September 2011. Prior to the storm, this tree and others were growing in the back beach area meters from the shoreline, but severe erosion during the storm eroded the beach and dunes in front of the tree and pushed the shore position landward. In the image, the tree appears to be growing in salt water, but, obviously, the tree didn&#039;t move, but the sediment and soil within which it was growing did. These sediments now reside on the sea‐floor when they were formerly above sea‐level.

In the USGS article above, Dauphin Island, Alabama, a barrier island on the Gulf Coast of the U.S., experienced significant over-wash during Hurricane Katrina. Hurricane Katrina's wave activity and storm surge bulldozed the island and many islands along the Gulf Coast. The storm pushed sediments that were once above sea level into the backshore bays and pulled some of the sediment offshore. Was this single storm impact enough to influence sea level elsewhere? Again, it is unlikely that a single storm could produce a pronounced impact on global sea level, but, locally, the impact could be measurable. So, depending on the rate that these sediments are moved and the volume of sediment globally that is eroded from above sea level and re-deposited below sea level, the impact could be noticeable. If the frequency of storm activity increases, especially over wide areas, the cumulative impacts of barrier island sediment reworking could be noticeable on a larger scale, but research is still ongoing on this topic.