These student materials complement the Climate of Change Instructor Materials. If you would like your students to have access to the student materials, we suggest you either point them at the Student Version which omits the framing pages with information designed for faculty (and this box). Or you can download these pages in several formats that you can include in your course website or local Learning Managment System. Learn more about using, modifying, and sharing InTeGrate teaching materials.

In this unit, we will run our own simulation of a climate model in class and consider what would happen over time in response to various forcing mechanisms. You will also examine the challenge of making predictions within a system as complex as climate. You will learn how feedbacks and thresholds work and how they create relationships between system components which can be straightforward to understand in some cases and more challenging in others, much as the relationships in a family. As a human being, you are part of this system, along with things like precipitation, plate tectonics, and greenhouse gases. Though getting to know your climate family in Unit 5 might not enable you to see into the future, it will allow you to understand the shape our future might take!

At the end of this reading, you should be able to: 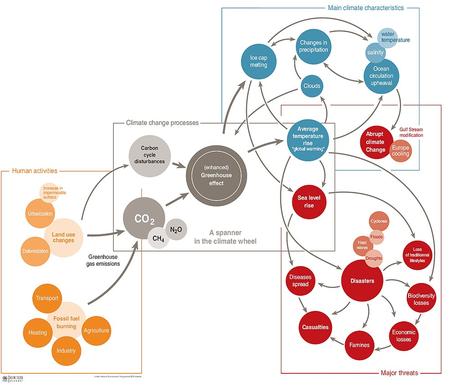 Provenance: UNEP GRID-Arendal
Reuse: This item is in the public domain and maybe reused freely without restriction.
Prediction is a complicated process, and climatologists do not have the gift of divination! We use the climate data we have (from the geologic record and direct measurements of the atmosphere and oceans) and the way we know climate components interact to build a model of how our climate system works. This task is further complicated by thresholds and feedbacks (see Case Study 5.1 reading below), but once we simulate the climate inside a computer and test it against independent data, we are able to see how our future might develop. Often a GCM (Global Climate Model or General Circulation model) is forced to run many different simulations, or experiments, to allow us to examine the response of climate to many different possible scenarios. The outputs from each of the simulations represent the outcomes of different choices we could make now that will affect our climate in years to come.

Though our focus is commonly on changes in the near future, we must remember that Earth is continually changing and has been for 4.6 billion years. Temperatures on our planet have changed much before. Sometimes these changes are regional: one area of the world might experience a temperature increase while another might experience a temperature decrease. The average global temperature will change when there is a change in the balance of incoming and outgoing energy in the atmosphere (i.e., Earth's 'energy balance'). 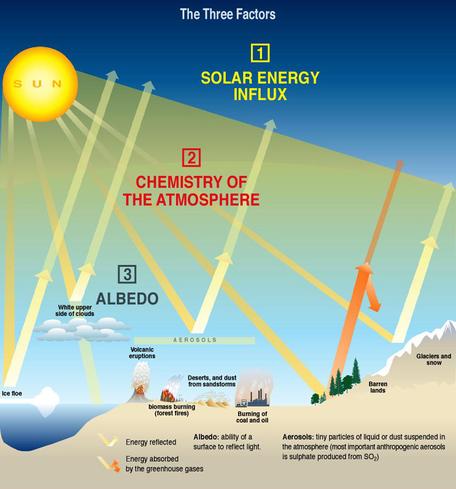 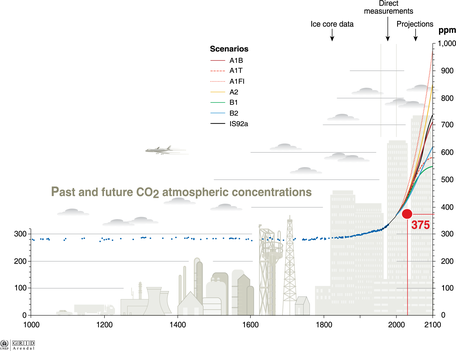 Provenance: UNEP GRID-Arendal
Reuse: This item is in the public domain and maybe reused freely without restriction.
This graph shows atmospheric carbon dioxide concentration data for the past and projection for the future. Arrows distinguish measurements interpreted from the geologic record, taken directly from the atmosphere, and projected using models. (This image is already out-of-date, since our atmosphere has now reached and surpassed 400 ppm CO2.)

Intimate interplay of the atmosphere, hydrosphere, cryosphere, biosphere, pedosphere, and lithosphere comprise our climate system. Like a food web, the system involves mechanisms from each of Earth's spheres at varying scales, resulting in the temporal and spatial variation we experience in Earth's environments.

The terms for cause and effect in the climate system are forcing mechanism and climate response. Sometimes the relationship between forcing and response is regular: forcing occurs and a change occurs. Sometimes, however, forcing must occur multiple times or for an extended period of time before the change occurs, just like how you can continue to squeeze a balloon until it pops. The pressure required to cause popping is a threshold. The point at which enough climate forcing has occurred and climate change begins is a climate threshold. 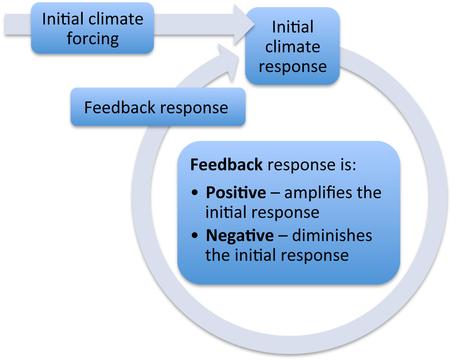 Provenance: Cynthia Fadem, Earlham College
Reuse: This item is offered under a Creative Commons Attribution-NonCommercial-ShareAlike license http://creativecommons.org/licenses/by-nc-sa/3.0/ You may reuse this item for non-commercial purposes as long as you provide attribution and offer any derivative works under a similar license.
A climate feedback is a specific set of interactions, the result of which impacts the initial climate response. As you can see in the feedback diagram, this process can either lessen or intensify the initial climate change. If a change in climate sets into motion a series of events that causes the initial change to intensify, the feedback is positive. A negative feedback results when a change in climate involves responses that lessen that initial change. 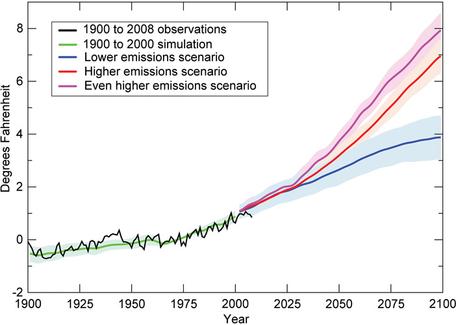 Hide
Observed and projected changes in global average temperature under three no-policy emissions scenarios. The shaded areas show the likely ranges while the lines show the central projections from a set of climate models. A wider range of model types shows outcomes from 2 to 11.5°F. Changes are relative to the 1960-1979 average. Source: USGCRP 2009

Provenance: Science. ISSN 0036-8075 (print), 1095-9203 (online) (http://www.sciencemag.org/content/331/6018/700/F1.expansion.html)
Reuse: This item is offered under a Creative Commons Attribution-NonCommercial-ShareAlike license http://creativecommons.org/licenses/by-nc-sa/3.0/ You may reuse this item for non-commercial purposes as long as you provide attribution and offer any derivative works under a similar license.
Climate modeling gives us the ability to watch the climate relationships we currently understand play out in a simulated world. Climate models are constructed from computer codes, where equations and numerical algorithms represent the processes, interactions, and feedbacks in the climate system. We force the model with a change that might occur in our climate system (such as a change in solar output, or a change in atmospheric composition), and the model will compute the effects of this change on the climate system. This allows us to see what our future would look like depending on changes that occur today or choices the world may make. The figure to the right shows various climate model projections of temperature, based on several possible scenarios.

Provenance: Anthony Gow/USACE/NOAA 2001
Reuse: This item is in the public domain and maybe reused freely without restriction.
To geologists, this planet of ours is not just a place where wondrous things happen every day. The Earth we study is a dynamic system, constantly producing the environments we all experience while simultaneously writing its autobiography. The layers in sand dunes, glaciers, and lake bottoms are pages of this book. 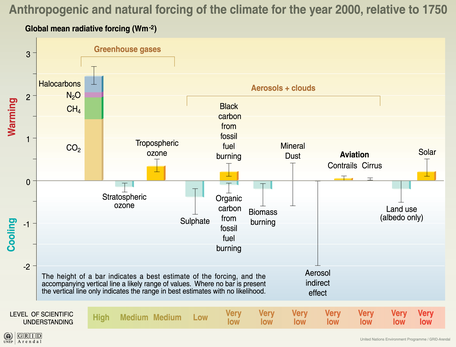 Provenance: UNEP GRID-Arendal
Reuse: This item is in the public domain and maybe reused freely without restriction.
Geologists and climate scientists translate these tomes, so that everyone can learn Earth's story. Just as we read of the world of dinosaurs, the life of the ancient seas, and lush jungles that have turned to deserts, so too do we read of changes in the skies above them. The temperature ranges and precipitation patterns that govern life today were no less important in the past. Glacial ice is a vast repository containing snow that once fell, dust that flew through the air, and bubbles that are tiny samples of the ancient atmosphere. The ice core pictured here is just one excerpt from the book, with each layer of ice preserving one year of Earth's story. 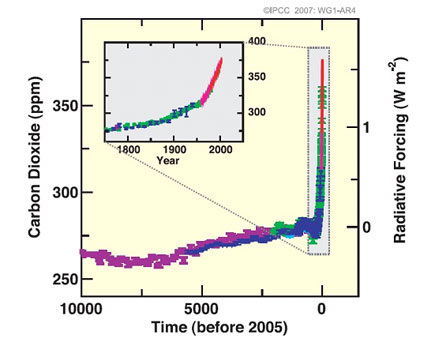 Provenance: IPCC
Reuse: This item is in the public domain and maybe reused freely without restriction.
Both geologic and modern records show that changes in the relative amount of greenhouse gases (ghg) in the atmosphere covary with relative changes in mean annual temperature. Because these molecules have the power to block the transmission of heat energy, or radiation, and keep it from leaving our atmosphere, they are a radiative forcing mechanism.