Students will conduct a virtual exploration of Harrier Meadow, a saltmarsh in the New Jersey Meadowlands. They will identify its vulnerability to pollution, its tidal connection to the Hackensack Estuary and the Atlantic Ocean along with its proximity to New York City. Vegetation patterns within this wetland will be explored, focusing on a salinity tolerant native plant (Pickleweed) that is returning to the marsh. The return of such native species is critically important to wetland restoration efforts that aim to reclaim native habitat following decades of environmental degradation since the industrial revolution. These vegetation patterns are the focus of resistivity and electromagnetic surveys that the students explore in the subsequent units of this module. The geophysical surveys aim to better understand the underlying factors controlling the distribution of Pickleweed. By understanding where the Pickleweed is thriving, restoration efforts could subsequently be improved by locating regions of such wetlands with similar underlying factors where Pickleweed (and other native plants) could be successfully reintroduced. In the first unit of this module, students will use Google Earth (on the web), high-resolution video acquired from an Unmanned Aerial Vehicle (UAV) and an ArcGIS Storymap in their exploration. Primary outcome: students comprehend the association between salinity and Pickleweed and formulate plans to test a hypothesis for Pickleweed persistence/patterning in Harrier Meadow that will ultimately be implemented using near surface geophysical methods in the remaining units of the module.

Students will be able to:

This unit is designed as a guided learning project that is best used as an introductory lab. It is the first of a sequence of 5 units and designed to take approximately 1.5 hours, with students doing independent exploration in Google Earth. The target audience is first year or sophomore earth and environmental science students with little prior experience with near surface geophysics. However, the materials could be adapted and used by faculty teaching an upper level undergraduate course in geophysics. The materials needed to use this unit are all available from embedded links. This unit could also be adapted as an independent (of the remaining units) module to teach concepts about environmental degradation and restoration.

Students should be familiar with the concept of formulating a hypothesis for testing with scientific datasets.

A background on the Meadowlands

The NJ Meadowlands and Hackensack River Estuary region lie directly between New York City and the city of Newark NJ. Expansive urbanization of this natural marsh system occurred as a result of the industrial revolution. This urbanization resulted in decades of illegal dumping, extensive infilling of wetlands as landfills throughout the region and the introduction of resilient invasive species. The results of these activities included heavily contaminated sediments, highly diminished water quality, and overall acute loss of natural resources. The formation of the Environmental Protection Agency (EPA) and the implementation of the Water Act led to some revival of the Hackensack River Estuary. Local government began to recognize the value of the Hackensack River and its various salt marshes that reside alongside it. You can learn more about the history of this urban region here: An Environmental History of the NJ Meadowlands. Students will need to study this resource (or a subset of it if the instructor prefers) to answer the questions in Section 1.1. of the assessment. 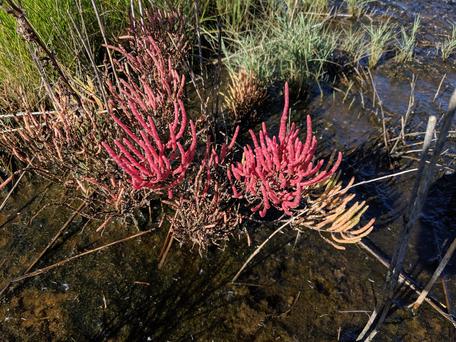 ×
Figure 1: A close up photograph of Salicornia (Pickleweed) taken in Harrier Meadow

Provenance: Lee Slater, Rutgers University-Newark
Reuse: This item is in the public domain and maybe reused freely without restriction.

Salt Marshes of the Meadowlands

As the area is influenced by the tides, brackish water reaches upriver and inundates the salt marsh habitats diurnally. Students will confirm this tidal influence by tracing the surface water connection between Harrier Meadow and a tidal monitoring location [Amtrak RR Swing Bridge] on the Hackensack River. They will also investigate the tidal range recorded on the Hackensack River at this location. A printable map (PowerPoint 2007 (.pptx) 1.1MB Apr10 20) is provided as a PPT file for students to draw on this tidal connection.

These salt marshes provide important ecosystem services including habitat for countless organisms from crabs to wading birds, filtration of water that improves regional water quality and carbon sequestration. Furthermore, the salt marshes serve as a crucial buffer against rising sea levels driven by climate change. Today, efforts are directed at reinforcing the natural functioning of these marshes. One strategy is to maintain and proliferate native plant species that can compete with invasive species. Salicornia genus (common name: Pickleweed) is a native species within the Hackensack Estuary. Pickleweed is a salinity tolerant plant so it can potentially flourish in high salinity and conductivity environments that are possible in tidal salt marshes such as Harrier Meadow, being the study site for this module. Figure 1 shows a close-up of a Pickleweed plant in Harrier Meadow, highlighting its characteristic bright red color. 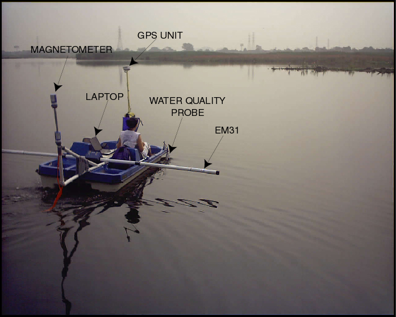 Hide
Figure 2: Geophysical sensors including a magnetometer and a electromagnetic device for measuring electrical conductivity of sediments were used to map contamination from landfills in Kearny Freshwater Marsh

Provenance: Lee Slater, Rutgers University-Newark
Reuse: This item is in the public domain and maybe reused freely without restriction.

A quick exploration of the vicinity of Harrier Meadow by students using Google Earth will reveal its proximity to two of the major landfills that were created in the region by infilling of natural wetlands with garbage from New York City and its surroundings. Use Google Earth imagery for Harrier Meadow to explore the vicinity (note that it will be easier to switch to 2D view mode). Scroll to the north a little and you will locate the Erie Landfill (an active landfill) evident from all the dirt roads traversing it. Immediately south of Harrier Meadow, you will encounter the large 1-E Landfill that is raised high above the surrounding wetlands. Just south of the 1-E Landfill, you will find Kearny Freshwater Marsh, a natural freshwater marsh that is also partly infilled by the Keegan Landfill in its southern most section. Students will also take an unmanned aerial vehicle (UAV) or 'drone' flyover of Harrier Meadow (high resolution (MP4 Video 451.9MB Mar18 20) and low resolution (MP4 Video 272.1MB Mar18 20) versions of the video are available depending on internet speed). The flyover captures the close proximity of the 1-E Landfill and surrounding industries, further highlighting the urban setting of this wetland. It also highlights some of the vegetation patterning that is the focus of this geophysical investigation. Patches of Pickleweed can be identified from orange patches in the video. Note that the starting viewpoint and angle for the Google Earth exploration is approximately the same as the starting view point and angle in the video.

Following completion of the Google Earth and UAV exploration, students explore the ArcGIS Storymap that will be used to overlay geophysical datasets in the subsequent units.

A major problem with landfills is the release of plumes of contaminated water into surrounding natural systems. This problem is enhanced in the NJ Meadowlands as the landfills are in direct contact with the groundwater. Geophysical methods have been used to investigate how Kearny Freshwater Marsh has been impacted by plumes discharging from the landfills. Figure 2 shows an undergraduate researcher from Rutgers University Newark performing geophysical surveys (including electromagnetic induction that students will explore in this module) to map such contamination in Kearny Freshwater Marsh just to the south of Harrier Meadow.

The main part of this exercise involves the students exploring Harrier Meadow using Google Earth and the high-resolution video flyover from a drone. Students should get a sense of the urban setting and the link between these degraded wetlands and New York City. This link is nicely demonstrated in the panoramic video, as New York City is clearly visible in the background. Following this exploration in Google Earth and using the video provided, students should visit the ArcGIS Storymap, which is returned to in subsequent units throughout this module.

The Pickleweed vegetation that becomes the focus of the geophysical survey cannot be clearly resolved in the Google Earth images but is strikingly clear to most viewers in the video (where it appears orange). The high-resolution photograph in the ArcGIS Storymap shows the distribution of the Pickleweed in Harrier Meadow even better (as bright red). Note, however, that approximately one in 12 males and one in 200 females are red-green colorblind; for these people, there is no visual difference between the pickleweed and other vegetation in the imagery. (If you have "normal" color vision, you can use this color blindness simulator to see what the images look like to people with many different kinds of color vision deficiencies.) One way to accommodate students with colorblindness is to have students work in pairs or small groups to delineate pickleweed distributions. Alternatively, you could provide an annotated image of the pickleweed distribution in Harrier Meadow to all students, so that they are all working with the same data.

The unit ends by introducing a (testable) hypothesis for the distribution of the Pickleweed and asks students to think about how to test it. This is designed to lead into Unit 2 where electrical resistivity-based geophysical methods are introduced.

For instructors and students

An Environmental History of the NJ Meadowlands This detailed article describes the original natural wetland system prior to the industrial revolution and documents the environmental degradation and land use change that has occurred. Students should review this (or an abridged version if the instructor prefers) in order to answer questions in Section 1.1 of the student assignment.