Sarah Hall: Using Surface Process Hazards in Geology and Humanity at College of the Atlantic 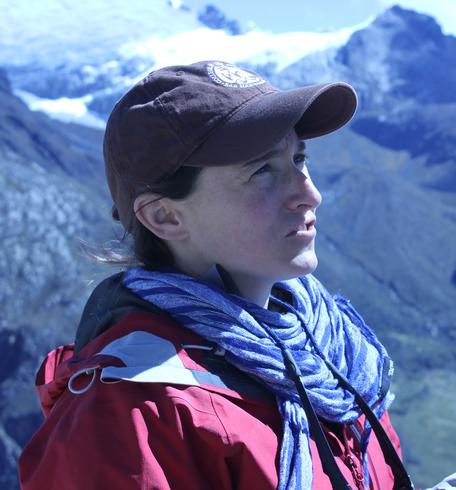 Provenance: Zabet NeuCollins (College of the Atlantic)
Reuse: This item is offered under a Creative Commons Attribution-NonCommercial-ShareAlike license http://creativecommons.org/licenses/by-nc-sa/3.0/ You may reuse this item for non-commercial purposes as long as you provide attribution and offer any derivative works under a similar license.

Two 85-minute classes and one 1.5-hour work session per week

Hide
In this course we will explore how geology has played a major role in human history and culture over multiple temporal and spatial scales. We will explore the underlying geological processes forming and influencing our environment and how this relates to human migration and settlement patterns, political boundaries, geohazards, resources, the modern landscape, and agriculture. This course will appeal to students interested in exploring connections between geology and other subject areas, or who are curious about humanity's place in geologic time. This course will implement readings from a range of sources: geologic textbooks, excerpts from short historical texts, and scientific journal articles. We will use class time in a variety of ways: lecture-based, seminar-style discussion, and laboratories spent visiting local field sites. Students will be evaluated based on their performance on weekly problem sets or writing assignments, a midterm quiz, as well as a term project with both oral and written presentation components. Level: Introductory. Prerequisites: none. Class limit: 16. Meets the following degree requirements: ES

Hide
Learning Goals:
1) Be able to describe important Earth systems and how they interact
2) Be able to read and use topographic and geologic maps as well as identify landforms using remote data (e.g. aerial images).
3) Be able to discuss how past geologic environments and events influence today's surface morphology, resource distribution, geohazards potential, settlement/trade networks, and climate.
4) Be able to critically evaluate societal issues that involve a connection to Earth Science and Geologic Time.

The course I taught is an introductory geoscience course called Geology and Humanity. There is quite a bit of emphasis on the environment, geohazards, and natural resources as this course is designed to both introduce students to principles of geology but also help them realize the connections between geology and human society. We meet twice a week, usually with one 1.5 hour lecture and one 1.5 hour activity period. Students also meet for ~1-1.5 hours per week outside of class to continue working on the activity with myself or a TA. While we did have a few labs involving rock ID and map reading, much of this course was text based. Students used a general introductory geology textbook, but also read multiple selections from scientific papers, news articles, and popular science literature. We had regular class discussions around the reading material.

I used this module towards the end of my course as a capstone project because it involved many of the topics we touched on briefly during the course. The students enjoyed the regular activity as this module contains both some lecture material as well as a great deal of in-class work material. They were engaged during the class periods and were happy to work through the material at their own pace and with classmates. When talking about the future, students are not very optimistic given the certain issues associated with population growth, climate change, etc., but this module helped them see what we are currently doing to plan, prevent, and prepare for certain geohazards. They told me they felt empowered by their new awareness of both the potential for mass-wasting in different environments the advances in scientific understanding and community planning occurring in response.

I enjoyed watching the students gain confidence and identify as scientists as they learned to recognize landscape features using different types of remote data and ask important questions about potential mass-wasting hazards for specific regions.

I usually supplemented the module material with local/regional examples that students were familiar with. I used hillshade, aspect, relief, topographic and aerial imagery of our region to facilitate landform identification.

My course was 10 weeks long. I implemented the module in the last 3 weeks of the course. We briefly covered rock types, geologic maps, topographic maps, earthquakes, volcanoes, climate and natural resources in the weeks prior to implementation of this module. We talked a lot about geohazards and population growth in the weeks preceding the module. These topics were revisiting while moving through the module. The first four units we completed in class together, the fifth unit (summative assessment) the students completed on their own outside of class.

For units 1 - 4 we began each class discussing the work completed in the previous unit. I assessed on the fly during the class time by walking around and asking them questions about their work. I had students do "pop-up" presentations, just 2-3 minutes to report out what their group had discussed or found on a map area. This saved time and allowed for students to be taught/assessed by their peers.

I wanted the students to be able to describe landscape features based on various remote data and then link the landscape type to distinct regional geologic forces (climate and tectonics) and suggest types of hazards that region might be prone to. I do think this goal/vision was achieved, although through both this module and work we did during the rest of the course. I envisioned students doing a bit more research on one of these map areas (a case study of one of the slide events), but we didn't have time for this. Through researching a case study of an event, students would be exposed to different types of literature (news, scientific, blogs, photos, maps) and enjoy a well-rounded view of the connections between society and geology. I will reformat unit 3-4 in the future to make time for this bit.

Overall, the students seemed to be engaged and interested most of the time during the module. They reported that their eyes were opened to regional hazards that they had never thought about before. They appreciated that geohazards do not have to be sensationalized to have a major impact on society. Many of them said their only experience with mass-wasting was through Hollywood films! Overall, this was a success and I'd use this module again.