Unit 3: Warm with a Chance of Melting

Students first learn how GRACE technology has increased our ability to make important discoveries about how mass changes on the Earth's surface. Next, student groups analyze and interpret different sets of GRACE data (snow melt, ice velocity, and ice elevation) to predict and provide evidence for future rates of ice melt in designated regions of Greenland. These predictions are compared across groups and examined for consistency, as well as compared to actual ice mass changes revealed through GRACE data.

Scale, Proportion and Quantity: Some systems can only be studied indirectly as they are too small, too large, too fast, or too slow to observe directly. HS-C3.2:

Global Climate Change: Through computer simulations and other studies, important discoveries are still being made about how the ocean, the atmosphere, and the biosphere interact and are modified in response to human activities. HS-ESS3.D2:

Hide
Online-adaptable:
Main exercise is a jigsaw activity that can be successfully done in an online course; but it does take a bit of extra effort to arrange the students into two different sets of online groups with online collaboration. This will probably be more success in a synchronous format.
OR the unit could be adapted away from the jigsaw format with Parts 2 and 3 below combined into a single exercise done individually or in static small groups.
Used this activity? Share your experiences and modifications 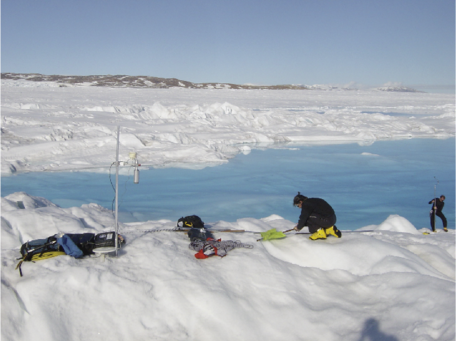 Provenance: Leigh Stearns (University of Kansas)
Reuse: This item is offered under a Creative Commons Attribution-NonCommercial-ShareAlike license http://creativecommons.org/licenses/by-nc-sa/3.0/ You may reuse this item for non-commercial purposes as long as you provide attribution and offer any derivative works under a similar license.

The content in Unit 3 is appropriate for introductory geology, oceanography, meteorology, and other geoscience courses; sophomore-level courses in which geodesy and/or climate studies are being introduced; or non-geoscience courses where climate studies and/or the nature and methods of science are being investigated. Unit 3 activities can easily be adapted to serve small- or large-enrollment classes and can be executed in lecture and lab settings as a series of interactive lecture activities, a lengthier in-class activity, a collaborative lab exercise, or as part of a ~two-week investigation of the use of geodesy to understand cryosphere and sea level changes using the entire Ice Mass and Sea Level Change module. In the Ice Mass and Sea Level Change module, this unit follows Unit 2: Temperature--a global trendsetter on air temperature and sea level projections and precedes Unit 4: An uplifting story of sea level change on the contributions of short-term, post-glacial rebound and melting to sea level change. If the entire two-week module will not be utilized, we recommend pairing Unit 3 with Unit 4: An uplifting story of sea level change to give students an opportunity to consider the role of local uplift on sea level and gain experience reading and interpreting bedrock GPS time-series. Alternatively, Unit 3 could be paired with Unit 5: Regional sea level changes—a tale of two cities to consider potential societal impacts of sea level change.

The group work portion of Unit 3 is a jigsaw activity.


At the beginning of the class meeting, each student receives handout A, B, or C. In groups of three to four, students with the same handout work together and answer a variety of questions about their data set. For efficiency and consistency, four study sites have been chosen for Unit 2: Petermann Glacier, Jakobshavn Isbrae, Helheim Glacier, and an interior study site in northeast Greenland. These study sites are circled on every map given to students. 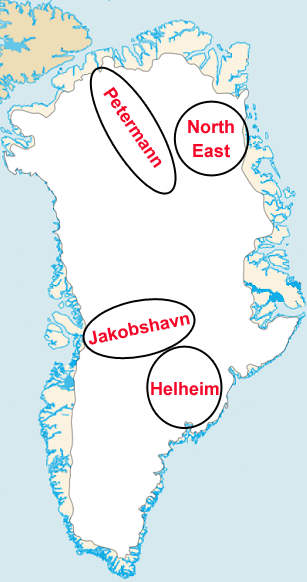 Provenance: Leigh Stearns, University of Kansas Main Campus
Reuse: This item is offered under a Creative Commons Attribution-NonCommercial-ShareAlike license http://creativecommons.org/licenses/by-nc-sa/3.0/ You may reuse this item for non-commercial purposes as long as you provide attribution and offer any derivative works under a similar license.

Students divide into new teams—team size depends on enrollment, but there should be at least one group A, B, and C representative. (Teams of three are ideal for discussion, but teams of up to six students will work.) Via a series of discussion questions in the handout, each student provides a brief explanation of his/her data set and presents his/her ice mass change prediction and evidence maps. Each team compiles the results of their predictions from snowmelt, air temperature, ice velocity, and ice elevation data in a table and creates a team prediction map. At this point, the instructor may choose to have a group report-out, with selected teams sharing their predictions and rationale.

Unit 3 concludes with a large group discussion about the following topics: 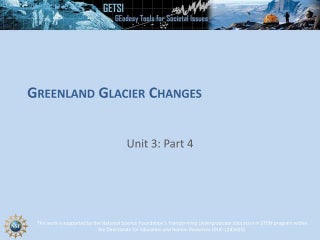 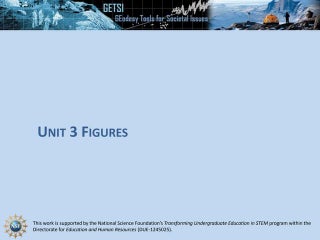 Depending on the elements of Unit 3 that are implemented in class, the duration of discussion and brainstorming about the mechanisms contributing to ice mass changes in Greenland, time spent on the GRACE data, and the teaching techniques employed (for example, some instructors might choose to implement the entire unit as a group work exercise, while others might rely more heavily on whole-group discussion/lecture), Unit 3 could occupy two to four hours of class time. The class meeting before implementation, each student should be given a copy of the preparation exercise. Prior to classroom implementation, copies of the group activity worksheet used in Part 2 should be copied for each student. Each student needs at least two colored pencils (preferably, every student will have the same colors for consistency on their maps). A copy of the compiled activity worksheet used in Part 3 should be available for each ABC group. Color copies of the following should be printed for Parts 2 and 3—quantity-wise, there should be a complete set of color copies for each ABC group that will convene in Part 3:

PowerPoint presentations should be downloaded. We also recommend providing reference maps with the four study areas circled for each group.

Here are some notes about implementing Unit 3. For additional teaching tips and descriptions of classroom implementation strategies, refer to the Instructor Stories page.

Example #1: Faculty may collect student predictive and evidence maps at the end of the class meeting, either one set from each student or one combined set of maps from each group after snowmelt, ice elevation, and ice velocity representatives have pooled their data.

Example #2: Depending on the classroom setup and time constraints, faculty may choose to have group report-outs after the snowmelt, ice elevation, and ice velocity representatives have pooled their data. The faculty member could moderate the report-outs by projecting a slide of the prediction and evidence maps, asking selected groups for their predictions and rationale, populating the maps as the groups respond, and asking for alternative predictions and rationale from other groups. Alternatively, individual groups could be called to the front of the classroom to populate the maps (perhaps one group for each of the four study sites.) 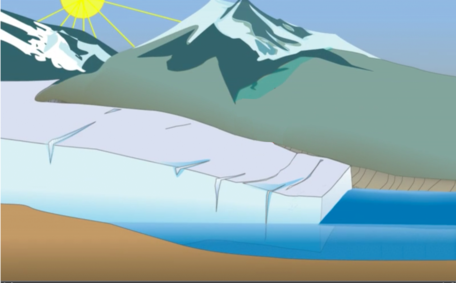 ×
Glacier schematic that students can use to guide their concept sketch.

Provenance: Leigh Stearns, University of Kansas Main Campus
Reuse: This item is offered under a Creative Commons Attribution-NonCommercial-ShareAlike license http://creativecommons.org/licenses/by-nc-sa/3.0/ You may reuse this item for non-commercial purposes as long as you provide attribution and offer any derivative works under a similar license.
Level-3 example: (SERC has additional information on concept sketches as an assessment strategy.)

(Alternatively, a simple schematic of a glacier could be provided so that all students are starting with the same template.)

Scoring: Concept sketches may be assessed using a rubric. Here is an example assuming that this is a 10-point question: 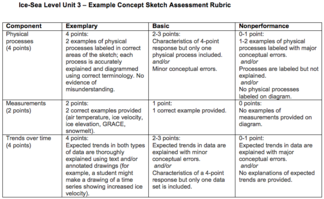 Provenance: Becca Walker & Leigh Stearns
Reuse: This item is offered under a Creative Commons Attribution-NonCommercial-ShareAlike license http://creativecommons.org/licenses/by-nc-sa/3.0/ You may reuse this item for non-commercial purposes as long as you provide attribution and offer any derivative works under a similar license.
Example Unit 3 Concept Sketch Rubric (Microsoft Word 2007 (.docx) 85kB Oct1 15)