Students analyze tide gauge data to demonstrate that changes to sea level have various causes, such as ice mass loss and bedrock uplift; regional variations among these factors results in unequal regional changes to sea level. In addition, students identify potential economic, infrastructure, and residential impacts of sea level rise on Southern California and New York City, and communicate their opinions on the viability of adaptations.

Obtaining, Evaluating, and Communicating Information: Integrate qualitative and/or quantitative scientific and/or technical information in written text with that contained in media and visual displays to clarify claims and findings. MS-P8.2:

Defining and Delimiting Engineering Problems: Humanity faces major global challenges today, such as the need for supplies of clean water and food or for energy sources that minimize pollution, which can be addressed through engineering. These global challenges also may have manifestations in local communities HS-ETS1.A2:

Is sea level change globally uniform? How do sea level changes have the potential to influence major metropolitan areas during the next century? How should these changes be addressed, and who should be responsible for taking action? In this unit, the conclusion to the Ice Mass and Sea Level Change module, students explore the potential impacts of sea level change on the economy, infrastructure, and residents of Southern California and New York City. Students also consider how changes in these two regions will have a widespread influence on other US cities, even for landlocked communities.

Hide
Online-adaptable: This sea level impact analysis is designed to be done in small groups and possibly with a class g
allery walk. These would need to be converted to small online groups and online discussion. The Part 4 wall walk could potentially be adapted to class discussion that uses polling feature to see people's opinions. Arguments could be made verbally or with the chat box.
Used this activity? Share your experiences and modifications 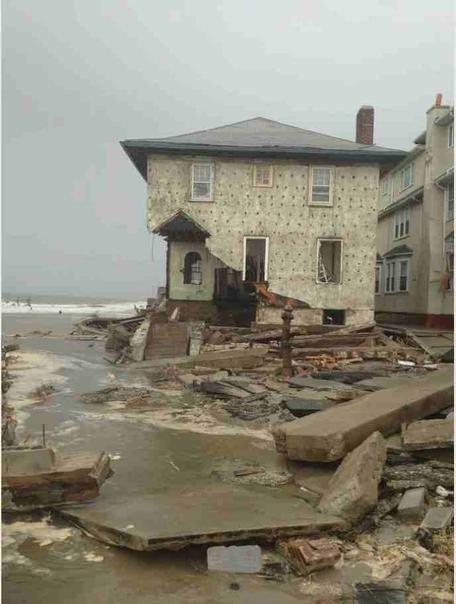 Provenance: by Proud Novice and available from https://commons.wikimedia.org/wiki/File:Damage_from_Hurricane_Sandy_to_house_in_Brooklyn,_NY.jpeg#/media/File:Damage_from_Hurricane_Sandy_to_house_in_Brooklyn,_NY.jpeg)
Reuse: This item is offered under a Creative Commons Attribution-NonCommercial-ShareAlike license http://creativecommons.org/licenses/by-nc-sa/3.0/ You may reuse this item for non-commercial purposes as long as you provide attribution and offer any derivative works under a similar license.

The content in Unit 5 is appropriate for introductory geology, oceanography, meteorology, and other geoscience courses; sophomore-level courses in which geodesy and/or climate studies are being introduced; or non-geoscience courses where climate studies and/or the nature and methods of science are being investigated. Unit 5 activities can easily be adapted to serve small or large-enrollment classes and can be executed in lecture and lab settings as a series of interactive lecture activities, a lengthier in-class activity, or as part of a ~two-week investigation of the use of geodesy to understand cryosphere and sea level changes using the entire Ice Mass and Sea Level Change module. In the Ice Mass and Sea Level Change module, this unit follows Unit 4: An uplifting story of sea level change on the contributions of short-term, post-glacial rebound and melting to sea level change. If the entire two-week module will not be utilized, we recommend pairing Unit 5 with Unit 1: Rising concerns over rising sea levels and Unit 2: Temperature--a global trendsetter to give students an opportunity to make calculations about global sea level changes and think about impacts of sea level change on a developing country before they consider the potential impacts of sea level change on an industrialized nation. 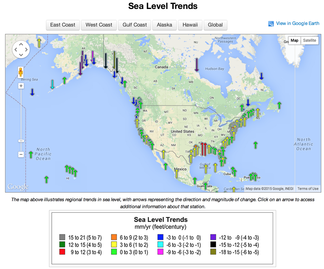 Provenance: Leigh Stearns, University of Kansas Main Campus
Reuse: This item is offered under a Creative Commons Attribution-NonCommercial-ShareAlike license http://creativecommons.org/licenses/by-nc-sa/3.0/ You may reuse this item for non-commercial purposes as long as you provide attribution and offer any derivative works under a similar license.
In Unit 4, students learned that in the case of East Greenland, isostatic uplift rates are currently greater than sea level rise in the region. It is imperative that students understand that sea level change is not globally uniform with respect to the type of sea level change (rise or drop) or the magnitude of sea level change. To that end, students begin Unit 5 by completing a brief, written exercise using the NOAA Sea Level Trends viewer. As Internet access is useful, this could be done as a preparation exercise before coming to class. Alternatively, instructors could print hard copies of the map or project an image of the map and complete the exercise during class time. If this option is exercised, students will not be able to quantify the sea level changes for individual stations unless they have Internet access in the classroom.

Students are provided with information on the potential impacts of sea level rise on roads and railways; ports; coastal land area and associated infrastructure; and power plants and waste disposal facilities in New York City and Southern California, as well as several examples of strategies that are already being taken by other communities within and outside of the United States to adapt to sea level rise. A series of questions are posed about New York City and Southern California's potential responses to sea level rise, and students respond to the questions based on evidence from their reading. Depending on time constraints and desired format of the activity, instructors may choose to assign different students with different stakeholder roles before they consider and respond to the questions. Potential stakeholder roles (modified from Introduction to Stakeholder Participation, NOAA Coastal Services Center) are described below.

There are several ways to implement Unit 5, including think-pair-share; discussions in small, stationary groups; and work in small or mobile groups in the context of a gallery walk. Alternatively, instructors could forgo the discussion questions, provide students with the readings for Southern California and New York City, and go directly to the gallery walk.

Once students have completed the Unit 5 discussion, we suggest a whole-group wall walk for purposes of a concluding discussion and formative assessment. A wall walk is an interactive format for discussions of controversial topics. In a wall walk, four signs are placed in different parts of the classroom—strongly agree, agree, disagree, strongly disagree. A statement about response to sea level change is projected for everyone to read, and each student moves to the sign that best expresses his/her opinion about the topic. Selected students at each sign are asked to provide a justification for their opinion on the topic, and students have the opportunity to move fluidly between signs if they change their minds during the discussion. Suggested statements for the wall walk are listed below and provided in the Word document.

Depending on the components of Unit 5 that are implemented in class and the teaching techniques employed, Unit 5 will require 1–2 hours of class time. Prior to classroom implementation, copies of the tide exercise and copies of the New York City, Southern California, and adaptation vignettes should be made for each student. Alternatively, instructors could assign these readings as a preparation exercise to decrease the in-class time required for Unit 5. Discussion questions and wall walk questions should also be available for classroom implementation. PowerPoint presentations should be downloaded. For additional teaching tips and descriptions of classroom implementation strategies, refer to the Instructor Stories page.

Example #1: If instructors choose to implement Part 2 as a gallery walk, there are several informal and formal methods that may be used to assess gallery walks available on the SERC website. Ultimately, students should be able to identify commonalities between sea level rise-related problems in New York City and Southern California, suggest potential adaptation strategies, and discuss the positive and negative consequences of implementing the adaptation strategies.

Example #2: The wall walk can be assessed by verbal report-outs and/or having students record their opinions and evidence to support their opinions.

Level-2 example #2:
List and briefly describe two causes of land loss related to sea level change. Propose one strategy for adapting to the loss of coastal land and discuss the positive and negative aspects of this strategy.

Scoring: scoring rubric below assuming that this is an 8-point question. 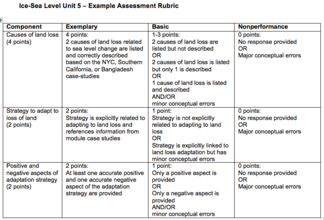 Provenance: Becca Walker & Leigh Stearns
Reuse: This item is offered under a Creative Commons Attribution-NonCommercial-ShareAlike license http://creativecommons.org/licenses/by-nc-sa/3.0/ You may reuse this item for non-commercial purposes as long as you provide attribution and offer any derivative works under a similar license.
Unit 5: Assessment Rubric (Microsoft Word 2007 (.docx) 87kB Nov13 15)