Geodesy is the science of accurately measuring the Earth's size, shape, orientation, mass distribution and how these vary with time.

Hide
Gravity is determined by mass. Earth’s mass is not distributed equally, and it also changes over time. This visualization of a gravity model (the geoid) was created with data from NASA’s Gravity Recovery and Climate Experiment (GRACE) and shows variations in Earth’s gravity field. Red shows areas where gravity is relatively strong, and blue reveals areas where gravity is weaker.

Provenance: Created by: NASA/JPL/Center for Space Research, University of Texas at Austin Downloaded from: https://eos.org/features/einstein-says-its-309-7-meter-oclock?utm_source=eos&utm_medium=email&utm_campaign=EosBuzz102519
Reuse: This item is in the public domain and maybe reused freely without restriction. 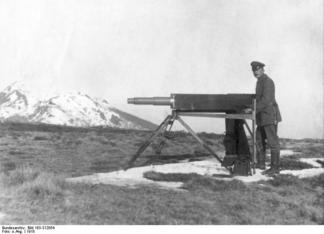 Provenance: This image was provided to Wikimedia Commons by the German Federal Archive (Deutsches Bundesarchiv) as part of a cooperation project. The German Federal Archive guarantees an authentic representation only using the originals (negative and/or positive), resp. the digitalization of the originals as provided by the Digital Image Archive. https://commons.wikimedia.org/wiki/File:Bundesarchiv_Bild_183-S12054,_Vermessungstruppe_bei_Fernaufnahmen.jpg
Reuse: This item is offered under a Creative Commons Attribution-NonCommercial-ShareAlike license http://creativecommons.org/licenses/by-nc-sa/3.0/ You may reuse this item for non-commercial purposes as long as you provide attribution and offer any derivative works under a similar license.
Over the last century, geodesy has developed from fairly simple surveying technologies, which helped to accurately determine positions on Earth, to a complex toolbox of methods now available to scientific researchers and students. In recent decades, geodetic applications have rapidly expanded from measuring plate motions and monitoring earthquake hazards to include research on volcanic, landslide, and weather hazards; climate change; and water resources. Learn more from this video on 9 Impacts of Geodesy.
Jump down to: GPS | Lidar | InSAR | GRACE | Altimetry | SfM | Meters 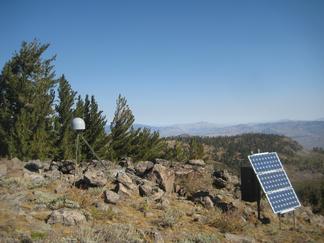 Provenance: UNAVCO - http://www.unavco.org/instrumentation/networks/status/pbo/photos/P149
Reuse: This item is offered under a Creative Commons Attribution-NonCommercial-ShareAlike license http://creativecommons.org/licenses/by-nc-sa/3.0/ You may reuse this item for non-commercial purposes as long as you provide attribution and offer any derivative works under a similar license. 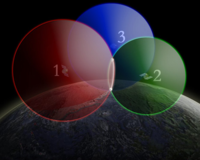 ×
Three GPS satellites are used for positioning and a fourth provides a time correction. Together they allow calculation of precise positions.

Provenance: NOAA - http://oceanservice.noaa.gov/education/kits/geodesy/media/supp_geo09b3.html
Reuse: This item is in the public domain and maybe reused freely without restriction.
GPS is a USA-based fleet of more than 30 satellites that are orbiting our planet approximately 11,000 miles above Earth's surface. GNSS includes the USA's GPS and similar satellites from other countries. A position can be calculated using three satellites, plus a fourth to correct for clock imprecision. You may already be familiar with handheld GPS units, which people have in their phones, tablets, cameras, cars, and more. Whereas handheld GPS can be accurate to a few meters or tens-of-meters, the high-precision "differential" GPS units that Earth scientists use in their research can measure motions as slow as one millimeter per year. The first major applications of high-precision GPS were to monitor plate tectonic motions and assess earthquake and volcanic hazards. More recently, scientists have been able to apply the technique to landslide hazards, ground water monitoring, tide gauging, ice/snow monitoring, and soil and atmospheric moisture. Learn more about GPS from UNAVCO's Educational Resources or Wikipedia. Some good resources on GPS water cycle products and "reflection GPS" can be found at GPS Spotlight. 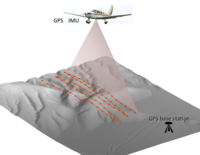 ×
With airborne LiDAR a scanner is mounted on an airplane and combined with data from GPS and an IMU (inertial measurement unit) to yield high-resolution topographic data.

Provenance: Ed Nissen (Colorado School of Mines)
Reuse: This item is offered under a Creative Commons Attribution-NonCommercial-ShareAlike license http://creativecommons.org/licenses/by-nc-sa/3.0/ You may reuse this item for non-commercial purposes as long as you provide attribution and offer any derivative works under a similar license.
Lidar is a remote sensing technology that measures distance by sending out laser pulses and calculating the reflection return time. Lidar scanners can be mounted on aircraft, ground-based tripods, or mobile devices (airborne lidar, terrestrial laser scanning [TLS], and mobile lidar, respectively). Depending on the way a survey is set up, the resulting topographic model can have a resolution of meters to centimeters. The laser beams also have the ability to penetrate and return through holes in a vegetation canopy, thus yielding a "bare earth" topography from the latest returning signals that is not possible using other methods. Differences between first and last returns in vegetated areas can yield canopy volume and density. Repeated scans of the same area allow for detailed measurement of topographic change. Lidar can be used for a broad range of hazard assessment applications, stratigraphic analyses, understanding geomorphic and tectonic processes, and vegetation studies. Learn more about lidar from OpenTopography, Wikipedia, Washington Dept. of Natural Resources or National Ecological Observatory Network. 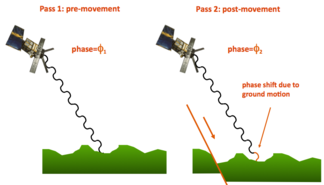 ×
InSAR uses the phase change between successive images to measure land level changes. This example shows the method applied to measuring change caused by an earthquake.

Provenance: Gareth Funning (University of California Riverside)
Reuse: This item is offered under a Creative Commons Attribution-NonCommercial-ShareAlike license http://creativecommons.org/licenses/by-nc-sa/3.0/ You may reuse this item for non-commercial purposes as long as you provide attribution and offer any derivative works under a similar license. 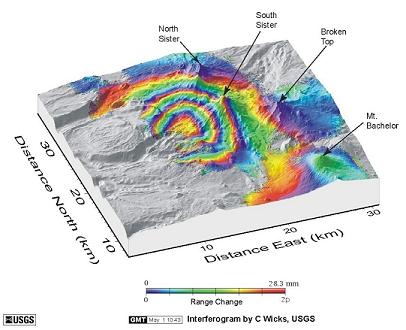 Provenance: Interferogram prepared by C. Wicks of USGS - http://volcanoes.usgs.gov/activity/methods/insar/
Reuse: This item is offered under a Creative Commons Attribution-NonCommercial-ShareAlike license http://creativecommons.org/licenses/by-nc-sa/3.0/ You may reuse this item for non-commercial purposes as long as you provide attribution and offer any derivative works under a similar license.
InSAR measures ground deformation using two of more synthetic aperture radar (SAR) images. Most commonly, the images are from Earth-orbiting radar satellites but the method can be used from aircraft or ground-based sensors too. The radar signal phase changes between repeat images allows for centimeter-scale measurement of deformation over spans of days to years and over large regions. Although complications can arise from ground-surface moisture and changing atmospheric conditions, radar is able penetrate clouds and provide data over large areas, thus making it a good complement to other methods such as GPS, lidar, and SfM which have more limited spatial extents. InSAR has applications for monitoring of natural hazards (ex. earthquakes, volcanoes and landslides), measuring land subsidence, and even surface water level assessments and glacial ice velocity. Learn more about InSAR from Physics Today article by M. Pritchard, UNAVCO InSAR infographic and poster, the USGS InSAR Fact Sheet, or Wikipedia. 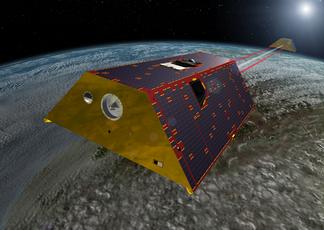 ×
Artists rendition of GRACE-FO satellites. Like the original GRACE, the twin GRACE-FO satellites follow each other in orbit around the Earth, separated by about 137 miles (220 km). The exact distance is affected by the changing gravity field below and is continually measured by laser ranging between the satellites.

Provenance: NASA https://gracefo.jpl.nasa.gov/mission/overview/
Reuse: This item is in the public domain and maybe reused freely without restriction. 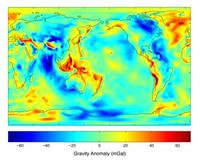 Provenance: Kate Shervais, Colorado State University
Reuse: This item is offered under a Creative Commons Attribution-NonCommercial-ShareAlike license http://creativecommons.org/licenses/by-nc-sa/3.0/ You may reuse this item for non-commercial purposes as long as you provide attribution and offer any derivative works under a similar license.
Measuring Earth's gravity field, is also an element of geodesy. The advent of satellite-based gravity measurements has profoundly affected our ability to determine the changing mass distribution on Earth. GRACE (Gravity Recovery And Climate Experiment) has led to unprecedented observations. The gravity field of the Earth is uneven, reflecting the mass distribution on our planet. The orbit of the twin satellites of GRACE is disturbed by the uneven gravity field, changing the distance between the satellites. This distance change is measured using a microwave ranging system. This technique is used in tandem with GPS, as each of the satellites is equipped with a highly precise GPS receiver. This measure of the gravity of Earth can be used for many applications, but changes in groundwater and ice mass have been two of the most profound. They have aided researchers in understanding climate change impacts and groundwater changes over time. GRACE data can be used to track the distribution of water over Earth's surface on continents, ice sheet volume, sea level change, ocean currents, and the dynamics of the inner structure of Earth. Learn more about GRACE from the official GRACE website, GRACE Follow-on website, brochure on GRACE in layman's terms, or NASA mission pages.

Satellite altimetry measures the distance between a satellite and a target on Earth. Usually, this is done with a radar altimetry system, which sends a radar pulse to Earth's surface and then measures the time the pulse takes to reach the surface and return to estimate the distance. Particular characteristics of the signal, like the magnitude and shape of the waveform, give information on the type of surface surveyed. Other altimetry systems exist, like ATLAS (Advanced Topographic Laser Altimeter System), a laser altimetry system on ICESat-2 (scheduled spring 2017).

These methods are used to survey both sea level and ice altitude. These satellite missions last for years, so collect data ideal for climate change studies as the ice and sea levels can be measured over time. This data can be compared to data collected from GRACE, to give a complete picture of how ice volume and sea level are changing. For more information, see the Aviso+ page on the basics of altimetry and the ICESat-2 page for information on ice satellite altimetry. Some examples of the results of satellite altimetry are at JPL, NOAA, and CU Sea Level Research Group. 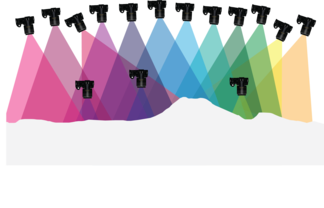 ×
A cartoon of the SfM technique, based on taking photographs from a wide array of orientations and distances. The location of the camera for each photograph is calculated using features recognized in multiple photographs.

Provenance: Kate Shervais, Colorado State University
Reuse: This item is offered under a Creative Commons Attribution-NonCommercial-ShareAlike license http://creativecommons.org/licenses/by-nc-sa/3.0/ You may reuse this item for non-commercial purposes as long as you provide attribution and offer any derivative works under a similar license.

×
An example SfM model from the Pofadder shear zone. The blue rectangles indicate the calculated camera locations; the model is a 3D point cloud with a photo overlay. Jamie Kirkpatrick.

Provenance: Kate Shervais, Colorado State University
Reuse: This item is offered under a Creative Commons Attribution-NonCommercial-ShareAlike license http://creativecommons.org/licenses/by-nc-sa/3.0/ You may reuse this item for non-commercial purposes as long as you provide attribution and offer any derivative works under a similar license.
Structure from Motion or SfM is a photogrammetric method for creating three-dimensional models of a feature or topography from overlapping two-dimensional photographs taken from many locations and orientations to reconstruct the photographed scene. The applications of SfM are wide-ranging, from many sub-fields of geoscience (geomorphology, tectonics, structural geology, geodesy, mining) to archaeology, architecture, and agriculture. In addition to ortho-rectified imagery, SfM produces a dense point cloud data set that is similar in many ways to that produced by airborne or terrestrial lidar. The advantages of SfM are its relative cost in comparison to lidar, as well as its ease of use. The only required equipment is a camera. A computer and software are needed for data processing. Additionally, an aerial platform like a balloon or drone can also be useful for topographic mapping applications. Because SfM relies on optical imagery, it is not able to generate the "bare earth" topographic products that are typical derivatives of lidar-based technologies – thus, SfM is usually best suited to areas of limited vegetation. Learn more about Structure-from-Motion from GETSI Introduction to SfM.

Three types of meters can supplement the data collected using the geodetic techniques detailed above: borehole strainmeters, tiltmeters, and creepmeters.

Tiltmeters are very sensitive inclinometers that measure the change from horizontal. These may be installed in boreholes with borehole strainmeters. A tiltmeter may also be installed on the ground surface. Tiltmeters are generally used for fault monitoring, volcano monitoring, dam monitoring, assessing potential landslides, and the orientation and volume of hydraulic fractures. For more, see the UNAVCO Tiltmeter page or the USGS instruments page.