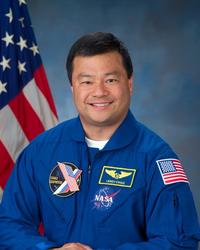 The Photographic Society of America defines travel photos as images that "express the feeling of a time and place, and portray a land, its people, or a culture in its natural state." Travel photos have "no geographical limitations." You might say then, that astronaut Dr. Leroy Chiao is the ultimate travel photographer. From October 13, 2004 to April 24, 2005, Dr. Chiao lived aboard the International Space Station (ISS), circling the globe once every 92 minutes. During his six months as Commander of Expedition 10 on the ISS, he captured an astonishing 24,000 photographs of our home planet.

Perhaps even more impressive than the sheer number of photos Dr. Chiao took are the conditions under which he took them. When taking pictures from a moving space station, timing is everything. Propped up on one hand, with one foot strategically wedged between a hand rail and the wall to keep him from floating away in the low-gravity environment of the space station, Dr. Chiao would carefully position the telephoto lens of his 6 MP digital camera over one of three small windows in the floor of the ISS's Russian Service Module. As his target came into view, he'd have just a split second to snap a photo. According to Chiao, "Since the Earth is moving past at 17,500 mph, one must pan the camera as the shutter is released, otherwise the image will smear and appear out of focus."

Hand-held astronaut photography is a valuable complement to aerial photography and satellite imagery. Astronauts are better able to capture dynamic, unpredictable events of geological, oceanographic, environmental, and meteorological significance. Communication with ground personnel helps space station crew members identify the best opportunities for photographing target sites back on Earth. Astronauts have taken nearly 1,000,000 images of the Earth, dating back to the Mercury missions in the early 1960s.

Today, the ISS continues the tradition. At an altitude of 220 - 286 miles (354 - 460 km) above the Earth, and an orbital inclination of 51.6°, the ISS is in a prime position to observe most populated areas of the world. Among Leroy Chiao's favorite eyes in the sky views of Earth, are his photographs of the Great Wall of China (the first confirmed picture of the wall from space), Lake Nasser in Egypt, and a full moon above Earth's horizon and airglow.

Dr. Chiao is now retired from NASA, but took his love of photography with him, and credits it for changing the way he looks at the world. "Photography in space helped bring out the artistic side in me. The beauty of the Earth was very inspiring, and I tried to find new ways to capture and express that beauty." Dr. Chiao is now an entrepreneur, consultant, and speaker. He is an Executive VP and Director of Excalibur Almaz, a company that plans to fly private citizens to low earth orbit and beyond in the next few years. Perhaps such endeavors into commercial spaceflight will open the door for a new generation of amateur space photographers.