Explore More if You Have Time
Resources
Movies on this Page

Use Fire Data to Review My World Basics

In this first section of Week 8, you'll review some of the basic GIS skills you have learned, including turning layers on and off, zooming and panning within them, and working with the data tables linked to the map.

Launch My World and Open the Aspen Fire Project

Explore the Data Layers of the Aspen Fire project 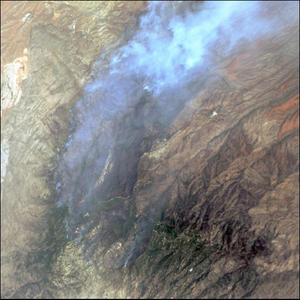 The Aspen Fire started on Tuesday, June 17, 2003, in the Catalina Mountains north of Tucson, Arizona, about two miles from the mountain community of Summerhaven. The fire spread rapidly, fueled by high temperatures and dry conditions and fanned at times by extremely high winds gusting at 40 to 60 miles per hour.

When the summer monsoon rains finally arrived on July 15, the fire was extinguished. By that time the fire had burned 84,750 acres and destroyed 335 structures. Three and a half million gallons of water were used to fight the fire, 400,000 gallons of fire retardant were dropped, and over 1000 fire fighters battled the blaze. The cost of suppressing the fire was estimated at 17 million dollars.

Show me the maps

These remotely sensed images of the Aspen fire were acquired on June 24, 2003 by the MODIS Airborne Simulator instrument carried by a NASA ER-2 high altitude aircraft. (The ER-2 is a research version of the military U-2 spy plane.) MODIS is capable of imaging in 36 different wavelength bands, including several bands in the infrared (IR).

The bottom image is a true color image, approximating what you would see if you looked down on the fire from the plane. The top one is a false color image with Shortwave IR assigned to the red channel, Near IR assigned to green, and Green assigned to the blue channel. Notice how the addition of the infrared wavelengths makes the extent of the burned area easier to detect. The red color does not represent the heat of the fire. Rather, it's the high reflectance in the shortwave IR from the now barren trees and ground. The fire itself appears as bright orange-red strips around the perimeter of the burn area. Note also how well the infrared wavelengths penetrate the smoke, giving a much clearer picture of conditions on the ground.

Remotely sensed images and GIS data were instrumental in monitoring both the fire and its aftermath. In general, images like these are helping natural resource personnel to better understand and manage fires.

Show me a movie about exploring map layers MyWorld

Investigate Tables of Layers in the Aspen Fire Project

Open and investigate several of the Table of Layers for data layers in the project. As you investigate these layers and their data, think of questions that you might be interested in exploring further, such as: "How did the fire spread?" or "Where was the greatest damage?"

Each record in the Table of Layer "Daily Fire Perimeter" describes a specific polygon on Earth's surface that was burned by the fire over a one day period and corresponds to a feature on the map. In this case, these polygons show the progress of the fire each day. They contain important information for fire management planning. They show direction and rate of the fire's spread. They are drawn frequently throughout the day by the fire management team. Fires generally slow their progress during the night, giving the fire crews time to recoup and use these maps to plan a strategy of attack for the next day. These maps are also posted in places where they are publicly available, so that everyone involved has the opportunity to be informed.

Show me how to make selection from rows

What range of temperatures are in the TEMP field?

Hide
The fire temperature ranges from 305.2 to 500.1 degrees Celsius. You can also see this in the Legend at the bottom of the map window.

Explore More If You Have Time

Movies on this Page

Exploring Map Layers in My World

Exploring the Daily Fire Perimeter Layer in My World

Exploring Map Layers in My World

Exploring the Daily Fire Perimeter Layer in My World

Exploring the Fire Severity and Fire Temperature Layers in My World