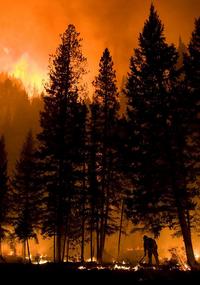 Fire fighter on ground during Yellowstone Fire of 1988.
The fires in Yellowstone National Park are now raging into their second month, and consuming millions of acres of timber. Fire mangers are realizing that conventional methods of monitoring and reporting from the ground or low-level aircraft are insufficient. They are simply not able to see the progress of these gigantic fires or anticipate their movements as effectively as is needed if they are ever going to bring these tremendous fires under control.

In a groundbreaking moment in fire management strategy, Chief Naturalist George Robinson decides to call NASA to inquire if they could possibly provide high altitude photographs of the region. As a result of this urgent call, NASA not only programmed the Landsat-4 Earth Resource Satellite to fly over and photograph the area, they also made arrangements for two additional types of aerial surveillance utilizing C-130B and ER-2 aircraft. 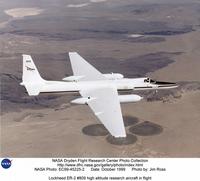 ER-2 Plane in flight.
The C-130B aircraft, affectionately known as the "Herc", is a medium-altitude aircraft and a workhorse of the military. It flies at approximately 25,000 feet, and has a cockpit large enough for scientists to travel along with the crew in order to interpret data as it is being recorded. The ER-2 is an adapted high-altitude spy plane that can fly at 65,000–70,000 feet. Both the C-130B and ER-2 are equipped with remote infrared sensors that can see through smoke and haze to map the temperature of the burning land surface below. The ER-2 plane was able to provide detailed data in near real time via a satellite relay. This was the first time that an ER-2 plane had ever been used for this type of work and it proved to be a great success. It was a historic effort. Together the three NASA surveillance missions greatly aided fire commanders during their strategy sessions. Sensors aboard these aircraft provided information about the location, size, rate of spread and fire intensity, that allowed fire commanders to both battle the blazes and to protect the firefighters on the ground from this aggressive and unpredictable fire.

Today, thanks to an increase in the number of Earth-observing satellites and advances in computing technology, information about forest fires is far more detailed and able to be transmitted rapidly from satellite to manager. Satellite and aircraft surveillance have become an essential part of fire management. A major break through in the use of satellites for monitoring fires came with the 1999 launch of the MODIS instrument on board the Terra satellite. MODIS's one kilometer resolution enabled the detection of larger, more intense fires that are typically responsible for the majority of biomass damage. These high-intensity fires, like the Yellowstone fire of 1988, are so hot they can burn all the way to the soil, leaving it sterilized and making recovery very slow. As of 2003, satellites like Aqua, Terra, and Earth Observing-1 are able to work collaboratively and autonomously to track wildfires and other hazardous events with even greater accuracy and immediacy than ever before. To learn more about the research and development of remote sensing and fire management, visit the Resource links below.