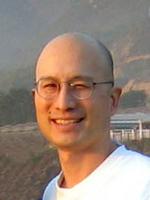 Dr. Steve Chien, NASA scientist.
Would you have ever thought of using enhanced spy planes and artificial intelligence to observe forest fires? Leave it to NASA scientists like Dr. Steve Chien of NASA's Jet Propulsion Laboratory, to come up with innovative approaches to everyday problems. Dr. Chien leads efforts in automated planning and scheduling for space exploration as Technical Group Supervisor of the Artificial Intelligence Group and Principal Computer Scientist in the Mission Planning and Execution Section at JPL. His work with artificial intelligence aboard Earth observing satellites has made amazing breakthroughs in the way ground-based hazards are detected and analyzed.

Satellites such as Aqua and Terra orbit the Earth daily, continuously searching for hazardous events such as fires, floods, and volcanic eruptions. Thanks to software designed by Dr. Chien and others at JPL, these satellites are now capable of automatically communicating with one another! Dr. Chien's software enables Earth orbiting satellites to work together as a virtual web of sensors with the ability to monitor the planet far better than any individual satellite. Through cooperation and communication, linked satellites detect potential hazardous events and redirect another satellite to simultaneously focus in on a specific region or incident for a higher-resolution examination—all without the direct human intervention. 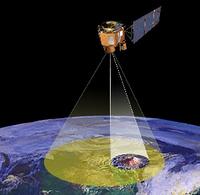 NASA EOS Satellite
In 2005, Dr. Chien was one of several NASA scientists who wrote software that specifies what types of conditions satellites should look for as an indication of a hazardous event. On their daily orbits of Earth, Aqua and Terra's moderate resolution sensors are constantly searching for fires and other hazards, and deciding which events need further investigation. When an event that demands more data is detected, the system automatically instructs the Earth Observing-1 satellite to take a pass over the area and take a high-resolution follow-up image. The MODIS Rapid Response System at Goddard Space Flight Center immediately processes this second image. If the processing detects a hot spot caused by a fire, the image is sent on to human scientists to confirm the interpretation, and a notification is sent to forest officials. All of this takes place within 24-48 hours of initial detection, a tremendous advantage over the 14-day lag time between detection and follow-up for preplanned observations.

Giving forest officials immediate information allows them to make critical management decisions such as whether or not to suppress a fire or to let it burn naturally, while also protecting human lives and structures. For his innovative work with satellite artificial intelligence, Dr. Chien won the software of the year award at NASA in 2005. His Autonomous Sciencecraft Experiment (ASE) aboard NASA's Earth Observing-1 satellite has acquired nearly 30,000 images to date.