Data in GIS is displayed in either raster or vector layers.

You have spent the first four weeks of this course studying raster images. You have accessed, downloaded, controlled, and analyzed raster images using ImageJ and Giovanni. Another important class of data which we will introduce in the upcoming weeks is vector data. Vector data can be represented by the same elements students learn in geometry. These are points, lines, and polygons. These data are different from raster data in that they are infinitely scaleable. This means they remain smooth at all zoom levels, without the pixelation you see when you zoom in on raster images.

You have already seen that the pixels in raster images are visual representations of numerical information such as elevation, temperature, reflectance, population density, ozone concentration, etc. Image processing tools allow you to visualize, manipulate, and analyze this information in a variety of ways. For example, you may be able to use reflectance data at different wavelengths to infer the type of land cover across a region. If a comparison of your predictions to the actual ground cover shows a good correlation (a process called ground truthing), your technique can be applied to new regions with some certainty. 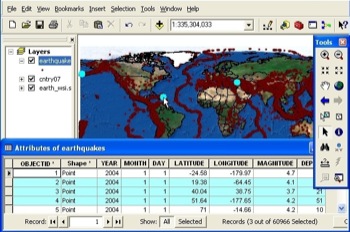 In this map view, each point representing an earthquake is tied to an entry in the attribute table. Any quake attribute can be used to set the color, size, or type of symbol used.

Vector data defines features by their geometry, representing each feature as a point, line, or polygon. Information about a group of related features with the same type of geometry is collected in a database, which includes not only the geometric description of the feature, but any other information you want to keep track of. In a GIS, such a group of related features is represented visually by a layer or theme (as in a thematic map.) The database linked to each layer is called its attribute table. 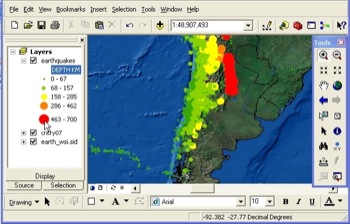 The points display quake depth (km) and magnitude using symbols of different colors and sizes. This example illustrates an ocean plate subducting under continental crust. The further under the continent, the deeper the earthquakes occur.

The power of a GIS comes from the fact that it gives you the tools to display and analyze both raster and vector datasets in a visually rich and computationally powerful environment. You can can add layers, turn layers on and off, control the symbolization of each layer, and illuminate what might otherwise be obscure relationships between datasets. GIS software includes powerful database analysis tools that you can use to investigate the underlying datasets.