Getting to Know Querying in GIS 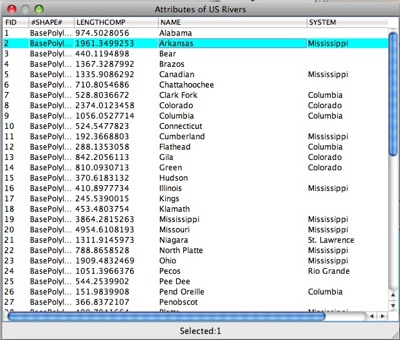 In the Intro to AEJEE and Intro to ArcGIS sections, you learned that a GIS is not just a display tool. You investigated the geographic data connected to the map. Features displayed in a GIS have two key components: 1) information describing their spatial location such as bounding latitudes and longitudes and 2) attribute data describing their non-spatial qualities.

The non-spatial data in a GIS are presented in tables that make up a database linked to the map. The geographic features in the table are presented in horizontal rows, where each row represents a single record. The attributes of the features in the table are listed in vertical columns, with field names at the top. For example, in the Attribute Table of US Rivers shown to the right, individual rivers are the geographic features that are listed in horizontal rows. The attributes of rivers include their length, name, and system and are listed in the vertical columns. In the image, the second record displaying the attributes of the Arkansas River is selected.

The power of geographic analysis is the ability to ask and answer questions about geographic features and their attributes and the relationship between them. This is what is known as a Query or selection. A query chooses a subset of records from the database. Queries may be simple, only searching for one feature, or more complex, selecting a group of features. Basic query operations may be combined to select complex sets of information.

Database queries — use set algebra and Boolean algebra. Set algebra uses the comparison operations less than, greater than, equal to and not equal to. An example of set algebra is, "Show all the records that are greater than or equal to X". Boolean algebra uses the words And, Or, Like and Not. Both of these types of queries focus on the features and attributes that are in the dataset. These selection criteria may be applied individually or in combination.

Spatial queries — use spatial logic. For example, "Show all the X within a relationship to space Y". It is more like Venn diagram logic. These queries focus more on the physical relationships between datasets such as finding all the rivers that are within a given state or all the states that are adjacent to a river.