Eyes on Dr. Jeff Morisette ⎯ Using Satellites to Predict the Next Invasion of Tamarix 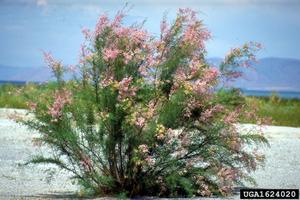 A delicate ornamental, prized for its pink blossoms and needle like leaves, Tamarix is a small shrub-form tree that was imported to the United States from Central Asia and the Mediterranean in the mid -1800's. It was valued not only for its beauty but also for its ability to stabilize stream banks and to provide shade in the hot climate of the Southwestern United States.

However, unbeknownst to its admirers, within this plant's delicate beauty hid an aggressive, invasive pest. The Tamarix quickly escaped cultivation and opportunistically grabbed a hold of fertile riparian zones in the desert southwest. Its rampant invasion continues today, over 100 years later. In the United States it is estimated that the damage due to Tamarix and its removal costs taxpayers millions of dollars. The seeds of Tamarix are spread by wind and wildlife. These seeds, which are viable for up to six weeks, can take advantage of areas that have been disturbed by grazing, flooding or fire. The plant can also spread by its roots or even pieces of its roots. Tamarix is a highly successful invader because it is able to tap into the water table as much as 100 feet below the surface. It has been known to use up to 200 gallons of water per plant per day!

Once established, the plant is extremely difficult to either control or eradicate. In order to remove it, teams of volunteers known as "tammywhackers" must use special jacks to dig up and dispose of its roots, one tree at a time. This is a hot, sweaty and seemingly endless task. Since efforts to eradicate existing Tamarix stands seem nearly impossible, land managers and scientists changed their tactics to include the prevention of establishment of new stands of Tamarix. 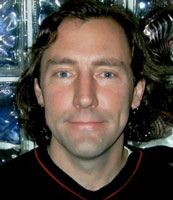 Armed with the knowledge of Tamarix's preferred habitat and growth requirements they turned to Jeff Morisette, a remote sensing scientist at NASA, and Tom Stohlgren an ecologist at the United States Geological Survey (USGS). Together their interagency team combined vegetation data from remote sensing Satellites (MODIS) with other ecological data sets in GIS to successfully predict Tamarix's next advance. The habitat suitability maps that were produced in this effort now help to identify where Tamarix is likely to grow. By sharing these maps with fire ecologists like Kara Painter of the National Park Service, ground based monitoring teams are able to monitor and model the movement of Tamarix and eliminate it before it becomes established and invasive. For his work, Jeff was awarded the 2006 NOAA David John Award for Outstanding Innovative use of Earth Observation Satellite Data.

It is beneficial to catch Tamarix before it has a chance to alter ecosystems and even the soil that it is growing in. This prevention tactic saves not only food and habitat for native birds and insects it also saves enormous amounts of valuable water.

Read more about this NASA partnership at Ecological Forecasting: A Strategic Partnership to Predict and Manage Biological Invasions