Investigate the Tamarix Invasion in the United States

Create a Spatial Query to Investigate the Extent of the Invasion 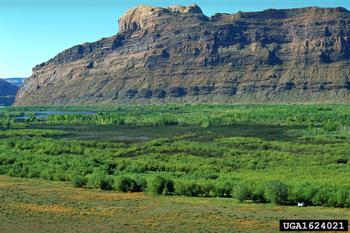 Tamarix, or saltcedar, grows as a woody shrub or small tree. It was introduced to the United States in the 1850's as an ornamental plant capable of erosion control. It successfully adapted and quickly spread into wetlands displacing native trees such as cottonwood, willow and mesquite. Now, Tamarix has invaded nearly all the watercourses and wetlands in the Southwest US. As one of the most successful and common invasive species in the United States, it has overtaken nearly one million acres of habitat. Since it can transpire as much as 300 gallons of water per day, it is capable of causing a wetland to completely dry up. Additionally, Tamarix has a tendency to increase the salinity of the soils in which it grows and it is of little or no value to wildlife. Although Tamarix is difficult to eradicate, in locations where it has been eliminated native vegetation and wildlife have returned and flourished.

Launch AEJEE and Orient the Map for the Investigation

Investigate the Tamarix Invasion in the United States

Where is the present Tamarix invasion and how far has it spread across the United States?

Where is the Tamarix invasion the most severe?

Tamarix can be found throughout the Southwest United States. Some states have more of a Tamarix problem than others, but because Tamarix spreads easily and is very difficult to eradicate, plant biologists are keeping a close eye on the situation.

Zoom and Pan around the map to get a better idea of the extent of the invasion and to answer the following questions.

Create a Spatial Query to Investigate the Extent of the Invasion

Buffer Southwest states to investigate the extent of the invasion

Make US States the Active layer and select Arizona with the Select Feature > Polygon selection tool.

tool to select the records from the Tamarix database that are contained within the boundaries of the state of Arizona. This is a type of spatial query that is called "containment". 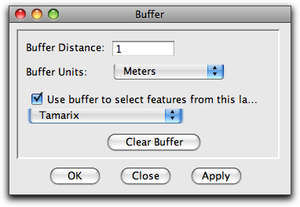 Discover the results of the selection

Repeat this entire process with several other Southwestern States to find the next most invaded state.

Show me the results

Clear the selections by clicking on the Clear All Selection

As you just discovered, Arizona's Tamarix invasion is the severe. Now, you'll investigate the specific Arizona rivers that have been invaded by Tamarix.

By using the satellite data of vegetation health the scientists at NASA and USGS are able to use habitat preferences, such as moist soils and low elevations, to begin to predict where Tamarix plants were most likely to appear in the future.

Adjust the layers on the map for the investigation.

Plants are sensitive to their environment and so they serve as a good indicator whenever there is change. Scientists routinely produce global NDVI maps to help them monitor and investigate shifts in plant growth patterns that occur in response to climate changes, environmental changes, and changes caused by humans. Farmers and resource managers also use NDVI maps to help them monitor the health of our forests and croplands. So these maps are useful both for scientific research as well as societal benefit.

Notice that the in Arizona the Tamarix invasion prefers the lower elevations where there is more desert. It is found in the river corridors and other low lying wet areas.

Add Elevation to the Map to Solve the Puzzle

So far we have observed that Tamarix invasion patterns follow the river corridors and also other areas that appear to have healthy green vegetation in the satellite NDVI image. So, why doesn't Tamarix invade everywhere? What is the missing element in the puzzle?