Part D: Climate Models: What does the Future Hold? 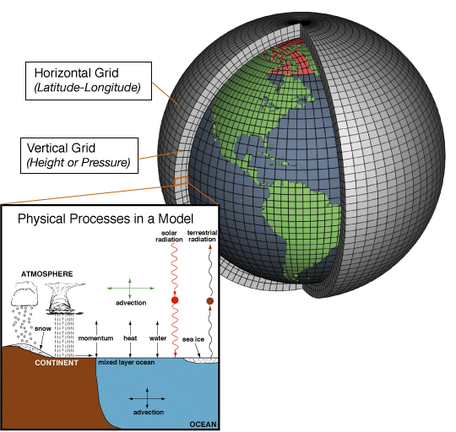 In the previous labs, you investigated the global and U.S. temperature records for the past 50 years. You learned about the likely causes of these changes in the global climate and the observed indicators of climate change. Additionally, you shared examples of extreme weather events. In this lab, you will now look forward in time and learn about climate models and view the projected changes in climate for the upcoming century.

What are climate models, and how do they work?

Climate models are constructed using basic physical equations describing how the climate system works in three dimensions, as pictured in the graphic, right. State-of-the-art climate models now include equations that describe the processes of all of the Earth systems. These equations describe the ocean, the atmosphere, the land, hydrologic and cryospheric processes, terrestrial and oceanic carbon cycles, and atmospheric chemistry. Unlike weather forecasting, which describes the daily sequence of environmental conditions starting from a present state and working forward in time, climate models are based purely on the physics and chemistry of the Earth system.

To complete a climate model, the physical equations, which represent how the spheres interact, are coupled with scenarios (described below) of how Earth's human population, land use, and economy will evolve. Once a climate model is run, the model output data is compared with the observed data from the past. This process allows scientists to check the accuracy of the models.

Worldwide, various teams of scientists have modeled the next century of climate change and the subsequent impacts. While the models show that while rising global temperatures generally characterize the future world, human behavior will determine how dramatic the changes may be.

What is a scenario?

×
Diagram of Scenarios. Note they have common "roots" but branch in different directions depending on the storyline. Click image for larger view. Source: IPCC

A scenario is an image of a potential future that is based on historical knowledge and expectations of future change, as illustrated in the roots of the tree in the diagram on the right. The IPCC scenarios are based on a data-driven storyline (or narrative) of what events have occurred in the past and how the future may unfold.

There are four commonly used scenario families. They are labeled A1, A2, B1, and B2. The scenarios describe the relationships between the forces driving greenhouse gas and aerosol emissions and their potential future change during the 21st century for the globe.

Hide
Each storyline, and related scenario, represents a different projection of a set of influential factors including: demographic and social change, economic growth, technological innovation, and environmental developments, such as land-use change. These emission scenarios are used as input into climate models.
(Text adapted from: IPCC Special Report on Emissions Scenarios, 2007)

According to the Intergovernmental Panel on Climate Change (IPCC), the four storylines combine two sets of divergent tendencies: one set varying between strong economic values and strong environmental values, the other set between increasing globalization and increasing regionalization. The storylines are summarized as follows (Nakicenovic et al., 2000):

Try the climate change questionnaire and learn more about scenarios

So, what does this all mean to me, the individual?

Try the interactive questionnaire, below, to see how your own individual lifestyle choices play out in a scenario and subsequent climate. Repeat the questionnaire several times and compare your results.

Questionnaire courtesy of The King's Centre for Visualization in Science


After you have completed the seven screens in the questionnaire, left, you will see the scenario that is a result of your choices.

The last slide gives you the option to explore the map of "your world" based on the given scenario. In the map window, choose a city that you might live in. Then, change the year to a year in your future: 10, 20, or 30 years from now. What happens to the climate in your city, and the world, in the future?

Show me a sample map and links to other scenario maps

The following map is of the B2 scenario. 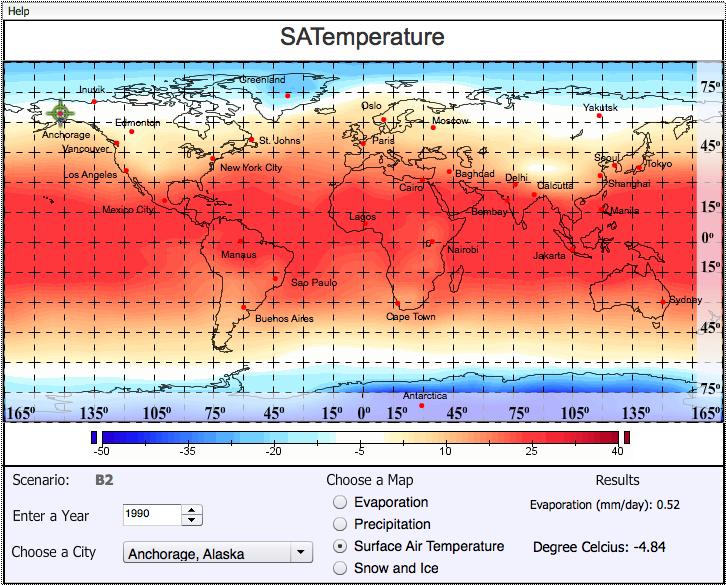 Provenance: Betsy Youngman, none
Reuse: This item is offered under a Creative Commons Attribution-NonCommercial-ShareAlike license http://creativecommons.org/licenses/by-nc-sa/3.0/ You may reuse this item for non-commercial purposes as long as you provide attribution and offer any derivative works under a similar license.
A1B scenario

Alternately, you may want to run the applet found here Visualizing Global Climate Change Scroll down to Climate Change Questionnaire and click the Run Applet link

How do individual lifestyle choices influence global climate change? Can one person really make a difference? Brainstorm and share ideas for changes in your lifestyle that you and your classmates (and families) can make.


What do the models predict for future temperature?

View the graphic below, from the IPCC Summary for Policy Makers. The three scenarios diagrammed in the graphic are identified as high- (A2, A1Fi) , medium- (A1B, B2) and low- (B1) growth. The left panel in the graph shows greenhouse gas (GHG) emission rates in CO2 equivalents per year. The graph on the right shows the global surface warming for the past 100 years as well as the predicted future, based on the emissions. Note that the range of emissions varies depending on the scenario, which you learned about in the beginning of this lesson. As you are viewing the graphic, answer the Checking In questions, located below the graphic.

Next, look at the maps of modeled global temperature change alongside of the temperature graphs. Click the image to enlarge it for a better view.

Now that you have some familiarity with climate models, including how models are developed and how they may vary, you will observe several climate models on the Climate Wizard interactive website.

To begin, go the the Climate Wizard website and choose "Compare and Animate Models" located in the map options box (or click this link). Start by observing the Global Climate Change. Use the slider next to the map to see the difference in temperature, or anomaly, from the 1961-1990 baseline, or average. While looking at the image, note the regions that warm more or less significantly. This model uses the Average Ensemble climate model with the A2 CO2 emissions scenario. An "ensemble" is the combination of a group of individual climate models. The advantage to an ensemble is that by combining a number of models, some of the bias and uncertainty is cancelled out. Think of it like an orchestra of violins versus a soloist.

Show me the map 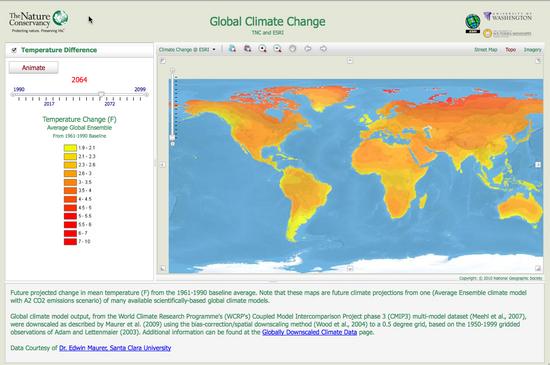 After viewing the map of average temperature change, click the links to take you to the Future Climate Models page.

Show me the page 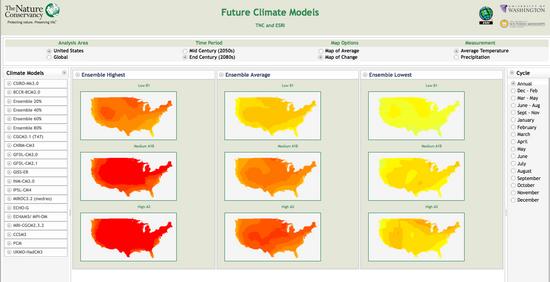 On this web page you can select models and view their output. Begin by selecting the three ensemble averages: Low, Average, and High. To select and view a model, drag it from the left column to the center of the page. Explore the various outputs including:

You can learn more about climate models, especially how they are constructed and used, by downloading and reading this PowerPoint presentation file What is Climate Modeling? (PowerPoint 2007 (.pptx) 6.3MB Jun20 11) from NOAA's presentation library.

Show me the presentation in PDF form

Climate Modeling 101 presents a detailed explanation of climate models and how they are similar to and different from weather models.

In more recent climate change reports, scenarios have been replaced by Representative Concentration Pathways (RCPs). Learn more about RCPs by reading this document Beginners Guide to RCPs (Acrobat (PDF) 2.7MB Sep17 15), and viewing the graphic comparing SRES and RCPs below. 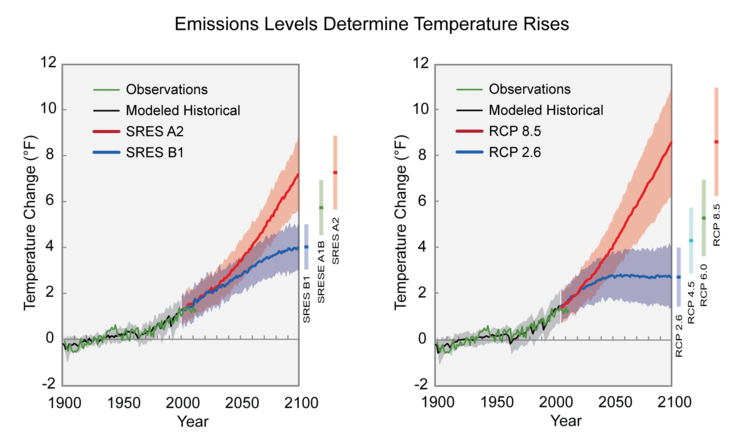 Show me how to compare SRES and RCP projections

Hide
Different amounts of heat-trapping gases released into the atmosphere by human activities produce different projected increases in Earth's temperature. In the figure, each line represents a central estimate of global average temperature rise (relative to the 1901-1960 average) for a specific emissions pathway. Shading indicates the range (5th to 95th percentile) of results from a suite of climate models. Projections in 2099 for additional emissions pathways are indicated by the bars to the right of each panel. In all cases, temperatures are expected to rise, although the difference between lower and higher emissions pathways is substantial. (Left) The panel shows the two main scenarios (SRES – Special Report on Emissions Scenarios) used in this report: A2 assumes continued increases in emissions throughout this century, and B1 assumes much slower increases in emissions beginning now and significant emissions reductions beginning around 2050, though not due explicitly to climate change policies. (Right) The panel shows newer analyses, which are results from the most recent generation of climate models (CMIP5) using the most recent emissions pathways (RCPs – Representative Concentration Pathways). Some of these new projections explicitly consider climate policies that would result in emissions reductions, which the SRES set did not. The newest set includes both lower and higher pathways than did the previous set. The lowest emissions pathway shown here, RCP 2.6, assumes immediate and rapid reductions in emissions and would result in about 2.5°F of warming in this century. The highest pathway, RCP 8.5, roughly similar to a continuation of the current path of global emissions increases, is projected to lead to more than 8°F warming by 2100, with a high-end possibility of more than 11°F. (Data from CMIP3, CMIP5, and NOAA NCDC) Source: NCA