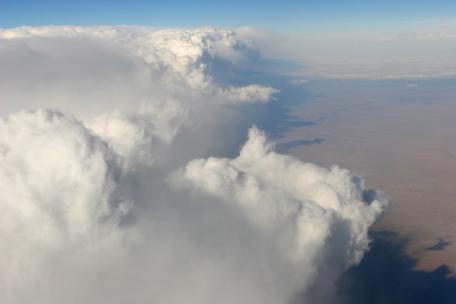 "NOAA and NASA analyses both indicate that 2016 was the hottest year on record globally. Combining the data sets from the two agencies indicates that the the average global temperature was 2.18°F (1.21°C) above a 1881-1910 baseline. Using this older period as a baseline gives a better indication of how much warming has taken place since the start of the industrial era." (Source: Climate Central, January 7, 2017).

Scientists and citizens both wonder: What is causing the wild weather—is it climate change, El Niño, or just an unusual year? It is too early to reach a conclusion, but the question is a hot topic everywhere. In this lab, you will look into the relationship between the recent weather patterns, climate variability, and the changes in Earth's heat content.

Begin by watching this short video from NOAA (1:54 minutes) and answer the Checking In questions below.

Both the daily weather and seasonal climate can change on multiple timescales. The variation from normal can last from minutes to years; we all can recall an unusually cold day, warm month, or rainy summer. Natural, cyclical variations occur within the climate system, the simplest of these is the seasonal variation that we experience every year. Additionally, even longer-term, large-scale patterns, called oscillations, exist in Earth's climate system. These oscillations take place over periods of time ranging from months to years—even decades. They can contribute to events of extreme weather such as droughts, floods, and storms. The most familiar of these patterns is probably the El Niño Southern Oscillation (ENSO). Others include the Arctic Oscillation (AO), the North Atlantic Oscillation (NAO), and the Pacific Decadal Oscillation (PDO). All of these patterns oscillate, or swing, between positive and negative states and influence regional and global climate. They contribute to what is known as climate variability or the variations in climate around the average (mean) state of the climate on long-term timescales—beyond that of individual weather events. To view these patterns of climate variability, go to the Global Climate Dashboard page and click on the climate variability tab.

Move the time slider, located below the graphs, to explore different time frames. Note how the patterns swing above and below the line in a fairly regular pattern.

Show me the graphs

Hide
Note that you can learn more about these patterns by clicking the Learn More text to the left of the graphs. 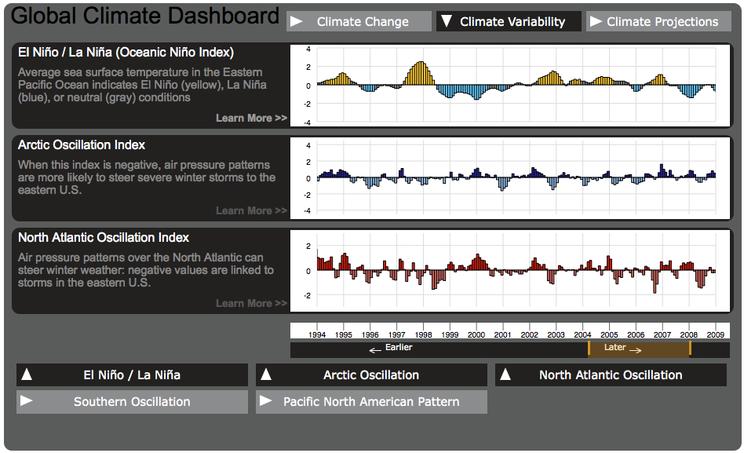 Since the year 2000, we have observed an increase in the frequency, scale (size), duration (length of time), and intensity of extreme weather events around the world. As you probably have seen in the news, these extreme events are devastating to societies in many parts of the globe. The physical impacts of these climate extremes range from local to national. They often impact one or more sectors of society including: agriculture, energy, transportation, water resources, or public health. They cause significant economic loss as well as fatalities.

Why are these events becoming more commonplace? According to the World Meteorological Organization (WMO), "While it is impossible to say that an individual weather or climate event was "caused" by climate change, one should anticipate that the magnitudes, frequency and duration of extreme events are likely to be altered as the Earth's atmosphere warms due to the increased concentrations of greenhouse gases." (Source: Weather Extremes in a Changing Climate: Hindsight on Foresight (Acrobat (PDF) 1.7MB Jul6 15), pg. 15, WMO 2011)

To learn more about how climate change may be fueling increased extreme weather events watch the video: A Home Run on Steroids, Baseball & Climate Change. (Note: the video begins as a blank screen.)

Courtesy of Climate Central and National Center for Atmospheric Research 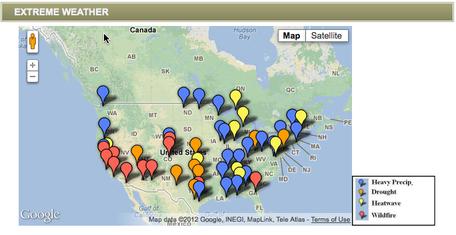 Once on the map, use the zoom and pan tools to move around the map. Click on the balloons to read more about the events that have taken place in the U.S. When you are done viewing the map, close the page.

What can be done to minimize the risks of damage due to extreme events? In mid-November, 2011, the IPCC (Intergovernmental Panel on Climate Change) issued a special report on managing the risks of extreme events. The report evaluates the role of climate change in altering the characteristics of the extreme weather events. Examples from the IPCC report are listed below.

Show IPCC predictions for the future of extreme events

Show me more information about 2016 temperature records and extreme weather