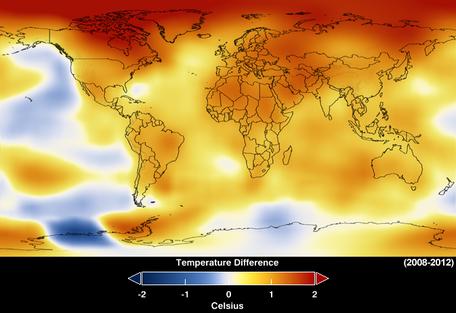 
In the previous lab you explored some of the indicators of climate change and you viewed graphs showing the rates of change in the selected indicators. In this lab, you will get a better sense of how rapidly the most recent century-scale changes in global temperature are taking place as compared to past millennial-scale changes. You will gain a better understanding of the interrelationship between global temperatures and atmospheric concentrations of the greenhouse gases, especially carbon dioxide. And, you will view satellite maps showing the spatial patterns of global warming over the past 150 years. Global temperature trends 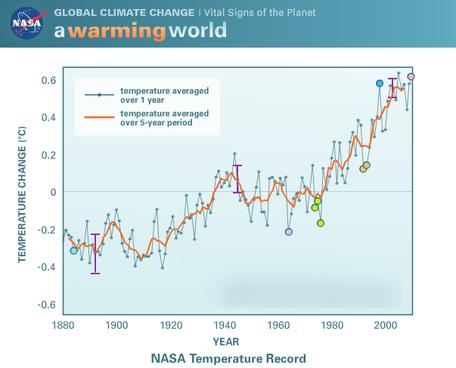 
You will recall from what you learned in Lab 5B that one of the key indicators of climate change is the steady upward trend in global temperature, depicted in the graph pictured to the left.

To begin your investigation, click on the image, left, to view a Flash interactive on a new page. On the interactive, rollover the blinking points to learn more about some events that have affected our planet's climate. Use information given in the graphic to answer the Checking In questions below. When you are done viewing the interactive, use the back button in your browser to return to this page.

EarthLabs
To view this interactive on an iPad, use this link to download/open the free TERC EarthLabs App.
Checking In
In the temperature graph, pictured above, focus on the temperature during the past 50 years, 1960 to present. During this time period, the trend shows significant warming. In the next section of the lab you will investigate a parallel trend, that of carbon dioxide. Trends in carbon dioxide concentrations 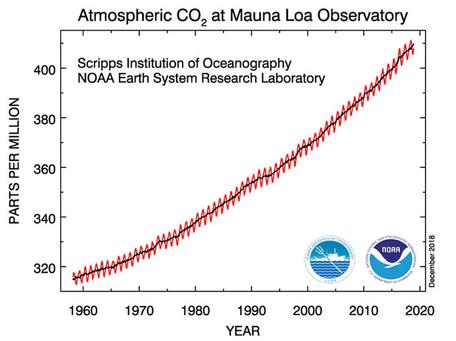 
Keeping the temperature graph (above) in mind, observe the graph of CO2 from Mauna Loa Observatory, shown below. The Mauna Loa graph is from 1960 to present, during which time scientists have carefully monitored and measured CO2 concentrations in the atmosphere. The red line in the graph is the monthly data and the black line is the trend for the year.

from Earth the Operator's Manual
How, when, and why did scientists begin to monitor CO2 in the atmosphere and what have we learned from these observations? Watch 'CO2 and the Atmosphere' to learn how scientists investigate and record changing levels of CO2 as well as other records of climate change. As you are watch this video, keep the following Stop and Think questions in mind.

Evidence of a changing climate on varying time scales

In the next section of this lab, you will explore how recent changes compare to long-term changes and you will look more closely at the relationship between CO2 and temperature.

Model the effect of CO2 concentration on global temperature

Ready to extend your knowledge and try your hand at modeling? Visit UCAR's Very Simple Climate Model page to view the interactive and set up some experiments. 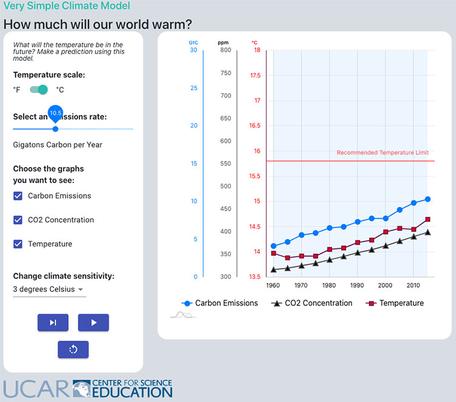 You are probably curious: What has been the trend in average temperatures in your own local area during the past 50 years?

To find out the answer to this question, access the National Climate Data Center (NCDC) U.S. Cities Analysis and choose from the list a city near your home location. The cities on this list that are highlighted in blue are part of the U.S. Historical Climate Network (USHCN). These cities have been selected because they are representative of their region's conditions, have a complete record of data, and have been corrected for any station changes or other potential errors in the data.

Are all areas of Earth warming at the same rate?

As you saw when comparing the graphs of the U.S. Historical Climate Network, the trend in temperature varies by region, due to many factors. In this section, you will gain an even larger vision of how surface temperature anomalies vary year to year across the globe. The video, produced by NASA, shows 135 years of global warming, as reconstructed from instrumental records, satellite data, and models.

Before viewing, use the legend, located at the bottom-right of the map, to gain an understanding of what the map is showing you. Areas that are colored blue are below the baseline temperature, for the period 1951-1980, while areas that are orange or red are above the baseline average.

Optional: For more information about the video, or for an alternate way to view the video (without YouTube), access this article: NASA article


Play the video several times, pausing it at years of your interest. Note how the temperature patterns move around from year to year. Describe patterns that you see in the data. Some years are colder than average and some warmer. However, as you can see, the overall change in warming accelerates during the most recent 50 years. After watching the video answer the Checking In questions below.

In the year 2012, was the temperature in northern Canada above or below average?

In the final part of Lab 5, you will extend your understanding of global temperature trends and climate change by learning more about computer models and projections for future temperature and precipitation patterns.