A Year in the Life of the Earth System

The lab activity described here was adapted by Erin Bardar and Sarah Hill of TERC for the EarthLabs project.

Students have been examining Earth as a system of interacting parts, initially from the local perspective but more recently from the regional and global perspectives. In order to fully understand Earth as a system and how its components interact with each other, students need to consider change over time. On relatively short times scales, these changes are related to the fact that the solar energy that drives the Earth system passes through an atmosphere that varies across space and time before reaching a spinning sphere. Across longer seasonal and annual time scales, these changes are more specifically related to the differential heating that results from the tilt of Earth's axis and Earth's orbit around the sun. At this longer-term global scale, it may be easier to see the repeating patterns of change across space and time and to infer how changes in one sphere may be linked to changes in others.

In Part A: Students use ImageJ, a free image processing tool, to make an animation of monthly data maps for one component of the Earth system in order to explore how the Earth changes over time at the global scale.

In Part B: Students make an animation of two datasets side by side to investigate relationships between different components of the Earth system across a 12-month period.

ImageJ is free public domain image processing software developed at the National Institutes of Health. Its power and flexibility allow it to be used as a research tool by scientists in many disciplines, from medicine to astronomy. Installers are available for Windows, MacOS and OSX, and Linux.

You can use ImageJ to display, annotate, edit, calibrate, measure, analyze, process, print, and save raster (row and column) image data (TIFF, GIF, JPEG, and many others). It reads most common raster image formats as well as raw data files in text format, such as from spreadsheets. ImageJ also supports stacks - multiple images in a single window - for animation and analysis.

Show me how to install ImageJ

Click the ImageJ Download page and it will open in a new window. Click the link that appears directly below the name of your computer's operating system (e.g. Mac, Linux, Windows). This action will transfer a compressed file of the software to your computer. Your browser should automatically expand the file, creating an ImageJ folder on your computer's hard drive. 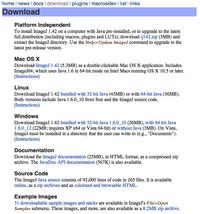 For more details, or if you have problems running the application, access ImageJ's Installation Instructions then select your operating system.

Double-click the ImageJ icon to launch the application and choose Help &gt; Update ImageJ.... A window will appear, telling you the version you are currently running and a list of upgrade versions. Choose the version you want to upgrade to (usually the most recent, or default version) and click OK. After the update downloads, re-launch ImageJ to run the new version. NOTE: Some users have reported problems updating ImageJ in certain versions of Windows. To fix this problem, you will need to manually update ImageJ.

Show me how to manually update ImageJ

The ImageJ toolbar contains both built-in and customized tools for manipulating images. Most of the tools are similar to those used in other graphics programs.

Provenance: From documentation of public domain software - ImageJ http://rsbweb.nih.gov/ij/docs/tools.html
Reuse: This item is in the public domain and maybe reused freely without restriction.

The animations that students observe in this Lab are powerful, but trying to take in a summary of constantly changing data for the whole planet across a full year is a challenge, and looking for relationships between two such massive data sets is even more challenging. To help students with these challenges, slow down the animations. Have them open the Animations Options window in ImageJ (Image &gt; Stacks &gt; Animation &gt; Animation Options...) and set the speed at no more than .4 or .5 fps (Frames per Second).

Something else that can help students notice change: when using the manual animation controls (the slider beneath the images) move back and forth between just two images at a time. Doing this helps one notice the changes between images, and allows one to focus on specific parts of the planet for a period of time.

Lab 6 activities have been correlated to the following National Science Education Standards ( This site may be offline. ) .

Energy in the earth system

12DESS1.3 Heating of earth's surface and atmosphere by the sun drives convection within the atmosphere and oceans, producing winds and ocean currents.

12DESS1.4 Global climate is determined by energy transfer from the sun at and near the earth's surface. This energy transfer is influenced by dynamic processes such as cloud cover and the earth's rotation, and static conditions such as the position of mountain ranges and oceans.

12DESS2.2 Movement of matter between reservoirs is driven by the earth's internal and external sources of energy. These movements are often accompanied by a change in the physical and chemical properties of the matter. Carbon, for example, occurs in carbonate rocks such as limestone, in the atmosphere as carbon dioxide gas, in water as dissolved carbon dioxide, and in all organisms as complex molecules that control the chemistry of life.

Use ImageJ to Create Additional Stacks and Animations

For this Lab, instructions have been provided for students to download a sequence of images from NEO (for example, 12 consecutive months of a specific variable). Simplified instructions for how to build an animation using any of the images available from the NEO Web site are provided here.

1. Download a sequence of images from NEO (for example, 12 consecutive months of a specific variable) and save them in a folder, giving each a file name that allows you to identify the image date or month name.

3. Select the menu item Image &gt; Stacks &gt; Images to Stack. ImageJ will "stack' the set of images so that only one is visible, and will prompt you to name and save the newly created stack.

If students are unable to download individual images from NEO, stacks of time-sequence images have also been prepared for the year 2017, so all they need to do is download them and open/animate them in ImageJ.


1. Open ImageJ and use File &gt; Open to open the pre-made image stacks.


Use ImageJ to Combine Animations

To compare two stacks by running them in the same animation:

3. Use the drop-down menus to select the order (left-right) in which you want the stacks to appear.

4. Name and save the combined stack, and use the menu items described above to start, stop, and modify the speed of the animation.

Complete documentation for ImageJ can be found at https://imagej.nih.gov/ij/docs/index.html. While the 189-page ImageJ Users Guide, available in both PDF and HTML formats, may seem overwhelming at first glance, it is a well-organized and very usable resource with a detailed Table of Contents and an extensive Index.