It's All Connected: Global Circulation 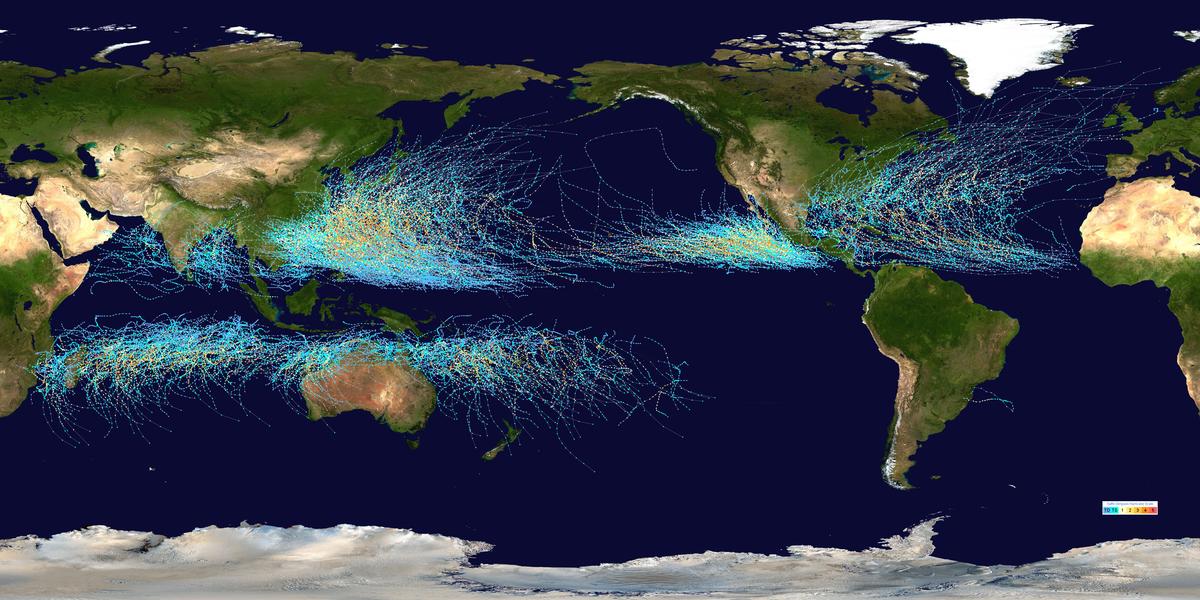 ×
Hurricane tracks are an indication of circulation patterns.

In Part B: Students study surface ocean currents and then predict the pathway of a floating object dropped into the ocean at a particular point, maybe one closest to their own region. Then, using a computer model of ocean currents, they test their predictions.

For more information about circulation of the atmosphere and the oceans , read the section titled Background Information under Additional Resources below.

In Part A: Students move back and forth between learning about global circulation patterns of air and water, and looking for connections between the local area and those global circulations. Part of this work involves tracing the path of a local stream until it joins the global ocean circulation. Resources that allow you to investigate the local-to-global connections are not provided in this Lab. You'll need to gather those resources and explore the possibilities. What pathways do your local streams follow as they wind their way toward the ocean? (Or might a local stream actually terminate at an endorheic body of water, which has no outflow, such as the Great Salt Lake?)

In Part B: The Ship Drift model is an engaging tool that makes the topic of ocean currents become very concrete and alive; it's interesting and fun to use.

Here are some notes about using the model:

Lab 4 activities have been correlated to Texas Essential Knowledge and Skills (TEKS) standards.

Lab 4 activities have been correlated to the following National Science Education Standards.

Interactions of energy and matter

12BPS6.1 Waves, including sound and seismic waves, waves on water, and light waves, have energy and can transfer energy when they interact with matter.

Energy in the earth system

12DESS1.3 Heating of earth's surface and atmosphere by the sun drives convection within the atmosphere and oceans, producing winds and ocean currents.

12DESS1.4 Global climate is determined by energy transfer from the sun at and near the earth's surface. This energy transfer is influenced by dynamic processes such as cloud cover and the earth's rotation, and static conditions such as the position of mountain ranges and oceans.

The global circulation of air drives some of the Earth's ocean currents and helps to redistribute the solar energy that reaches Earth, moderating climate and impacting environments for all life on Earth. Without that circulation and redistribution of solar energy, the equatorial regions would be hotter and the polar regions colder.

What drives this atmospheric circulation? It's not simply solar energy; it's solar energy interacting with the rotating sphere that is our planet. The differential heating that occurs when the sun heats a sphere (the earth) plays a significant role. Another factor is the Coriolis effect, which results from the fact that the rotational speed of our spherical planet varies with latitude.

Earth's solar energy is most concentrated in the region of the equator. This heating causes warm air to rise, which creates a general area of low pressure at the equator. As the rising air cools and starts to fall back toward Earth it spreads into both the northern and southern hemispheres (see figure) and returns to the surface of Earth at approximately 30 degrees north and south of the equator. That cooled air is then drawn back towards the low-pressure area at the equator and repeats the circulation. This circulation creates what are known as the Hadley Cells. (See figure.) 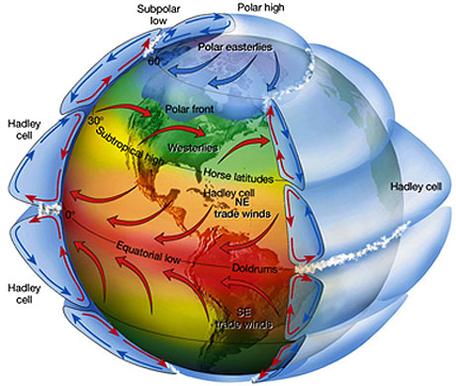 ×
This image gives a three dimensional view of the global wind circulation patterns dues to unequal heating at the equator and the poles.

Provenance: Image from NASA's Remote Sensing Tutorial: The Water Planet - Meteorological, Oceanographic and Hydrologic Applications of Remote Sensing. https://www.fas.org/irp/imint/docs/rst/Sect14/Sect14_1c.html
Reuse: This item is in the public domain and maybe reused freely without restriction.

In between the Hadley and polar cells in each hemisphere is a third cell of air circulation.

What is the Coriolis Effect, and why does it occur? First think just about the solid Earth. As the Earth rotates, a point on the equator moves in a large circle, and travels more than 38,000 km during one full revolution, or in 24 hours. Its rotational speed is approximately 1600 km/hr. During that same 24 hours, a point close to one of the poles makes a much smaller circle in the course of one day, and travels just a tiny fraction of the distance, so it's rotational speed is significantly slower than a point on the equator. In fact, a point on Earth's equator rotates at a greater speed than any point north or south of the equator.

If Earth did not rotate, air flowing from a higher latitude toward the equator would move directly south or north (depending on the hemisphere). However, because of the rotation, air that flows toward the equator is moving from a latitude where its rotational speed is less to a latitude where the rotational speed is more. As a result, that air rotates more slowly than the land below it, so it "falls behind" and it is deflected toward the west (see figure below). This produces a wind at the equator that flows from east to west.

Likewise, air flowing away from the equator and towards a higher, more slowly rotating latitude will rotate more rapidly than the land below, and will deflect towards the east to produce a west-to-east wind.

While the bands of circulating air cells and the Coriolis effect drive the general atmospheric circulation patterns, that circulation is also influenced by local conditions and is much more complex than the simplified illustrations suggest.

This image below shows twenty years of cyclone paths in the Atlantic. Can you see evidence of the general atmospheric circulation patterns? 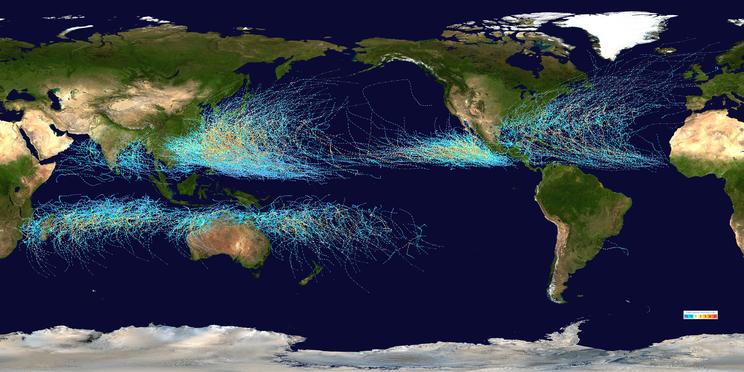 ×
Cyclone paths in the Atlantic. Click image to enlarge.

Read the National Oceanic and Atmospheric Administration's concise, well-illustrated resources that explain the driving forces behind ocean circulation. Some of these are related to the winds described above; others have a very different driving mechanism (a combination of temperature and salinity). The sections that address Surface Ocean Currents and The Global Conveyer Belt are just two of the topics covered in the Currents section of this education Web site.