Students are introduced to four major components of the Earth system: the atmosphere, hydrosphere, biosphere, and pedosphere. They start to apply this knowledge as they visit the local study site to identify elements of these four spheres and infer connections among them. The investigation concludes with students making predictions about ways that a change in the characteristics of one component of their study site might affect the characteristics of other components. 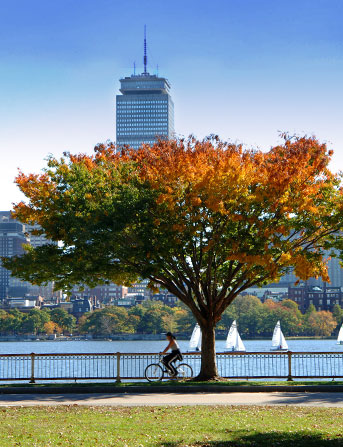 In Part A: Students are introduced to four major components of the Earth system and some of the ways in which they shape the planet and its environment.

In Part B: Students visit the study site where they take photographs to document the site, identify components and elements of the Earth system, and then describe some of the ways in which the elements and components of the Earth system are interconnected. Bring a digital camera for documenting the study site. Also consider bringing gloves and/or hand-washing supplies for students who may wish to get their hands dirty while exploring the local study site.

In Part C: Students strengthen their developing sense of the interconnectedness of elements and components of the Earth system by predicting how changes in one element or component would affect others (e.g., How would a change in water level affect plants and animals at the site?).

For more information about the Earth system, read the section titled Background Information under Additional Resources below

Review students' lists describing the interconnectedness between and among components of the Earth system. Have they explained their reasoning?

Lab 1 activities have been correlated to Texas Essential Knowledge and Skills (TEKS) standards.


(1) Scientific processes. The student conducts laboratory and field investigations for at least 40% of instructional time using safe, environmentally appropriate, and ethical practices.The student is expected to:

Lab 1 activities have been correlated to the following National Science Education Standards.

12ASI1.4 Formulate and revise scientific explanations and models using logic and evidence. Student inquiries should culminate in formulating an explanation or model. Models should be physical, conceptual, and mathematical. In the process of answering the questions, the students should engage in discussions and arguments that result in the revision of their explanations. These discussions should be based on scientific knowledge, the use of logic, and evidence from their investigation.

12DESS2.1 The earth is a system containing essentially a fixed amount of each stable chemical atom or element. Each element can exist in several different chemical reservoirs. Each element on earth moves among reservoirs in the solid earth, oceans, atmosphere, and organisms as part of geochemical cycles.

What is a system? A system is generally described as a set of components that interact within a boundary. A clock is a good example of a system. Mechanical and often electrical components work together to display the time. In recent years, scientists have started to consider Earth, from the very top of the atmosphere to the core at its center, as a system with four major components or spheres that interact in very complex ways. Those spheres include:

In this curriculum unit, the focus is on spheres that are most accessible to most students: the portion of the geosphere called the pedosphere; the hydrosphere; the biosphere; and the atmosphere.

NOTE: The terms we will use as we describe the earth system are as follows:

The pedosphere (soil) covers approximately 10%* of Earth's surface and deeply affects every other part of the ecosystem. Soil holds air, water, heat, and nutrients and is the medium in which we grow food and fiber. Soil supports billions of plants, animals, and microorganisms, it filters water, and it facilitates the decomposition of wastes. *Some scientists also consider the sediments that lie below Earth's bodies of water as part of the pedosphere, so there is some debate over the exact figure for soil coverage.

The hydrosphere covers about 75% of Earth's surface, and includes all bodies of water (oceans, lakes, rivers, streams, groundwater) liquid and frozen, fresh and salt. The oceans help regulate climate by absorbing large amounts of solar energy, particularly near the equator, and circulating heat towards the poles. Water constantly circulates between the hydrosphere, the pedosphere, the biosphere, and the atmosphere.

The biosphere is intimately connected with and dependent on the other spheres. Through processes such as photosynthesis, respiration, decay, and human activity such as burning forests or fossil fuels, the biosphere continuously exchanges gases with the atmosphere. Human activities can also cause changes in land and water use. To the extent that the biosphere modifies the other components of the Earth system, it can also modify Earth's climate.

The atmosphere distributes rain and traps some of the heat radiated by Earth to help keep us warm. It also protects us from harmful solar radiation, and plays a role in driving ocean currents that redistribute Earth's heat. Atmospheric aerosols from both natural causes (sea salt, pollen) and human activity change the composition of the atmosphere.

At the local level, there are many simple examples of the interconnections between components and elements of the Earth system. The roots of plants (biosphere) draw water and nutrients from the pedosphere, exchange oxygen and carbon dioxide with the atmosphere through the process of photosynthesis, and send water into the atmosphere through the process of transpiration. Plants also die and decompose to become part of the pedosphere. Water evaporates from rivers (hydrosphere) and the soil (pedosphere) to become part of the atmosphere. Oxygen in the atmosphere dissolves in a river (hydrosphere). Fish (biosphere) draw dissolved oxygen into their bodies from the hydrosphere.

There are also connections between elements within a component of the earth system. Birds eat plant seeds; flowers attract insects; rivers flow into lakes or oceans.

Because of the interconnectedness, changes in one sphere bring about changes in the others. Sometimes these changes are dramatic. Droughts (atmosphere) can cause severe changes in the hydrosphere, the biosphere, and the pedosphere. Frequently these changes are more subtle. Every rain changes the soil moisture and the amount of water in lakes and rivers. Increased water level in a lake has an impact on the plants and animals that inhabit the shoreline. An increase in air temperature decreases the amount of moisture in the pedosphere by increasing the rate of evaporation and the rate at which vegetation loses water (transpiration) to the atmosphere.

Much of this curriculum unit is drawn from the GLOBE program's "Earth as a System" unit. The 40-page Introduction to that unit provides extensive background information about the Earth system and can be downloaded using the link below.

To download the file, right-click (control-click on a Mac) the link and choose "Save File As" or "Save Link As."