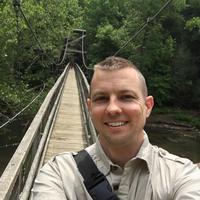 Kyle Hodder
The Twente Water Centre developed the freely available River Basin Simulation as a participatory teaching tool for post-secondary users. Over the past 6 years, I have run the simulation 16 times with 120 students in a senior undergraduate Hydrology course. This poster shares (a) quantitative and qualitative results from those simulations; (b) incremental modifications to the simulation that other educators can deploy; and (c) examples of the ways in which participants were consistently challenged to pair hydrologic science with decision-making.

Participants compete as users of water ('farmers') in the simulation, each of whom tries to optimize their benefits via irrigation. Each simulation spans one decade, and water availability is the limiting factor. All participants are well familiar with the hydrologic cycle, and also the Hydrologic Continuity Equation; the challenge lies in pairing hydrologic science with decision-making. The model uses only four variables (precipitation, river inflow, river outflow, groundwater) plus a fifth variable by which participants exert their decision-making efforts (irrigation). Participants are grouped into three unidirectionally-connected compartments within each basin: up-, mid- and down-stream.

Despite the relative simplicity of the five-variable model, participants struggled to avoid initial catastrophe. Results show the consistent tendency of participants to overexploit the available water resources very early in the simulation, resulting in extreme oscillations in water availability between years. The different exposure to risk is also illustrated as the consequences of upstream decisions propagate downstream. Successful modifications include: (a) incorporation of stochastic elements; (b) digital 'dashboard' for each basin to augment the otherwise paper-based system; and (c) second round of simulations in which participants apply lessons learned during the first simulation and catastrophe is avoided. Lessons learned include the demonstrated value of running coeval simulations side-by-side to illustrate the path-dependency of decisions, and also the inevitable need for basin-wide planning.
« View More Poster Sessions