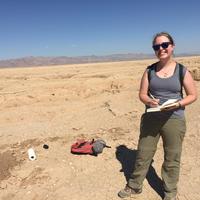 Rendezvous participants will have a chance to participate in Project Paleo by sorting their own invertebrate fossils using an identification sheet.

Paleontology is often termed a "gateway science" because of its ability capture children's attention and imaginations in a STEM field at a very young age. We can use the fun of fossils to begin teaching many core scientific concepts very early on in students' educational careers. Unfortunately, invertebrate paleontology is often neglected in the classroom due to a lack of understanding of the subject on the part of many teachers, as well as the limited access that teachers have to real fossils. The Natural History Museum of Los Angeles County's Project Paleo links real teachers with real fossils and real scientists. Project Paleo kits are available for teachers to borrow, and include guidelines for the activity, content background information sheets, lesson extension idea, laminated fossil identification sheets, tools for sorting, and a bag of unsorted invertebrate fossils. The students, with a target of late elementary through middle school, will work in groups to sort and identify the fossils as best they can and then place their final groupings into provided baggies with labels. The kit is then returned to the museum for final sorting and curating, and the museum's database will record the student's findings in perpetuity.

This activity was designed for students in the Los Angeles area, primarily Los Angeles United School District students and local home school students in the late elementary school and middle school age range. We have, however, successfully used the kits with both older (high school) and younger (pre-k to third grade) students with some modifications. In addition, Project Paleo need not be limited to Los Angeles- the fossils are local but the concepts are not.

This is an activity that allows students to put their hands on real fossils found in their city. In the process, they are assisting real museum scientists with their jobs and becoming "citizen curators." This personal involvement will lead to increased interest in STEM related fields. In addition, because paleontology is an interdisciplinary science, Project Paleo can be integrated into many subject areas, tailored by teachers to a specific grade and may include many different scientific concepts. Ecology, evolution, and basic pattern recognition are a few of the concepts that can be covered using Project Paleo.