Part 2: Explore and Investigate Digital Images to Develop an Understanding of Their Properties2

Zoom in and out

Show me the numbers

Show me an example of zooming in

Show me a movie of how to zoom in ImageJ

Hide
The squares you see are the dots or pixels (short for picture elements) that make up the image. An important concept is that — despite the impression given by those amazing FBI image processing techs you see in movies and television — you can't zoom in to an image indefinitely. When you reach the point where you can distinguish the individual pixels, you won't see additional details by zooming in more.

Scroll to move around

When you're zoomed in, how do you move around an image?

Show me a movie about how to scroll in ImageJ

By the numbers - pixel values and coordinates

A digital image — no matter where it comes from or how it is produced — is really just a string of numbers. Most of the time when you're working with digital images, the software keeps the numbers hidden from you. What makes ImageJ so useful is that you always have access to the numbers. Understanding this will help you and your students unlock the power of ImageJ.

Show me the image origin

Hide
The image origin (0,0) is in the upper left corner. 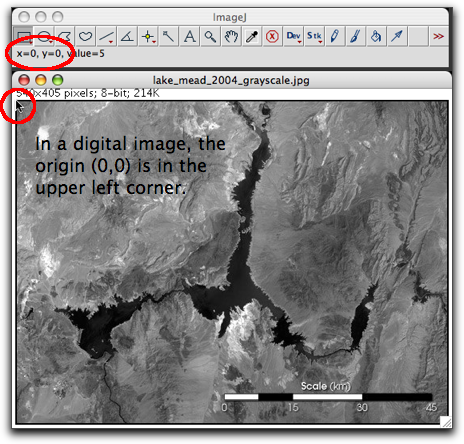 Show me what the value means

Hide
In this image, the value represents the brightness measured by the detector on the satellite at that particular location. In general, though, pixel values can represent anything that can be expressed as a number and organized in rows and columns.

Show me the words

Show me a movie about pixels, coordinates, and pixel values

An important concept here is that storing all this information in an image file on your computer is much more efficient than it seems. The computer doesn't need to store x- and y-coordinates — just the pixel values, in one long string, plus the width and height of the image. The coordinates are just information about the pixel under the cursor — its column and row number — that the software reports to the user.

So far, you know that a digital image is a string of numbers arranged in rows and columns. How does the computer know what each number should look like when it displays that pixel on your screen? It's pretty simple, really. In addition to a string of numbers, the computer has a "secret decoder ring" called a Lookup Table that it uses in paint-by-number fashion. In a very simple image with only four possible values, the lookup table might look like 0 = black, 1 = blue, 2 = red, 3 = white. In an 8-bit image, the 256 possible values correspond to 256 colors. (Okay, we know what you're thinking, but black, white and all those grays ARE colors!) The lookup table can be stored in the file with the data, or you can control it using the software that's displaying the data.

Show me the image with the fire lookup table applied 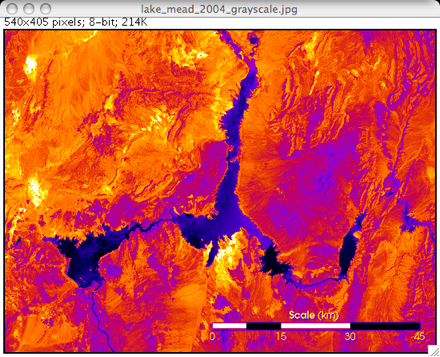 The key thing to remember about lookup tables is that they change the appearance of the image, not the pixel values themselves. The colors may change, but the numbers don't.
Now we can put it all together into a simple definition of a digital image:
A digital image is a series of numbers, arranged in a grid of rows and columns, and displayed according to a lookup table.

This image is an 8-bit image. Each pixel is represented in the computer's memory by an 8-bit binary number, representing 256 possible values from 0 to 254. Another term for the number of binary bits used to describe the value of a pixel is bit depth. You can think of the bit depth as the 3rd dimension of an image (width and height are the other two).

Hide
Yes, in this color image there are 3 values (numbers) for each pixel. These represent three separate color channels — Red, Green, and Blue (RGB). Think of the three numbers as a recipe. Each value represents the amount of its corresponding color. In other words, a pixel with color values of 192,125,75 has 192 parts of red light, 125 units of green light, and 76 units of blue light (out of a maximum 255 parts) - giving that pixel a brownish orange color.

RGB color images like this don't need lookup tables, because each pixel in the image has a recipe for how it should look. However, since each pixel now requires three 8-bit numbers rather than just one, this image requires three times the computer memory as the grayscale image.


When Values Represent Something Other Than Brightness

This image is a Digital Elevation Model (DEM) of the Lake Mead area. Instead of the brightness, each pixel value in the image represents the elevation at that location. The image has been calibrated so that the pixel values from 0 to 255 are converted to elevation (in meters). Mouse around the image and look at the pixel (elevation) values.

Show me where to look

Hide
The elevation of the lake is about 325 meters above sea level. The calibrated value is shown on the ImageJ status bar, followed by the original 8-bit value in parentheses. 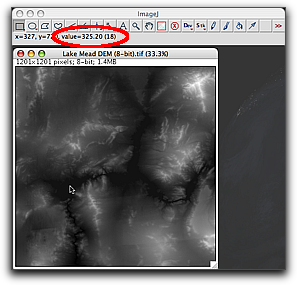 Hide
This is how it looks with the 32_Colors lookup table. 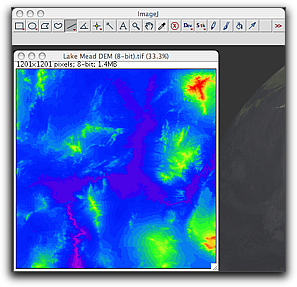 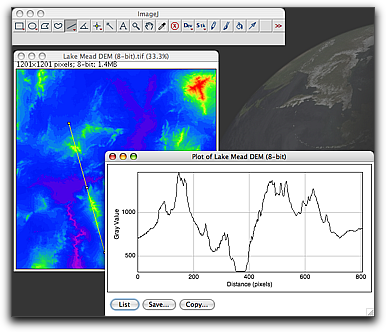 Your Assignment: Zoom in on a Remote Sensed Image and Take a Screenshot