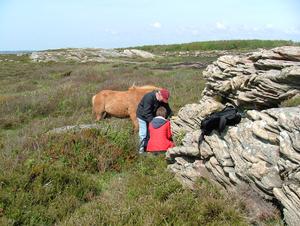 Hide
Hope student Sarah Dean, Professor Ed Hansen and a local Icelandic pony examine an outcrop of sillimanite-bearing gneiss
On three separate visits to Sweden between 2008 and 2011, groups of between two and three Hope College students mapped the geology in the area around the Stensjöstrand Naturreservat in Halland Province, Southwestern Sweden. Their map area is a high-grade, poly-metamorphic, poly-deformational, terrain in the Eastern Segment of the Sveconorwegian Orogen, which is broadly correlative with the Grenville Orogen of North America. This is part of a collaborative project involving scientists from both Lund University and the geological survey of Sweden (Sveriges Geologiska Undersökning or SGU). The geological mapping occurred over three to four week periods in May and early June. The project was funded with a number of small grants with the SGU providing support in the field.

Scientifically the major goals of the project were:

The ultimate goal of all of these studies is to constrain the tectonic models for the evolution of the Eastern Segment of the Sveconorwegian Orogen.

Educationally, the goal was to provide Hope College students with field mapping experience. This is particularly critical since Hope College policy does not allow us to require courses for graduation that we do not teach, and we do not have the resources to sustain a field camp. A second goal was to reinforce the students understanding of how research questions are formulated and answered with field observations. The final goal was to broaden the students' horizons by exposing them to an international research collaboration.

Show a map of the field area

Hide
The Field Area
This project was the result of a meeting between Ed Hansen and Dr. Leif Johansson during a field trip to Southwest Sweden in the spring of 2006, during which Dr. Johansson guided a group through the Stensjöstrand Naturreservat. At this time, they discussed the possibility of a collaborative research program that would involve Hope College undergraduate students. On a return trip to the area in the spring of 2007, they sketched out two possible projects. One project involved mapping the potential supracrustal belt in the Stensjöstrand region, while the other involved a study of "charnockitization" structures in orthogneisses several tens of kilometers to the south. They decided to investigate both projects during the first field season. Both projects involved working in a coastal resort area. In order to avoid crowds and higher prices they decided to do the field work in May before the start of the tourist season. 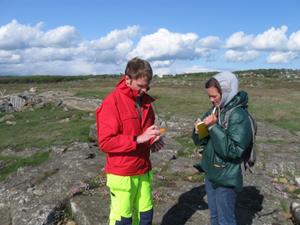 Hide
Hope College student Leah Labarge consulting with SGU geologist Linus Brander
Work during the first field season was funded by a faculty development grant from Hope College, supplemented by the Geological and Environmental Sciences department of Hope College, and small student research grants from the Geological Society of America. The field work took place between May 12 and June 2, 2008. A small tourist bungalow, rented at off-season prices, provided accommodations for the group, which consisted of three undergraduate research students and two supervisors. The first group consisted of three undergraduate research students and two professors. Sarah Dean worked with Dr. Aranzazu Pinan-Llamas on a detailed study of the fold geometry of coastal outcrops in the Stensjöstrand Naturreservat. Jesse Reimink mapped the lithologies in the Naturreservat under the supervision of Dr. Ed Hansen. Under the guidance of Ed Hansen, Tyler Depke collected digital imagery with the goal of using photogrammetry to create detailed outcrop-scale maps of charnockitization structures. Dr. Leif Johansson consulted with the group periodically on all aspects of the project. Towards the end of the field period the group selected sample localities for geochronological studies. In the United States, Sarah examined microstructures in oriented samples, Jesse and Sarah used a scanning electron microscope to study mineral assemblages and mineral chemistries, and Tyler worked with Dr. Brian Bodenbender to make detailed outcrop scale maps from the digital images. One of the results of this work was the decision to concentrate future efforts on the Stensjöstrand Naturreservat.

In May 2010, Ed Hansen returned to Sweden with two students, Leah Labarge and Wyatt Curry. The students were hired as unpaid interns by the SGU (Swedish Geological Society). The internship positions are open to students doing detailed mapping in areas where the Survey is doing larger scale regional mapping. The survey paid for the students' accommodations in the field as well as providing the field vehicle. Transportation to Sweden was paid for by Hope College. The students also benefited from the opportunity to interact with SGU field geologists. The field work lasted for three weeks during which Leah and Wyatt worked as a team mapping structures and lithologies to the north of the area that had been mapped the previous year. They also systematically collected samples of calc-silicate enclaves and did detailed outcrop-scale mapping of an exposure of mafic migmatite. Both the mafic migmatite and the calc-silicate enclaves became the subjects of detailed studies which combined SEM petrography, electron microprobe analyses, and, in the case of the mafic migmatites, zircon geochronology and whole-rock geochemistry. After returning to the U.S. in early June, both students went on to work on different summer projects. However, Leah continued to work on the project in her spare time and presented the results as a poster at the Geological Society of America annual meeting in Denver. 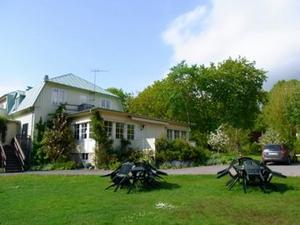 Hide
The guest house that accommodated the Hope College research team and the SGU research group
The third and final field season was in May of 2011. Three Hope College students, Leah LaBarge, Dean Hazle and Nate Erber worked with Ed Hansen in consultation with Leif Johansson. The students worked as a team, mapping lithologies and structures to the north and the south of the previous map areas. The goal was to find the northern and southern boundaries of the Stensjöstrand supracrustal sequence. They also remapped selected areas in the central portion of the map area in order to resolve ambiguities in the maps produced during the previous two field seasons. Sampling focused on the sillimanite-bearing semipelitic gneisses. Once again the students were unpaid interns of the SGU which provided housing and transportation in the field. The students stayed in the same guest house as the SGU mapping team allowing for fairly close consultation. Additional funding was provided by small grants from the Great Lakes College Association and Sigma Xi as well as a consultant's fee that had been paid to Ed Hansen for an unrelated project and donated to a special research fund. The field season lasted for three weeks after which the students returned to the United States where they worked on unrelated summer projects. However, the students continued to work on the Stensjöstrand project in their spare time producing both a final map and a poster that was presented at the 2011 Annual Meeting of the geological society of America.

The project met all of its scientific goals. The project has resulted in four presentations at the Geological Society of America: 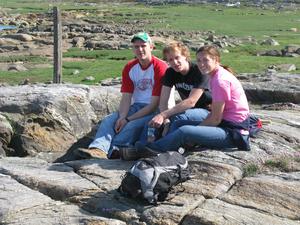 The project also met its educational goal, providing additional mapping experience to all of the students involved. All three of the students in the first group went on to graduate school in geology with two of them going on PhD programs. Three of the four students in the next two groups are still students at Hope College. The other student has graduated and is working for a mining company in a position for which his field experience has proven invaluable. The chance to work with geologists from another country was particularly rewarding for the students and they all became aware, in a very concrete way, of the international nature of modern geology. Leah LaBarge was particularly eloquent on this point when she gave a short talk about her experience at the Hope College summer research banquet.

Finally, this project has helped cement collaboration between geologists at Hope College, Lund University and the Swedish Geological Survey which may result in other undergraduate research projects. 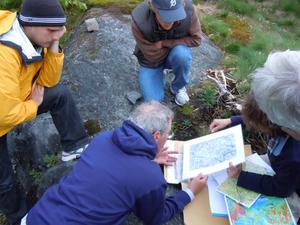 Hide
The Hope College research group discussing geology with a group from Lund University, From left to righe Nate Erber, Ed Hansen, Dean Hazel, Charlotte Möller, Leif Johansson
This project was the result of seizing an opportunity that developed as the consequence of an informal contact between an American and a Swedish geologist. It emphasizes the importance of cultivating such contacts and of taking advantages of the opportunities that result. The project was not funded by a single large grant but by cobbling together several smaller sources of funds, some of them relatively unconventional. This shows that it is possible to maintain a multi-year, international project without a large grant. Throughout the history of the project it has had to operate on a lean budget but some of the expediencies that were adopted as a consequence proved to be extremely beneficial. The May field season was originally adopted in order to save money. However, it meant that students could participate in the program and still have most of their summer ahead of them in order to pursue other opportunities. After the first year we did not have the money to pay summer stipends to students to follow up on their field work. However, the inspiration of the field work in Sweden, combined with the opportunity to present their results at the annual Geological Society of America meeting, proved to be sufficient motivation for the students to complete their projects in their spare time. The student internships with the Geological Survey of Sweden were first pursued simply as a way of covering some of the field expenses. However, they fostered closer collaboration and consultation between the students and geologists from outside the United States. The students during the last two field seasons all report that this was one of the most important parts of the experience. This was especially true during the third year of the project when the students and the SGU mapping teams stayed at the same guest house and thus had chances to interact outside of the field. Such opportunities are exceptionally valuable and should be fostered whenever possible.