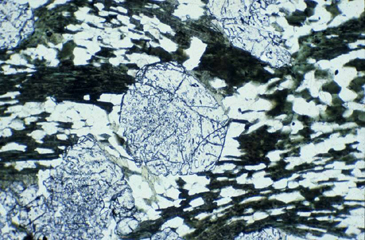 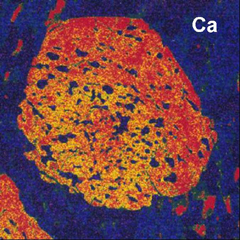 Our goal is to develop exercises that allow students to integrate diverse disciplines and data sets (structural geology, petrology, geochronology, geochemistry, and geophysics) to solve tectonic problems. The site is organized around "Icon Sites" that represent useful examples of the integration of at least several disciplines. Sample exercises are provided but raw data are also provided wherever possible so that the exercises can be adapted and modified.

We strongly encourage other workers to suggest and provide other examples illustrating the integration of geologic disciplines and data sets to solve or constrain geologic problems.

Our ultimate goal is to foster an "Earth Systems" approach to solid-earth geology and to demonstrate linkages, feedbacks, and interrelationships among the disciplines that yield important constraints on tectonic processes.

Our goal is to create a bank of resources for faculty who are interested in materials that students can use to integrate structural geology with petrology and geochronology. The focus theme for this resource is inverted metamorphism with emphasis on the Main Central Thrust. The data provided comes from an area in western Nepal and an area in eastern Nepal. This web site will initially include field maps, cross-sections and cross-section templates for students to fill in from the map data. For each of these two areas there will also be a suite of petrologic and geochronologic data. Some background on inverted metamorphism in the Himalaya and elsewhere in the world will be provided, as well as ideas for student exercises. Others are encouraged to submit additional materials that will augment this data set. 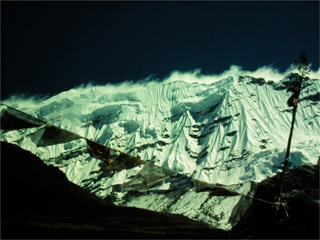 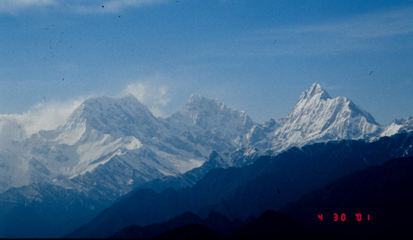 The Growth of North America: Integrating Structural Geology, Petrology, and Tectonics in the Grand Canyon.

Proterozoic rocks of the Grand Canyon, "the Inner Gorge", provide a great opportunity to integrate structural geology, metamorphic petrology, geochronology, and tectonics. Rocks of the Upper Granite Gorge have two strong deformational fabrics, a shallowly dipping S1 and a NE-striking and steeply dipping S2. S2 is extremely heterogeneous in intensity, varying from essentially non-existent to intense schistosity or shear zone fabrics. The goal is to understand these two fabrics in a broader sense. What do they represent in terms of the growth and stabilization of North American continental crust? A set of geologic maps and structural overlays will be provided along with horizontal thin section images that document the gradations from S1 to S2-dominated regions. Each horizontal thin section is as small map that can be directly related to the larger map. The first goal is to relate the deformation events to the metamorphic history. A series of photomicrographs will be provided that allow connections to be made between the deformation fabrics and the metamorphic history. Ultimately, a P-T-D path can be constructed. Then, a set of monazite data will be provided that allow absolute timing constraints to be placed on the tectonic history. Then, data from the literature can be used to build the new P-T-t-D path into the more regional history.

Data Sets and Resources
(Other workers are encouraged to submit additional data, exercises, and suggestions to the site.)

The goal of this exercise is to learn about the timing and interrelationship of structural features and metamorphism along shear zones. The shear zones examined are the Carthage/Colton Mylonite Zone (CCMZ) in the town of Colton, NY, and an unnamed shear zone in the town of Clare, NY. The CCMZ, although showing a well developed stretching lineation and numerous macrostructures, is completely recrystallized, showing few relict microstructures. It therefore must pre-date peak Grenville metamorphism. The Clare shear zone is late-or post-Grenville, and oriented samples show well developed microstructures. The CCMZ is recognized as the boundary between the Adirondack highlands, composed primarily of metaigneous rocks, and the Adirondack lowlands, composed primarily of metasedimentary rocks. Its significance has been variously interpreted as anything from a minor structural feature to a major suture zone. Material provided will include geochemical data, microphotographs, field photographs of the outcrops, structural data on the fabrics, the geologic map of this portion of the state of New York, and a list of references on the CCMZ.

The goal of this exercise is to characterize the conditions of and timing relationships between deformation fabrics and metamorphism in Grenville basement rocks of the Llano Uplift, central Texas. Llano is an erosional window into the heart of the Texas Grenville belt, where tectonism related to collisional processes along Laurentia's southern margin is recorded. An earlier dynamothermal metamorphism accompanied collision related deformation, whereas a later thermal metamorphism is related to late- to post-collisional granite intrusion. The exercise will use selected geologic maps, stereonet data, field photographs, and photomicrographs from the southeastern Llano Uplift along with PT diagrams and U/Pb geochronology to determine interrelationships between deformation and metamorphism and to re-create the conditions in the core of this part of the Grenville orogen. Useful references include: 1) Mosher (1998) provides a regional account of the Grenville Orogeny along the southern margin of Laurentia, 2) Carlson (1998) places Llano metamorphism into a regional tectonic context, and 3) "Rob's Granite Page" is a valuable web resource summarizing and illustrating Llano geology.


Deformation and Metamorphism in the Northwestern North Carolina Blue Ridge 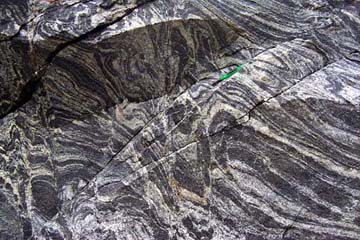 The purpose of this exercise is to characterize three orogenies through time: the Archean Limpopo Belt of South Africa; the Proterozoic Grenville Orogeny in upstate New York; and the Cenozoic North Cascades in Washington State. The overall goal of the exercise is to address the question: has contemporary style plate tectonics operated throughout Earth history? The primary scientific literature, datasets and available geologic maps will be used to explore the geologic components of each orogen, including: 1) Main rock units (photos of outcrops and rocks and photomicrographs will be provided as supplemental documentation); 2) Large-scale structures and structural style across the orogens; 3) Igneous bodies; 4) Metamorphic units, including metamorphic grade, isograds, P/T points and PTt paths); and 5) Geochronology (primary ages and thermochronology). Class activities will involve student (or small group) presentations on these key components, and reviews and critiques of tectonic models that have been proposed for each of these orogenic belts.

Using the paleomagnetic fold test and geochronology to constrain the age of fold and thrust deformation: Two examples from the Helena salient of the Cordilleran orogenic belt

This exercise will present two examples of the use of the paleomagetic data to constrain the age of fold in thrust belt deformation in two areas of the fold and thrust belt of western Montana. The first example is located along the southern margin of the Helena salient in the vicinity of the Jefferson Canyon Transverse Zone. The second is along the leading edge of the Helena salient along the easternmost margin of the fold and thrust belt. In both localities, sills are exposed in folds associated with thrust belt deformation. Map patterns suggest that the sills predate folding because the sill geometry mimics the fold geometry. If sill emplacement can be shown to predate folding, isotopic dates from the intrustions can be used to place limits on the timing of fold and thrust belt deformation. However, the relationship between folding and sill emplacement has to be unambiguously determined. This is done using the classic paleomagnetic fold test in which paleomagnetic vectors associated with sill emplacement are compared prior to, during and after untilting of the fold structures. The vectors are then compared to determine the orientation of the fold in which the paleomagnetic vectors are most-well grouped. Assuming that the paleomagnetic directions represent a thermoremanent magnetization, these data can be used to determine whether sill intrusion pre-dated deformation, was synchronous with deformation, or post-dated deformation. This exercise will contain examples of folds in which sills pre- and postdate deformation.

Data associated with this exercise will include:


Crustal Magma Traps: Linking the physical properties of magmas, the regional state of stress, and the presence of strength anisotropies in the crust to model magma ascent and emplacement.

What determines whether rising magma will end in a volcanic eruption or in pluton construction? Igneous Petrologists commonly typically discuss the importance of the physical attributes of the magma, such as neutral buoyancy or the temperature of the solidus, to answer this question. Structural geologists will tend to emphasize the importance of strength anisotropies in the crust such as unconformities or the brittle-ductile transition as the controlling factors in localizing magma emplacement. Yet the common occurrence of magma, considerably denser than the continental crust through which it rose, erupting in crustal rift environments suggests that buoyancy or the presence of a well developed brittle-ductile transition alone are insufficient to explain the arrest of rising magma. The goal of this exercise is to provide an opportunity for students to explore potential feedback between physical properties of the magma, the regional state of stress in the crust, and the presence of strength anisotropies in the crust in determining the level of at which rising magma stops and the final shape it will assume.

Resources Associated With This Learning Module: I. Overview of Cambrian Igneous Rocks of the Southern Oklahoma Aulacogen