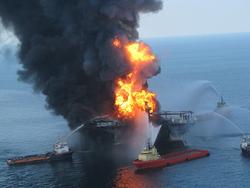 The failures and explosion at the Deepwater Horizon platform in the Macondo Oil Field resulted in one of the worst oil spills in American history. The effects of this event will be felt in communities and ecosystems along the Gulf Coast for decades to come.

Browse the complete set of Visualization Collections. If you have comments or additional resources to add to the page, use our Feedback box to let us know.

5 Years After BP Oil Spill, Effects Linger And Recovery Is Slow: This follow-up story from National Public Radio records the state of the recovery from one of the most devastating environmental accidents the US has ever seen. In many places along the Gulf, the appearance of "back to normal" hides lingering effects to wildlife, business, and even the rate of land subsidence.

Gulf of Mexico Oil Slick Images: Frequently Asked Questions: This page, from NASA's Earth Observatory, provides guidance for interpreting imagery of the BP Deepwater Horizon oil spill, such as understanding the effects of strong sunlight and differentiating oil from other variations on the ocean's surface.

Ocean currents likely to carry oil to Atlantic: A detailed computer modeling study indicates that oil from the massive spill in the Gulf of Mexico might soon extend along thousands of miles of the Atlantic coast and open ocean as early as this summer. The modeling results are captured in a series of dramatic animations produced by the National Center for Atmospheric Research (NCAR) and collaborators.

Oil Spill Volume Compared to San Francisco Victorian: This YouTube video helps put into perspective how much 5000 barrels of oil is by building up from a single gallon in increments that are easily compared to each other and to the human figure in the image for scale. 5000 barrels was the original working estimate of how much oil was entering the Gulf of Mexico per day from the Deep Water Horizon wreckage. As of May 14, 2010, the estimates had been raised to 60,000 barrels per day. Using the same analogy in the video, this would be six Victorian row homes of volume per day.

How big is the Deep Water Horizon Spill One of the Google Maps engineers designed an image of the oil spill in the Gulf of Mexico that you can move over any city to give you an idea of how large an area the spill is covering. It is a very effective way of putting the size of the spill in terms that people can identify with. The oil spill imagery is being updated periodically as the spill continues. The Google Earth plugin is required to view this visualization but a link is provided on the page.

US Oil Spill Explained: This video from Al Jazeera English presents a schematic of what happened in the oil rig fire and collapse as well as some of the ideas for containing the flow of oil from the wreckage.

Explosion, Leak at Gulf of Mexico Oil Well: This NASA Earth Observatory page presents a photo gallery of images of the Deep Water Horizon rig fire and oil spill. The images were taken from orbit and show the progression of the oil spill over the weeks since the initial explosion.

Oil spill growing in the Gulf: This interactive flash animation from USA Today allows users to track the extent of the oil spill along with satellite overlays and the locations of protective booms and other oil rigs and pipelines in the Gulf of Mexico.

Mapping Oil From Space: A Tricky Task for NASA: This brief news story from NPR discusses how NASA uses remote sensing to detect the extent of oil slicks on the ocean, using the specific example of the Deep Water Horizon slick. There is a link to the full report from the NASA Earth Observatory site.