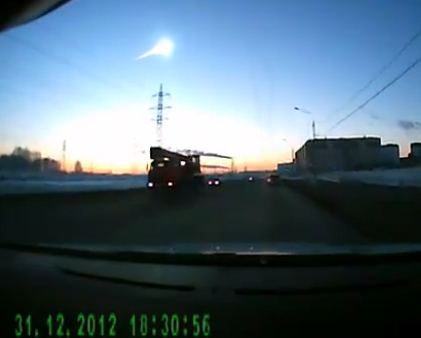 At 9:20AM local time on February 15, 2013, a meteor scorched across the skies above Chelyabinsk, Russia. The meteor's entry into the atmosphere causes a bright streak of light, described by many as brighter than the sun. The meteor traveled some 200 miles through the atmosphere before vaporizing in an explosion that shattered windows and set off car alarms. More than 1000 people reported injuries, mostly from flying pieces of broken glass. Coincidentally, the meteor arrived on the same day as the asteroid 2012 DA14 made it's closest approach to Earth, ~17,200 miles - inside the orbits of geostationary weather and communication satellites. But the two events were unrelated.

Browse the complete set of Hazards Events and Visualization Collections. If you have comments or additional resources to add to the page, use our Feedback box to let us know.

Jump Down To: Information and News Reports | Teaching Activities

To Understand A Russian Fireball, Physicists Turn To YouTube
This story from NPR has a short video that explains how scientists were able to use the wealth of video to learn more about the meteor than they had been able to before.

This image from the USGS shows tracks from 3 different seismic stations that registered the explosion of the meteor over Chelyabinsk, Russia on February 15, 2013. The stations are in Kazakhstan (BRVK and KURK) and Russia (ZAA0). The USGS has also put up an information page about what their sensors detected. Since this wasn't an earthquake, but did register seismically, the page is noticeably different that those for actual earthquakes.

A meteor streaked across the sky of Russia's Ural Mountains: This image gallery from The Independent shows images of the passing of the meteor as well as some of the damage caused by the shock wave from the explosion.

Huge Meteor Blazes Across Sky Over Russia: The Bad Astronomy blog at Slate.com covered the meteor from early on. There have been several updates throughout the day and the author links off to new information as it's available. The article contains several very good videos of the meteor and the effects of the shock wave. There is also a video compilation of images caught by the European weather satellite METEOSAT-9 of the trail left by the meteor. Combining these images with Google Earth, one researcher was able to determine that the tail was around 200 miles long.

Meteorite in Russia: all videos in one place (http://say26.com/meteorite-in-russia-all-videos-in-one-place-link broken): This web developer lives near Chelyabinsk, Russia and has combed through YouTube and collected a large number of videos related to the meteor on this page. Each video has a short caption in English since the video titles are almost all in Russian.

Update on Russia's Mega-Meteor: This article from Sky and Telescope summarizes what is known about the Chelyabinsk meteor about a month after the event. Researchers are working on pinning down its pre-impact orbit and origins as well as searching the landscape for fragments. The page also provides links to particularly good videos of the meteor as it burned up in the atmosphere.

Russia Meteor Not Linked to Asteroid Flyby: This page from NASA's Jet Propulsion Laboratory provides preliminary information about the meteor impact in order to debunk any connection between the meteor and the asteroid 2012 DA14 which made it's closest approach to Earth some 12 hours later. The image at the top of the page also outlines the area over which meteorite fragments are most likely to have fallen after the meteor exploded.

A cosmic coincidence, but the Chelyabinsk meteor and 2012 DA14 are reminders of the deadly power of small asteroids: This article from The Independent was written by Professor Alan Fitzsimmons, Astronomer at Queen's University Belfast. He speaks to the state of research on asteroids and finding ones that pose large regional risks as well as those capable of global devastation.

Planetary Science resources from across Teach the Earth »

Planetary Science resources from across Teach the Earth »