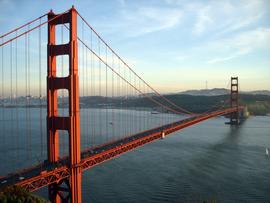 The Golden Gate Bridge and San Francisco, CA at sunset taken from the Marin Headlands. Details
Compiled by Rob Thomas of SERC.
The earthquake that struck San Francisco on April 18, 1906 remains one of the strongest and most significant earthquakes in US history. The fire that developed in its aftermath brought the city to its knees. This collection presents links to images, films, panoramas and animations about the earthquake and fire. Even more information can be found at sites like the USGS 1906 San Francisco Quake site and the 1906 Earthquake Centennial Alliance.

Browse the complete set of Visualization Collections. If you have comments or additional resources to add to the page, use our Feedback box to let us know.

1906 Ground Motion Simulations, USGS (more info) A series of visualizations of ground motion and fault slip during the 1906 earthquake. Included are several movies that animate the ground motion's growing intensity as it radiates from the epicenter in the seconds after the earthquake. Available movies show not only the whole fault, but also the shaking in specific locations, including San Francisco and surrounding towns. The movies are in QuickTime format.

Animated burn map ( This site may be offline. ) An animation of the spread of the fire that consumed San Francisco in the wake of the 1906 earthquake. The animation, hosted by the Internet Archive, is a 21-second .avi file that is playable by QuickTime and other media players.

MMI Shakemap from Boatwright and Boondock (2005) (more info) This new shakemap is the result of much additional research by John Boatwright of the USGS based on the Lawson Report conducted in the immediate aftermath of the 1906 Earthquake. The Lawson Report was based on interviews with those who felt the quake and investigations of its physical effects on the landscape. More information about the Lawson Report and the new research by John Boatman can be found in a NPR story (more info) from April 18, 2006. Additional USGS resources can be found at theUSGS Earthquake Hazards Program (more info) page on the 1906 quake.

A Virtual Tour of the 1906 Earthquake in Google Earth, USGS (more info) A series of Google Earth files illustrating the 1906 San Francisco Earthquake, including fault diagrams, ground motion overlays, and locations from which historic photographs were taken. The data is overlaid on a fully interactive satellite map of the earth. These KMZ files are viewable with a free copy of Google Earth.

Interactive Map of 1906 Earthquake Photos, The Bancroft Library (more info) An interactive map of the city that allows the Bancroft's photographic archive of the quake to be searched by region of the city. The map is divided into regions, and points of interest are highlighted. By comparing photographs taken in each region, it's possible to compare how different areas of the city were affected by the earthquake.

Seismogram of the 1906 Earthquake, USGS (more info) A seismogram of the 1906 Earthquake from a recording station in Gottingen, Germany. The records here show 26 minutes of north-south and east-west motion, recording the P and S waves from the great quake. When the surface waves arrived 26 minutes later, they threw the seismograph off-scale. Additional USGS resources can be found at the USGS Earthquake Hazards Program (more info) page on the 1906 quake.

San Francisco earthquake and fire, April 18, 1906, Library of Congress (more info) This silent film in four parts documents the damage sustained by San Francisco and its famous landmarks. Recorded in the days after the disaster, the film shows San Franciscans at work, cleaning the debris and trying to deal with the disaster. The film is available in Real Media, QuickTime and MPEG format.

San Francisco disaster, Library of Congress (more info) A silent film from May of 1906 that seeks to simulate the San Francisco fire and earthquake using a small-scale model of the city. The film's realism and accuracy are questionable-the flames reach unrealistic heights, and the real fire was more scattered than the flame shown-but it marks an early attempt to visualize and recreate the disaster. The film is available in Real Media, QuickTime and MPEG format.

Scenes in San Francisco, [no. 1], Library of Congress (more info) A series of views and pans across the ruins of San Francisco, filmed 9 May 1906. Included are scenes of people living amongst the wreckage, including businesses operating from temporary offices on their former lots and San Franciscans going about their daily lives. The film is available in Real Media, QuickTime and MPEG format.

San Francisco after the earthquake and fire of 1906, Library of Congress (more info) Silent footage of San Franciscso and the camps that opened to house residents in the days after the earthquake and fire. This film dates from late April 1906, and it shows the beginning stages of San Francisco's recovery as well as the challenges faced by residents in their now drastically changed lives. The film is available in Real Media, QuickTime and MPEG format.

San Francisco earthquake aftermath, Internet Archive (more info) A series of films hosted by Internet Archive that show the aftermath of the earthquake and efforts to rebuild. The films are available in a variety of file formats of varying quality, and are digitized from period silent films of the disaster. Included in the collection is an Edison newsreel from the period, as well as footage of trolley rides through the destruction.

[The 1906 San Francisco Quake, in color This blog post from the Smithsonian's National Museum of American History features two color images taken 6 months after the the San Francisco Earthquake and Fire by Frederick Ives, one of the early pioneers of color photography.

360° panorama of the ruined city, The Bancroft Library (more info) A 360&amp;deg; panoramic image of San Francisco after the 1906 earthquake, as seen from the roof of the Fairmont Hotel. The photographs show the destruction of the city, from the Financial District to Alcatraz Island. This panorama was assembled by the Bancroft Library from 11 different images in two different library collections, using photographs taken by two different photographers.

San Francisco Earthquake 1906, Panoramas from Films (more info) A chronologically arranged series of panoramas, assembled from archival film in the Library of Congress. These photos, viewable as JPEGs, were stitched together by volunteers using individual frames from camera pans in the original films.

Photograph of San Francisco in ruins from Lawrence Captive Airship, Library of Congress (more info) George R. Lawrence's famous image of post-earthquake San Francisco from 2000 feet above the bay. Captured using an ingenious system of kites, this fish-eye photograph captures the entire city San Francisco after the quake. The photo is available in several sizes and formats ranging from small JPEG files to a 157 MB TIFF version of the iconic image.

San Francisco from a balloon, USGS (more info) This photograph of the ruined city was taken five weeks after the earthquake from a tethered balloon. Looking out over the buisiness district from Nob Hill, the photograph captures the magnitude of the destruction, with only a few gutted buildings still standing.

San Francisco 1906 Earthquake Stereo Postcards, Ingleside Terraces Home Association (more info) A series of stereo postcards of the earthquake's destruction, showing the destruction of San Francisco using 1906 3D technology. These postcards, captured in the months following the quake, can be viewed by crossing the eyes, or using a stereoscope.

Earthquakes resources from across Teach the Earth »

Earthquakes resources from across Teach the Earth »