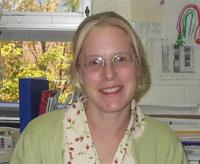 Kristen St. John is one of the leaders of the 2006 "Early Career Geoscience Faculty" Workshop. This profile is based on an interview conducted by Carol Ormand on May 16, 2006.

Click on a topic below, or scroll down to read the entire profile: Teaching * Integrating teaching and research * Balancing responsibilities * Advice for new faculty

Teaching future teachers
After earning her Ph.D. from The Ohio State University, studying paleoclimate records via marine sediments, Kristen went directly into her first teaching position as an assistant professor at Appalachian State University. As it turned out, that position was not a great "fit" for Kristen, so she was applying for other jobs even as she was applying for tenure. On the other hand, while she was at Appalachian State, Kristen discovered that she enjoys teaching future teachers.

While Kristen was at Appalachian State, the geoscience education professor retired. Since no-one else in the department wanted to take over those courses, and Kristen was the newest faculty member, it fell to her. Somewhat to her surprise, she found that she enjoyed, and was good at, teaching undergraduates and current middle and high school teachers how to teach content in the geosciences. So, when she was searching for a new job, she focused her attention on positions that would allow her to continue doing that, in addition to her work in marine geoscience. In January, 2005, James Madison University hired her as one of two geoscience education specialists. JMU is committed to being a regional leader in teacher training, allowing Kristen a great deal of freedom and strong departmental support.

Integrating teaching and research
Since graduate school, Kristen has been involved with scientific ocean drilling, first through the Ocean Drilling Program and now through the Integrated Ocean Drilling Program. In 2005 she was asked to participate in a very exciting project: the School of Rock Expedition. The Integrated Ocean Drilling Program and the US organizing body Joint Oceanographic Institutions, in a bold new move, decided to use a transit-leg to give school teachers the opportunity to learn firsthand about scientific ocean drilling. Kristen was asked to be one of two scientists on this leg. On the transit-leg, where the ship has only a skeleton crew, high school and middle school teachers were introduced to several aspects of marine geoscience, ranging from early evidence of plate tectonics to cutting edge climate change research. They described sediment cores, examined equipment (magnetometers, etc.), and developed exercises for their students using real data (photos, published scientific data sets, and more).

That JOI/IODP project was an ideal opportunity for Kristen in many ways. It combined two of her primary enthusiasms, marine geoscience and teacher preparation. It gave participants a greater understanding of the process of science, in addition to exposing them to science content. It allowed the participants to learn science in context, right on the ocean. These are all elements she strives to include in her teaching.

Strategies for balancing work and personal life
When Kristen interviewed for her current position, at JMU, she was eight months pregnant with her second child. Because she was so close to her due date, her husband came with her, just to be available. Of course, that meant that their preschool age daughter came with them, too. So, right from the start, the department at James Madison knew about her family responsibilities. At the same time, Kristen is, of course, fully committed to her job. She feels fortunate to have a supportive and flexible husband, who has moved with her as she took each of her teaching positions. She also feels fortunate to be in a supportive department, where she has been able to bring her kids to work when she needs to. (She has even brought them to class, and taught with her son in a baby backpack. While it is not ideal, it allows her to teach when she would otherwise have to cancel class.)

Raising a family while working as a faculty member is, of course, a challenge. Their son attends a good daycare program, and their daughter, who is now in kindergarten, is in an excellent after school program. Occasionally, circumstances require more complicated juggling: when Kristen was on board the IODP ship for two weeks, her husband, coincidentally, was away for Navy Reserve training. Fortunately, Kristen's parents were able to come to their home (a 5 hour drive) to take care of the kids. Ultimately, though, Kristen feels that these adjustments are worth it; she gets to do what she loves for work, and have a family, too.

Advice for early career geoscience faculty
Kristen offers several pieces of advice to anyone starting a career in academia, based on her own experiences. First, she says, trust your instincts. If something doesn't feel quite right for you, it probably isn't. In retrospect, for example, Kristen wonders whether she should have taken the position at Appalachian State at all.

Second, maintain and build your connections. Her connection to the the scientific ocean drilling community and administrative structure provided Kristen with a wonderful teaching/research opportunity. In addition, connecting with her new colleagues has created new opportunities—to talk about teaching and get advice from more experienced teachers, and just to build a sense of collegiality with them. Don't pass up the opportunity to go to lunch with your colleagues, she says—it's worth making the time to connect with the people you work with.

Third, be aware of who actually has power or influence in your department—this is not always the department chair—and stay on their good side, without compromising your principles and values. You don't need to go out of your way to curry their favor, but don't actively work against them.

Last, give yourself a break. You don't have to be superwoman or superman; it's okay to make mistakes. For example, teaching experiments don't always work. When they fail, use the opportunity to learn from the experience. You might have to change how you grade an exercise, focusing on the process instead of the outcome, but salvage what you can, and then move on. Over time, these experiments will lead to improvements in your teaching, and therefore in your students' learning. And that's what's important.