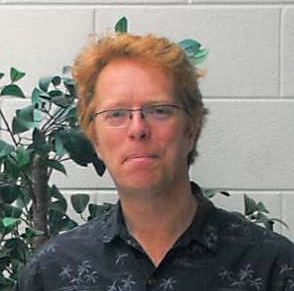 The University of Alabama is a public research university
Andrew Goodliffe is one of the leaders of the 2012, 2014, 2015, 2016, 2017, 2018, and 2019 "Early Career Geoscience Faculty" Workshop. Prior to the workshop, we asked each of the leaders to describe their careers, for the benefit of workshop participants, by answering the questions below.

I completed a B.Sc. in Applied Geology and Physics at the University of Plymouth in the U.K. in 1989. As an undergraduate I got to work during my vacations as a geotechnical engineer (following a less successful stint in the hotel laundry industry), and then helping out on a project to look at sea level change through a high-resolution marine seismic study. These two paths led me to realize that I loved fieldwork and especially the geophysics end of things. I was erroneously determined to do an M.Sc. in geophysics and head into the oil industry until I saw an opportunity for an M.S. thesis working on a gravity and magnetic study in Katmai National Park, Alaska. I spent a little over three years at the University of Alaska Fairbanks doing fieldwork in Katmai National Park and all around the state. During that time I also did a couple of internships in the oil industry and started to look for ways to combine my gravity and magnetic experience with other methods including seismic reflection. I ended up moving to the University of Hawai'i to start a Ph.D. project that used marine geophysics to study the rifting to seafloor spreading transition in the Woodlark Basin, Papua New Guinea. This project led to some amazing field opportunities in Papua New Guinea and throughout the southwest Pacific. On completing my Ph.D. I continued as a postdoc and then research faculty, working also on rifting related projects in Greece, Australia, and the Mariana system, among others. In 2004 I made the move into a tenure track position at The University of Alabama, where I have since been tenured. Though I have continued my research in Papua New Guinea, I have added projects in the Gulf of Mexico (both rift related and oil spill related) and Alabama (focused on geological characterization for carbon sequestration) to my portfolio.

In November 2012 I moved into a 50% administrative position, also serving as Assistant Dean in the Graduate School. In this role I was responsible for the recruitment, admissions, and graduate support program efforts at the graduate level for The University of Alabama. I have since moved into a full time administrative position as Associate Dean as my university increases it's focus on graduate education and research. Despite these extra responsibilities I still advise research students and occasionally teach. Trying to remain current in my research is now an ongoing challenge.


What were some of the challenges you faced in your early years of full-time teaching? Could you briefly describe how you overcame one of those challenges?

The biggest challenge was overcoming the overwhelming amount of things that I had to do as an early career faculty member. I can honestly say that attending this workshop in 2004 was one of the most meaningful ways in which I overcame this. The meeting made me realize that there was a peer group out there that was experiencing the same anxiety as I was. Teaching was a new thing to me – I had been a research assistant for all but one semester of my graduate career. At both institutions there was little interaction between undergraduate and graduate students. Being introduced to modern pedagogical (this was a new word to me!) methods was a huge help in putting together new classes (and managing the classrooms).


How did you make the transition from your Ph.D. research to your current research program?

Related to the question above, this was another challenge. I absolutely love working in Papua New Guinea on active rifting related questions and would have embraced continuing working there. However, it was clear that I had to move away from what was seen at my university as "my advisor's work" and find something new. The key to that transition was using existing and new contacts to develop projects independently of my old advisor. Luckily, as marine geophysics is a team endeavor, I quickly began working on developing new proposals with previous collaborators in areas such as the Red Sea and the Aleutians. This allowed me to start getting the proposals into the system. Though many of these proposals were unsuccessful, it was an important learning process. Ultimately the development of M.S. theses based on local problems was a key part of the process. This gave me the opportunity to meet a totally new group of researchers. We quickly began thinking about ways in which geophysics could help solve geological problems in the southeast. This led to much of my recent work on geological carbon sequestration.

I was given a lot of freedom in how I developed my teaching/research goals. I was able to teach existing classes and develop new ones, especially at the graduate level. As long as these classes could be justified and serve a role in the department, it was OK. As long as my research goals were ultimately successful, I did not have to worry about aligning them with existing goals for my institution – rather the emphasis was on finding new areas that the institution could make an impact.


Many of the new faculty members in these workshops are interested in maintaining a modicum of balance while getting their careers off to a strong start. Please share a strategy or strategies that have helped you to balance teaching, research, and your other work responsibilities, OR balance work responsibilities with finding time for your personal life.

This is a difficult one. I am not sure that I am entirely successful at this! For me, a key part is having a wife who is also a geoscientist and is very supportive. The reality of our jobs is that we have to balance many different responsibilities and do them all well. A tactic that I have taken of recent is to try and arrange my responsibilities so that I can focus on one additional area in a given semester. For example, I may decide that I will focus on developing a new class, or developing proposals in another. This has largely been an aspirational goal as other things always come up – but it does work to some degree!


What advice do you have for faculty beginning academic careers in geoscience? What do you know now that you wish you had known as you started your career in academia?

There is so much that I did not know about an academic career when I became a faculty member. You quickly realize that this is one of the few careers for which our education does not prepare us. Our daily workload typically includes such a wide range of activities that it can make your head spin. Being able to function in this sort of environment, where you might be one moment talking to an NSF program manager about your brilliant science, and then the next moment talking to an intro geology student about how to identify granite, is key.