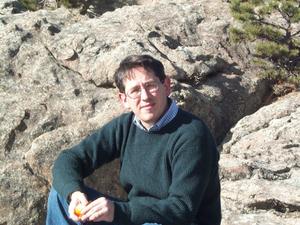 Hide
Photo of Eric Baer, courtesy of Eric Baer and Highline Community College.
Most of the information on this page is from an interview conducted by Carol Ormand on February 7, 2006.

Eric Baer is an instructor in the Geology department at Highline Community College, in Des Moines, Washington. Highline is a two-year community college, located near Puget Sound, just south of Seattle. As an instructor there, Eric teaches 15-18 hours in the classroom per week (including labs), does research because he wants to (it's not expected of him, but he devotes about 10% of his work time to it), is expected to engage in some level of service to the larger community, and has summers off. He is also a single father, the primary parent to his five-year-old daughter. As an involved parent, he spends about two hours each week volunteering in his daughter's classroom.

Jump down to:
Challenges and strategies | Making choices | Advice for new faculty members

Eric describes limited time as his biggest challenge. The need to make choices, he says, is constant. Every day he is faced with questions like how many hours his daughter will be in daycare, what assignments to give his students (balancing the amount of time he can devote to grading their work against being effective as a teacher), and more—what to do at any given moment is a question of time. As a single parent, Eric faces the additional challenge of finding time for professional development, especially when that involves travel. Traveling to conferences, field trips, or workshops means finding someone to take care of his daughter.

Being a single parent, though, doesn't stop Eric from traveling for work. Sometimes, he says, her mother takes care of her while he's gone. He also has a network of friends—mostly other parents—who can occasionally help out. When he's lucky, travel takes Eric to someplace he has family; he loves it when GSA is in Denver, because he has family there. He was even lucky enough, once, to find a drop-in daycare center that would take his daughter while he was in Corvallis for a conference. However, there are times when Eric just can't find someone he trusts to take care of his daughter. In those cases, he stays home.

Making a choice about whether to go out of town for a conference or workshop isn't only about finding childcare, though. Eric also considers whether he can afford to go, both in terms of money and time. If his daughter comes with him, Eric buys her plane ticket; faculty travel allowances don't cover family members. In addition, there is always the question of how going on a trip will impact other things. For example, how will being away from his classes affect the time before he goes and after he comes back? What about the time it will take to put together a talk or a poster for the conference? Where will that time come from? Only when he feels that the benefits of going on a trip outweigh the "costs" will Eric go.