TCE and PCE in Wells G and H

Trichloroethylene (TCE) and perchloroethylene (PCE) are toxic chlorinated hydrocarbons that were first discovered in wells G and H in May 1979. Water from well G contained 267 parts per billion (ppb) TCE and 21 ppb PCE. Water from well H contained 118 ppb TCE and 13 ppb PCE. At the time, the U.S. Public Health standard for TCE and PCE dissolved in public drinking water was 5 parts per billion. [One ppb is the same as one micro-gram per liter.] It is important to note that detection of TCE, PCE, and other organic solvents in water samples was not possible prior to about 1973 and the detection equipment (gas chromatograph/mass spectrometer) was not commercially available until the late 1970s.

Physical and Chemical Properties of TCE and PCE 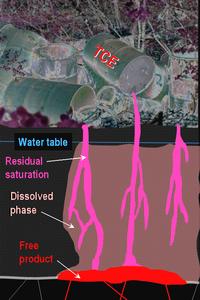 TCE is a volatile organic compound (VOC) with the chemical formula C2HCl3. In the environmental industry, it is called a dense, non-aqueous phase liquid because it has a high density (1.465 g/ml), low solubility in water (1.070 g/L at 20oC), and it adsorbs onto carbon (Koc = 2.03-2.7). TCE has a vapor pressure of 74 mmHg and a Henry's law constant of 0.011 atm-m3/mol. As a result of these properties, TCE spilled on the land surface can be found in the subsurface as highly concentrated free product, as fingers of residual saturation moving more or less vertically through the saturated zone, and as dissolved molecules in ground water. The TCE measured in Woburn wells G and H was in the dissolved form.

PCE is also a VOC and a dense, non-aqueous phase liquid. PCE has the chemical formula C2Cl4. PCE has a density of 1.6227 g/ml at 20oC, a solubility in water of 150 mg/L at 25oC), and it adsorbs onto carbon (Koc = 2.2-2.7). PCE has a vapor pressure of 18.47 mmHg and a Henry's law constant of 0.018 atm-m3/mol. As a result of these properties, PCE spilled on the land surface can be found in the subsurface as highly concentrated free product, as fingers of residual saturation moving more or less vertically through the saturated zone, and as dissolved molecules in ground water. The PCE measured in Woburn wells G and H was in the dissolved form. Compared to TCE, PCE is more dense, less soluble, and less volatile.

Uses of TCE and PCE 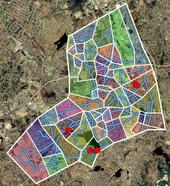 Hide
TCE purchased in a one gallon can

According to Wikipedia, "TCE is an effective solvent for a variety of organic materials. When it was first widely produced in the 1920s, its major use was to extract vegetable oils from plant materials such as soy, coconut, and palm. Other uses in the food industry included coffee decaffeination and the preparation of flavoring extracts from hops and spices. It was also used as a dry cleaning solvent, although tetrachloroethylene (also known as perchloroethylene) surpassed it in this role in the 1950s." Before its toxic properties were recognized, TCE was used from about 1930 as a volatile anesthetic and analgesic in millions of patients. Due to concerns about its toxicity, use of trichloroethylene in the food and pharmaceutical industries has been banned in much of the world since the 1970s.

According to Wikipedia, perchloroethylene (PCE) is a manufactured chemical compound widely used for the dry cleaning of fabrics (often commonly called dry-cleaning fluid) and for metal-degreasing. It is also used to make other chemicals and is used in some consumer products. Other names for PCE include perchloroethylene, perc, and tetrachloroethylene. PCE is a nonflammable liquid at room temperature. It evaporates easily into the air and has a sharp, sweet odor. Most people can smell PCE when it is present in the air at a concentration of 1 part per million (1 ppm). Michael Faraday first synthesized PCE in 1821.

Toxicity of TCE and PCE

Based on the information in Wikipedia, "When inhaled, trichloroethylene depresses the central nervous system. Its symptoms are similar to those of alcohol intoxication, beginning with headache, dizziness, and confusion and progressing with increasing exposure to unconsciousness. Much of what is known about the human health effects of TCE is based on occupational exposures. Beyond the effects to the central nervous system, workplace exposure to TCE has been associated with toxic effects in the liver and kidney.

"The carcinogenicity of TCE was first evaluated in laboratory animals in the 1970s. Cancer bioassays performed by the National Cancer Institute (later the National Toxicology Program) showed that exposure to TCE is carcinogenic in animals, producing liver cancer in mice, and kidney cancer in rats. Numerous epidemiological studies have been conducted on TCE exposure in the workplace, with differing opinions regarding the strength of evidence between TCE and human cancer. The National Toxicology Program's 11th Report on Carcinogens categorizes TCE as 'reasonably anticipated to be a human carcinogen', based on limited evidence of carcinogenicity from studies in humans and sufficient evidence of carcinogenicity from studies in experimental animals. Recent studies in laboratory animals and observations in human populations suggest that exposure to TCE might be associated with congenital heart defects. While it is not clear what levels of exposure are associated with cardiac defects in humans, there is consistency between the cardiac defects observed in studies of communities exposed to TCE contamination in ground water and the effects observed in laboratory animals. TCE can also affect the fertility of males and females in laboratory animals, but the relevance of these findings to humans is not clear.

"The health risks of TCE have been studied extensively. The U.S. Environmental Protection Agency (EPA) sponsored a "state of the science" review of the health effects associated with exposure to trichloroethylene. Based on this review, the EPA published a risk assessment that concluded trichloroethylene posed a more significant human health risk than previous studies had indicated. EPA's report provoked considerable debate about the quality of evidence describing the health risks of trichloroethylene and the methods used to assess that evidence. In 2004, an interagency group composed of the EPA, Department of Defense, Department of Energy, and the National Aeronautics and Space Administration requested the National Academy of Sciences (NAS) to provide independent guidance on the scientific issues related regarding TCE health risks. The NAS report concluded that evidence on the carcinogenic risk and other potential health hazards from exposure to TCE has strengthened since EPA released their toxicological assessment of TCE and encourages federal agencies to finalize the risk assessment for TCE using currently available information, so that risk management decisions for this chemical can be expedited. (This information was abstracted from Wikipedia.)

More information about TCE can be accessed at ATSDR - TCE Toxic Profile.

According to Wikipedia, "Like many chlorinated hydrocarbons, PCE is a central nervous system depressant and inhaling its vapors (particularly in closed, poorly ventilated areas) can cause dizziness, headache, sleepiness, confusion, nausea, difficulty in speaking and walking, unconsciousness, and death. After repeated or extended skin contact, PCE may dissolve fats from the skin, resulting in severe skin irritation in work environments where people have been exposed to high concentrations.

"Results from some studies suggest that women who work in dry cleaning industries, where exposures to PCE can be quite high, may have more menstrual problems and spontaneous abortions than women who are not exposed. However, it is not known if PCE was responsible for these problems because other possible causes were not considered. Results of animal studies, conducted with amounts much higher than those that most people are exposed to, show that PCE can cause liver and kidney damage. Exposure to very high levels of PCE can be toxic to the unborn pups of pregnant rats and mice. Changes in behavior were observed in the offspring of rats that breathed high levels of the chemical while they were pregnant. The International Agency for Research on Cancer has classified PCE as a Group 2A carcinogen, which means that it is probably carcinogenic to humans.