Do trials seek to find truth or is the purpose of a trial to resolve a conflict. Anne Anderson wanted to find the truth, to identify who was responsible for causing the death of her son Jimmy. It was a simple goal. Yet, as trial discovery progressed and the trial began, it was evident that identifying a clear-cut truth regarding who was responsible for Jimmy's death would be difficult. This webpage looks at some of the objectives of trial proceedings and whether the ultimate goal is to find truth or to resolve the conflict between the parties (Bair, 2001) (Acrobat (PDF) PRIVATE FILE 4MB Jun18 09). Learn more about the legal processes and events in a civil trialhere. 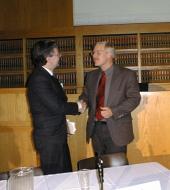 Statistics regarding litigation are difficult to quantify. Specific groups often focus on their industry or associations litigation trends, and it is often difficult to extend these trends broadly across judicial databases. About 90 percent of the cases initiated in federal district courts were settled out of court prior to trial, whereas about 80 percent of all state court cases are settled. The insurance industry has compiled statistics relative to its own litigation environment, available from the Insurance Information Institute.

A common theme in textbooks regarding trial procedures is that there is no certainty in going to trial. Although a defendant may have been seen "pulling the trigger" in an apparent open and closed case, information brought out at trial may show that the defendant was acting in self-defense. There are countless examples of jury decisions that are opposite of the expected result prior to the trial. Going to trial is a risky venture with no guaranteed outcome.

Personal injury cases can be risky for the attorneys who practice in this arena. Most attorneys routinely charge one-third of the court settlement for handling personal injury lawsuits. The typical contract between attorneys and their clients requires the client provide no upfront money, and the attorneys are only able to collect their fee when a decision occurs to the benefit of their client. Most personal injury attorneys are not interested in cases where they would have to do considerable pre-trial preparation, particularly in court cases that require retaining and paying for expert services as part of creating trial arguments. Successful personal injury lawyers typically do an excellent job at screening potential cases, and making firm decisions regarding those they intend to pursue and those they will not pursue because of the considerable risk versus reward ratio these types of cases present.

Truth vs. Conflict Resolution in the Woburn Trial

As described in "A Civil Action," Schlichtmann Conway and Crowley, LLC, originally considered the Woburn case to be too risky. They recognized it would take a considerable investment to be able to prove liability on the part of the potential defendants. However, when Schlichtmann Conway and Crowley, particularly Jan Schlichtmann identified the defendants as being W.R. Grace & Co. and Beatrice Foods, Inc., both large, successful international corporations, their position regarding the Woburn case changed. Many "Monday morning quarterbacks" speculate that Schlichtmann was initially enamored by the large resources of the two corporations and this drove him to pursue the Woburn case. According to (Harr 1995 ), as the case proceeded, Schlichtmann and his cohorts became more focused on identifying the those parties responsible for contaminating the wells and creating the cluster of childhood leukemia cases in Woburn. Regardless of motives, Schlichtmann and his law firm took on much more financial risk than is typical for personal injury cases. This link is to the specific chronology of events in the Woburn Toxic Trial.

The defendants' attorneys showed a more pragmatic approach to the trial. They analyzed the plaintiffs' arguments and sought both expert and circumstantial means to discredit their arguments. During the pre-trial activities, Beatrice Foods sought an agreement with the plaintiffs. However, the settlement request presented by Schlichtmann, on behalf on the plaintiffs, was deemed excessive, so the case went to trial. Up to and through the trial date, the defendants' continually evaluated their case and updated their potential risks. This link is to the specific chronology of events in the Woburn Toxic Trial.

Truth Versus Conflict Resolution Strategies for the Mock Trial

Identifying the sources of TCE and PCE reaching municipal wells G and H, and then presenting medical evidence showing the cause-and-effect between prolonged ingestion of the contaminants and the types of childhood leukemia of the plaintiffs were difficult, technical and legal tasks for the plaintiffs' attorneys. During the trial, it could be generalized that the plaintiffs sought to expose the truth regarding the contamination and the injury to their children, whereas the defendants focused on resolving the conflict between their businesses and the plaintiffs.

Since the federal trial in 1986, there has been much re-analysis of the science related to the ground-water flow system at Woburn based on the data analysis in a report published by the U.S. Geological Survey (Myette et al. 1987 ). As in the 1986 trial, there are arguments in each parties' interpretation of the data. Data are merely data. Data need analysis and interpretation. The challenge is in ethically preparing convincing legal arguments based on the scientific facts.