Where are we now? Is there a problem with K-12 Earth Science?

More than any other secondary school science, Earth science is contextually homeless. How and when it is taught varies significantly around the country and from school to school. Earth science is most commonly taught at the eighth or ninth grade, either as a separate course or as part of a "general science" or "integrated science" course. At the high school level, Earth science topics may be included in courses such as Environmental Science, or in electives such as Astronomy. For these reasons, data on the number of students taking Earth science and the qualifications of their teachers can be difficult to find and interpret. Although biology, chemistry, and physics education are undergoing changes, most American high schools do offer year-long courses in these three areas, and most science teachers have a major in one of these subjects. The situation is different in Earth science, where most teachers have only introductory coursework in the geosciences. 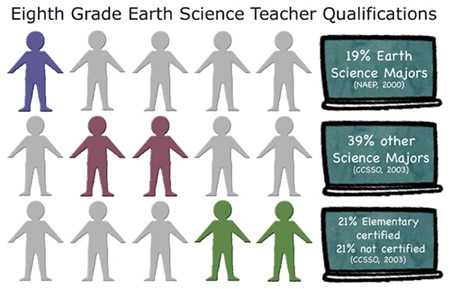 Introductory Earth Science courses are most often taught at the eighth-grade level, and are taken by approximately 20% of eighth grade students. If not taught as a separate course, earth science topics from the areas of geology, astronomy, and meteorology are usually taught in general or integrated science courses at the middle school level. Most middle school science teachers with a science major are biology majors with introductory courses in other science areas.

At the high school level, 15% of science teachers are assigned to teach one or more sections of Earth Science, about the same percentage as physics. Of those 15% of science teachers, 72% are certified to teach Earth science, with a major or a minor concentration in the Earth sciences. This percentage declined eight-points from 1994 to 2002 (CCSSO, 2003).

At the middle school level where most Earth Science is taught, 58% of U.S. science teachers are certified to teach science (life science, physical sciences, earth science, or broad-field science), while the remaining 42% are split between teachers with elementary education certification and those with no teaching certification, who may or may not have science training. Less than 19% of those teaching middle school science have an Earth science major (NAEP, 2000, in CSSO 2001). Middle school science is hardest to staff with science specialists, so middle school teacher qualifications are a key indicator of teacher preparation and supply.

Earth science at the elementary level is highly variable. Nationally, 2-3 hours per week are devoted to science. Some schools have science specialists, but the science taught in most classrooms depends on the teacher's training and comfort level with science content and methods.

While most science teachers have majors in other science areas, a significant number are assigned to teach Earth Science once they get a teaching job. These teachers are often highly motivated to increase their knowledge of earth science, and need appropriate professional development opportunities such as summer institutes and graduate courses designed for teachers.