A Series of Profiles

"The difficulty with teaching Earth Science topics is trying to see the big picture...looking at it globally. [The students] don't have the world travel experience. They have a tough time identifying where Utah is let alone Greenland." 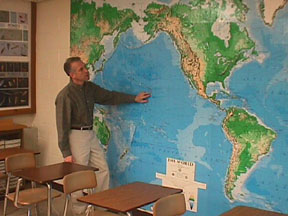 Geri Schlecht's 9-12 Life Science/5-8 Science certification and Master's in Education from Mankato State has enabled him to teach Biology as well as Science in the Environment and AP Environmental Science at Northfield High School. With a degree in anthropology and archeology and many years in the airline business before becoming a teacher, Geri brings a wealth of worldwide experiences into the classroom. Spending time in remote areas with archeologists, geologists and anthropologists during a two-summer field program through the University of Denver and the state of Colorado only deepened Geri's understanding of Earth systems. Although Geri does not teach a class called Earth Science, his Environmental Science classes provide him the opportunity to teach Earth Science topics as an integrated network.

"[Philosophically] I like to make sure that I instill in the students an interconnectedness between the different disciplines - life science, earth science, physical science."

The biggest challenge for Geri is find a way for students to learn through field experiences in addition to lecture and labs. In his student teaching experience at a charter school, Geri was able to spend a week in the field with the students to uncover late pleistocene mammal bones near Henderson, Mn. Now at Northfield High School with a class time of 50 minutes, field trips become complicated, if not impossible. Geri still contends though that if any student of Earth Science whether he/she be K-12 or college, is out in the field with a passionate instructor, a deep interest will be sparked. How to do this in the limited confines of traditional education would be a valuable discussion for Geri.