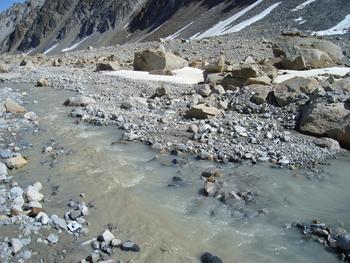 Hide
This stream is loaded with fine-grained sediments resulting in its murky brown color. The left side of the stream is slightly more turbid than the right side, as seen by the change in color. Photo by Monica Bruckner.

The turbidity of a body of water is related to the cleanliness of the water. Waters with low concentrations of total suspended solids (TSS) are clearer and less turbid than those with high TSS concentrations. Turbidity can be caused by high concentrations of biota such as phytoplankton, or by loading of abiotic matter such as sediments. Turbidity is important in aquatic systems as it can alter light intensities through the water column, thus potentially affecting rates of photosynthesis and the distribution of organisms within the water column. Lowered rates of photosynthesis may in turn affect the levels of dissolved oxygen available in a given body of water, thus affecting larger populations such as fish. High turbidity can also cause infilling of lakes and ponds if the suspended sediments settle out of the water column and are deposited.

How Is Turbidity Measured? 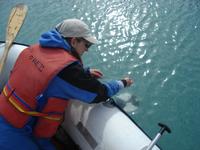 Hide
This researcher is measuring turbidity in a glacial lake using a Secchi disk. The disk is lowered into the water until it can no longer be seen, and the depth of disappearance is recorded. Photo provided by Monica Bruckner.

Turbidity can be measured using several methods. The easiest and least expensive method is through the employment of a Secchi disk. A Secchi disk is an 8-inch diameter disk with alternating black and white quadrants that is lowered into the water column until it can no longer be seen from the surface. The point at which the disk disappears is a function of the lake turbidity. A turbidity tube, or T-tube, can be used as an alternative to lowering a Secchi disk through the water column. The T-tube is a plastic tube with a small-scale Secchi disk pattern at its base. Water samples can be poured into the tube and the clarity of the bottom disk can be used to reveal turbidity.

Turbidity can also be measured using higher tech instruments that measure the scattering effect suspended particles have on light. Chlorophyll concentrations can also be quantified using a fluorometer to determine turbidity contributions from photosynthetic organisms.

Turbidity measurements can be used for water quality analysis in lakes and streams. Generally the more turbid a lake is, the less biota it will be able to support. Turbid waters inhibit light from penetrating deeply into water column and therefore negatively affect primary productivity and dissolved oxygen available to support other organisms.

How To- Making, Using, and Considerations Regarding the Secchi Disk

Secchi disks may be purchased by science equipment suppliers, but they can also be hand-made. Below is a set of instructions on how to make a Secchi disk, how to use it, and a list of considerations when analyzing data. 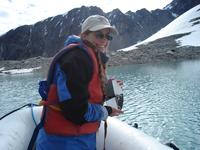 In general, lower turbidity is associated with cleaner, healthier water. Turbidity measurements can vary across different types of environments, so they are especially useful when comparing similar environments or the same water body through time. Some examples of Secchi depths provided by The Great North American Secchi Dip-In Records Website include:

Turbidity is a result of sediment load and biomass in a given environment, so while it is generally true that clearer lakes are cleaner, this is not always the case. For example, a glacial stream may have a large suspended sediment load resulting in high turbidity, even if it is clean. However, due to decreased light penetration a highly turbid lake may be relatively unproductive with respect to phytoplankton, since they need light to live. So, when interpreting Secchi disk results, one must consider other aspects such as possible sediment or pollution sources, nutrient loading, etc.