What Are Hydrological Tracers? 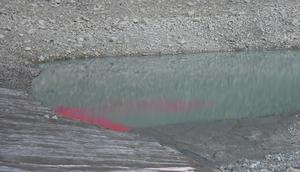 Hide
This rhodamine dye shows the water flow path from its injection point at the delta in the lower left corner of the picture. Rhodamine dye can also be used to calculate the water residence time distribution curve in the lake (how long it takes, on average, for a molecule of water to enter and leave a body of water). Photograph by Monica Bruckner.

There are several types of hydrological tracers that can be used to characterize a watershed. Common tracers include dyes, salts, and stable isotopes. These tracers can be added to a water body to help to constrain residence time, or the time it takes for a molecule of water to flow from point a to point b, to characterize the inputs and outflows of water (where does the water come from and where does it go), and to determine mixing and flow paths of water within a system (how it gets from point a to point b).

How Are Hydrological Tracers Used?

As stated above, several types of hydrological tracers exist that can characterize water dynamics within a watershed. Applications of these tracers include:

How Are Dyes Used as Tracers?

Hide
A rhodamine dye is added to a glacial lake inlet and its flow path is shown by the red color spreading throughout the lake over time. Samples were taken from the lake outlet stream (right side of picture) to determine the residence time of the dye/water in the lake. Image by Monica Bruckner.

A known amount of dye, such as Rhodamine, can be added to a water body and watched to determine its flowpath through the system and samples can be taken from a second point (e.g. an outlet stream from a lake) to determine the residence time. These samples, taken over a time interval, can be run through a fluorometer, which is a machine that can measure the transmittance of light through the sample. In order for this to work, one must also know the background transmittance of light through the water (e.g. a sample collected before dye addition) and the sediment load should not change measurably throughout the sampling period (so as not to introduce changes in light transmittance from reasons other than the dye). If sediment does present a problem, all samples can be filtered to remove the sediment. Samples can either be collected in vials or a fluorometer can be set up on a stream bank to measure real-time fluorescence changes in the outlet stream.

How Are Salts Used as Tracers?

Like dyes, salts can be used to measure residence time of waters within a system. A known amount and concentration of salt can be added to a system and measured from an outlet by changes in electrical conductivity or by measuring water chemistry via ion chromatography or a similar method. These methods can also hold true for groundwater tracers, but it should be noted that movement through ground water can also introduce salts to the samples, so knowing the bedrock geology of the study site can be helpful. When considering using ion chemistry to measure salt movement out of a system, it is also important to take into account the conservative nature of the salt. That is, is the ion measured leaving the system prone to biological uptake or reactions with water or sediment that would cause it to drop out of the dissolved state and hence not leave the system? Chloride represents a useful tracer, since it is relatively inert and not used by biota in a great degree. Nitrate would be a poor tracer, as it might be taken up by biota before it left the system.

How Are Isotopes Used as Tracers?

Stable isotopes present useful tracers for indicating sources and flow paths of water through a system. In general, groundwater is oftentimes isotopically heavier than "new water," or that water which has recently been added to the system through precipitation. In addition, the older the groundwater is, the heavier it is isotopically (in general) since the isotopically lighter portion is preferentially taken up by biota or evaporated. More information about the fundamentals of stable isotopes can be accessed at the USGS Isotope Geochemistry website. 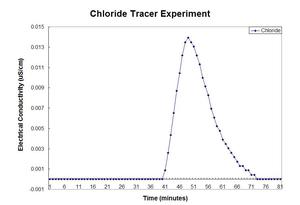 Hide
A theoretical example of graphing residence time distribution for a salt slug using a change in electrical conductivity as a function of chloride concentration. This graph indicates that the entire salt slug leaves the system over a period of time, rather than having a fractional tail. In addition, it shows that there is an initial lag time for the salt to leave the system, likely due to mixing, exchange, and distribution of the salt slug through the stream channel.

Water flow paths can be seen by viewing the route colored dye takes through a body of water. Average water residence times can be characterized by graphing the concentration of tracer measured leaving the system through time. That is, the amount of tracer (dye or salt) collected in discrete samples or measured in real-time can be analyzed with a fluorometer (an instrument that measures the amount of dissolved material by passing light through the sample) or a conductivity meter can be multiplied by the discharge (or volume of water flowing through a system through unit time) to determine how much tracer leaves the system in a given period of time.

A graph can be produced from fluorometry or conductivity data over time to determine the amount of tracer that has left the system. A curve is produced by graphing the amount of tracer measured against the time since the tracer was added. The amount that leaves is calculated by measuring the area under the curve. Oftentimes, this curve is heavy or fractally tailed, indicating that some tracer will remain in the system for a long period of time and may not leave the system at all (e.g. if it interacts with sediments or groundwater and does not leave the system via the outflow where data is collected).