Dimethylsulfoniopropionate [DMSP; (CH3)2-S-CH2-CH2-COOH] is an osmoprotectant synthesized by marine algae and vascular plants. As a consequence of senescence, grazing, and viral activity, intracellular DMSP can be released from algal and plant cells into the water column, where it undergoes microbial transformations. Bacterially mediated DMSP transformations can generate over 90% of oceanic dimethylsulfide (DMS, H3C-S-CH3), and DMS accounts for at least half of the global biogenic sulfur flux to the atmosphere. Along with its role as a precursor for DMS, DMSP is a ubiquitous source of organic matter in marine surface waters and can provide up to 15% of the carbon requirement of heterotrophic bacteria and fulfill most of the bacterial cellular sulfur demand.

(Mou et al., Applied and Environmental Microbiology, March 2005, p. 1405-1416)
The magnitude of the marine DMS emissions is all the more remarkable considering that over half of the DMSP released is demethylated and that a significant fraction of the DMS is oxidized by bacteria in the water column before it can be released to the atmosphere. While most of the biogenic sulfur emissions (primarily DMS) come from the oceans, those coming from salt marshes and coastal wetlands are many times higher on a unit area basis. DMS flux per unit area from these marine wetlands is also much higher than from any known terrestrial soil. 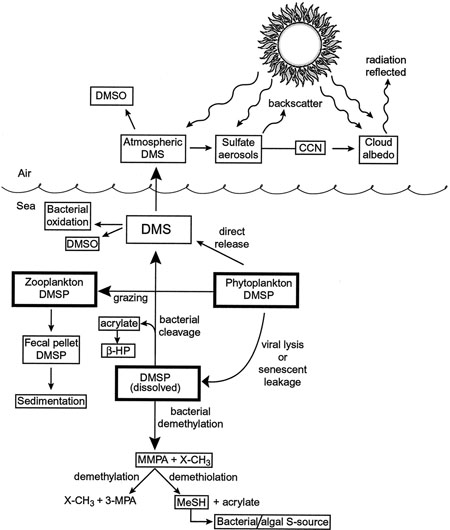 There is a considerable interest in DMS in the scientific literature that focuses on global climate. DMS is thought to play a role in the earth's heat budget by decreasing the amount of solar radiation that reaches the earth's surface. (from wikipedia.org)

Coastal salt marshes have one of the highest natural DMS emission rates and represent an active DMSP-degrading ecosystem. In this study, a culture-independent approach was employed to identify bacteria involved in DMSP degradation at the species level. Water was amended from a salt marsh tidal creek with DMSP and identified cells responding to the addition by Flow-Cytometric Analysis (FCM) (see methods) sorting of cells with elevated nucleic acid (NA) content. Methods were optimized to obtain DNA template from as few as 25,000 FCM sorted preserved bacterial cells. Terminal restriction fragment length polymorphism (see T-RFLP) analysis and sequencing of 16S rRNA genes in the sorted populations were used to identify bacterial taxa involved in DMSP degradation.


Copyright on all images and material by Mary Ann Moran, 2006.