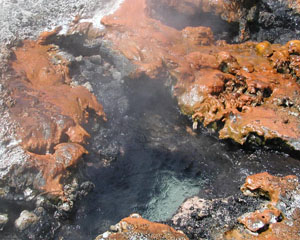 Understanding the origin of photosynthesis and life itself are fundamental, interesting, and important aims of this work. There is great fascination in the notion that photosynthetic pigments may have originally evolved to harness heat first—then light. Red Chloroflexi are one of an emerging handful of phototrophs that use pigments capable of capturing infrared wavelengths of energy (i.e. heat). Although many scientists argue that the first living things likely used inorganic chemicals as an energy source(i.e. they were lithotrophs), there is also a hypothesis that the first living organisms may have used heat and then light in the same capacity.