Project Significance (The Importance of Carbon):

"Carbon is what we (as well as all of the other plants and animals on earth) are made of (50% of our dry weight). Ecologists can learn a lot about ecosystems and what they do for us by constructing carbon budgets (or energy budgets) from measurements of productivity, food chains, and nutrient cycling". From Understanding the Global Carbon Cycle -by Richard Houghton, Carbon Research, Senior Scientist- Woods Hole.

Carbon is also of interest because, in the form of carbon dioxide (CO2), it is the major greenhouse gas released to the atmosphere as a result of human activities. The continued release of greenhouse gases is raising the temperature of the earth, disrupting the climates our agricultural systems and we depend on, and raising sea level. The concentration of CO2 in the atmosphere to date has increased by about 30% since the start of the industrial revolution sometime around the middle of the 19th century. This increase will continue unless societies choose to amend their ways.

Most of the increase in atmospheric CO2 concentrations came from and will continue to come from the use of fossil fuels (coal, oil, and natural gas) for energy, but about 25% of the increase over the last 150 years came from changes in land use, for example, the clearing of forests and the cultivation of soils for food production. From The Warming of the Earth -produced by The Woods Hole Research Center. 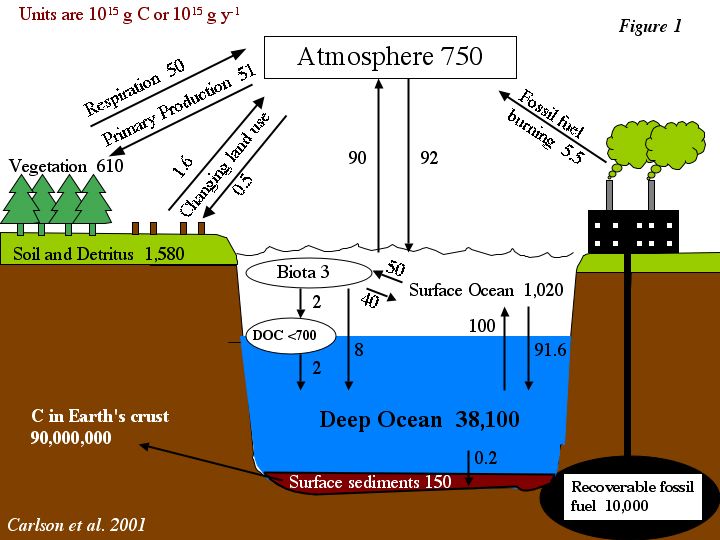 Microorganisms in the ocean surface layer play an integral role in the exchange of carbon between the atmosphere and the ocean. The global dissolved organic carbon (DOC) pool is estimated to be approximately 700 Pg C, a value comparable to the mass of inorganic C in the atmosphere. Small perturbations in the metabolism of DOC by microorganisms could strongly impact the balance between oceanic and atmospheric CO2. Thus, the microbial processes that determine DOC production, consumption and distribution in the oceans are vitally important to the global carbon cycle.