As we've already seen in Module 8, one increasingly viable strategy to address limited water supply is that of treatment and re-use. This can take a variety of forms, including reclamation and re-use of wastewater for industrial or consumptive applications like golf courses or parks, or treatment of wastewater to meet drinking water standards and re-use for domestic/municipal supply. The former constitutes a major element of Las Vegas's approach to maximize their limited allocation of CO river water from Lake Mead. The latter is becoming increasingly – though not universally - accepted as a way to increase supply, and has been implemented in several areas, including Orange County and even at Penn State!

The Orange County Groundwater Replenishment System (GWRS) is one well-known case study of wastewater reclamation for municipal supply at a relatively large scale (Figures 5-7). The GWRS plant is a 70 million gallon/day facility (72,000 acre-feet/yr), and generates enough potable water for ~500,000 people. The facility also solves the secondary problem of managing effluent to ocean because much of the wastewater that would otherwise be discharged offshore is captured and re-used. The facility takes advantage of proximity to the wastewater treatment facility to allow for low-cost and efficient "on site" treatment, and uses gravitational energy to transfer the water for treatment. The cost of the facility was subsidized by grants. With the subsidy, the cost of treated water is ~$400-500/acre-foot; even without the subsidy, the cost is competitive with imported (CO river) water at ~$800/acre-foot. 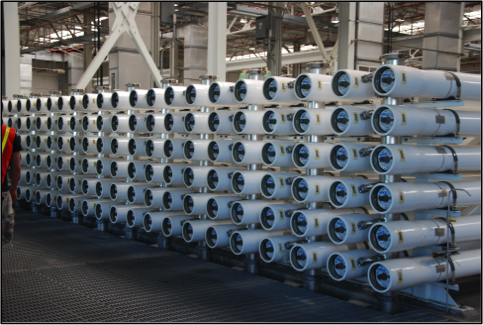 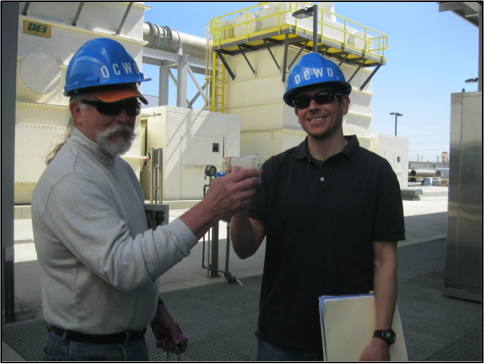 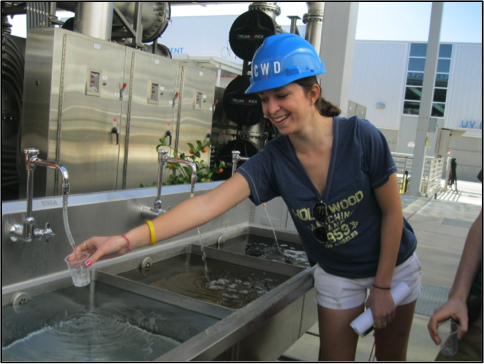 ×
Figure 7. Student L. Wandel sampling the treated wastewater at the GWRS at the end of a facility tour.
Photo credit: M. Ren.

Two key advantages to reclamation and re-use are: (1) the supply is by definition local, in that it was used by the same people who would use it again, and has already been captured for treatment. This substantially reduces the need for infrastructure and conveyance, and thus is highly efficient and reduces cost; and (2) the total dissolved solids (TDS) in wastewater are much lower than in seawater, such that the energy and cost are low in comparison to SWRO (Figure 8). 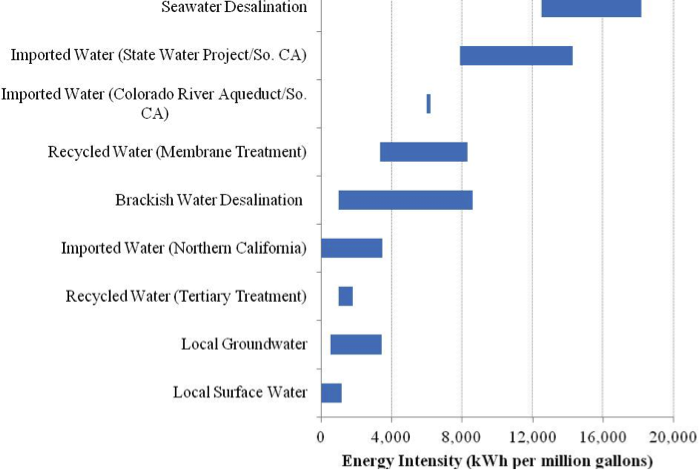 Another more local example is that of the Penn State "Living Filter", which has been in operation since the early 1960s, and in full-scale operation since the mid-1980's. The treatment facility captures approximately 2.5 million gallons per day (the total water use on campus at the University, plus a small proportion of water used by residents of the nearby Borough of State College). This water is originally sourced from a fractured limestone aquifer that underlies the region. Rather than treating the wastewater and discharging it to local surface waters (Spring Creek), the water undergoes primary and secondary treatment, followed be de-nitrification and minimal chlorination to ensure that any (unlikely) remaining pathogens in the water are killed, and then spray application in the aquifer recharge area. After treatment, the biological oxygen demand has been reduced by 95-99%. The term "living filter" refers to the thick (>50-75 foot) soil column that overlies the aquifer; the combination of physical processes in the soil, natural degradation by exposure to soil acids and UV, and microbial activity effectively "filter" the treated wastewater to meet drinking water standards. In total, the system is almost 100% efficient in the re-use of extracted groundwater, with ~1 billion gallons of treated water per year recharged to the aquifer.

Of course, there are some obvious drawbacks to water re-use, though these are arguably mostly psychological and rooted in the so-called "Yuck Factor". It is easy to forget that water is the ultimately reused product. The water in our rivers and oceans has certainly cycled through many organisms over the course of its history (think "dinosaur pee!"). The surface water that we think of as "clean" and which has historically been the dominant water supply for human consumption, hospitals, laundry, and other uses, is mixed with discharged treated wastewater from upstream communities. For that reason, we treat surface water before use. In this sense, why or how is directly treated wastewater any different? Likewise, rural domestic wells are often down-gradient of septic systems or leech fields, albeit a safe distance to allow natural degradation and filtration in the soils and aquifer system. Fundamentally, this raises the question of whether we would rather drink and do our laundry with water that was once our own wastewater, or somebody else's.